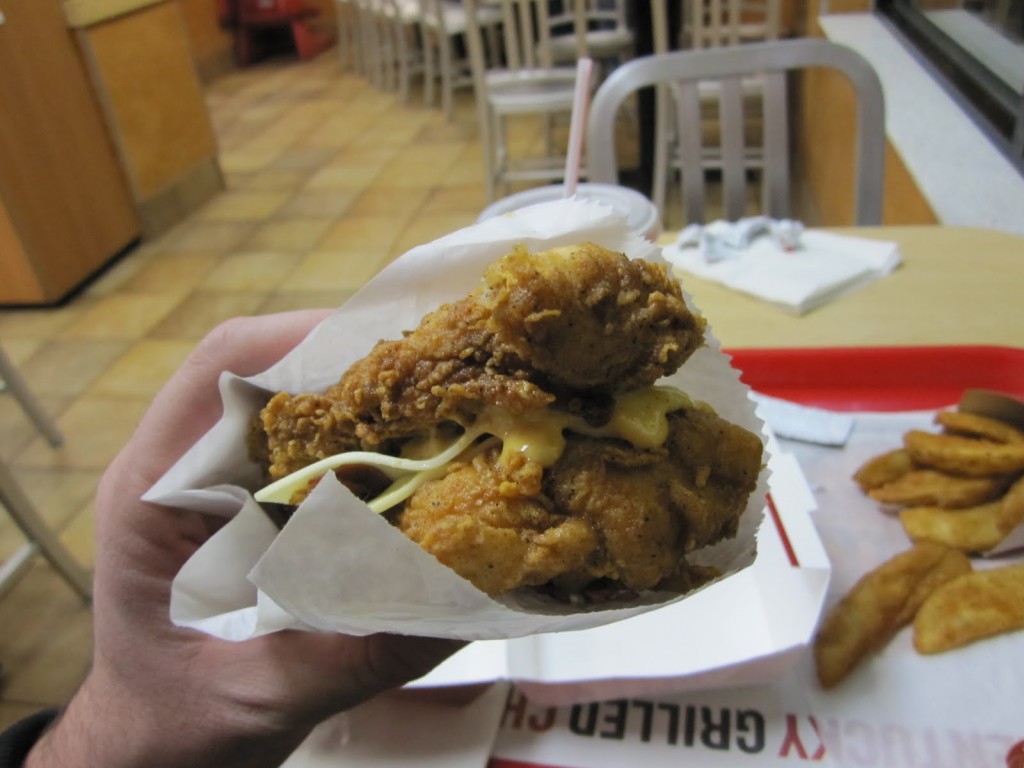 THE CONQUEST
When life gives you lemons, you’re supposed make lemonade. So when KFC gives you a Double Down, you should make like a fat, disgusting, bloated bastard and in this particular case, drunken bastard and take one down!!

If you’re reading this and you have no idea what at “KFC Double Down” is then either…
A. You don’t live in the US.
B. You didn’t go to Yahoo! or Twitter today when it’s release became a trending topic.
C. Burger Conquest is your only source of news.
(I’m actually ok if “C” is the case!)

Regardless, in the name of good journalism, I will explain. KFC, the popular American-based food chain that primarily sells fried chicken, released a new product to the market today. It’s called the “Double Down,” – “two 100 percent all white meat chicken filets topped with cheese, bacon and the Colonel’s Sauce.” For those of you doing the math, that’s 540 calories, 32 grams of fat and 1,380 milligrams of sodium. You can order the chicken breaded and fried or for the “health conscious,” grilled 460 calories, 23 grams of fat and 1,430 milligrams of sodium.) It’s the KFC / Chicken version of In-N-Out’s “Protein Style” burger.

Monday, April 12th, 2010 was set as the date that the Double Down explode into the market place and your waistline. Somehow, not to be outdone, the KFC in New York’s East Village was serving them the night of April, 10th. As much as I would like to tell you that I am just that plugged into the NYC food scene, it’s just not the case. Truth be told I was out boozing it up at a local whiskey-tank and needed a breath of fresh air. I decided to pick up the night with an energy drink and as I rounded 2nd Avenue onto 14th St, heading for a bodega, I spotted it right the Double Down is here sign in the window. If This Is Why You’re Fat had a Bat-Signal to alert “Gotham City” that danger was a foot, THIS WOULD BE IT!!!

THE DOUBLE DOWN
The calling was too great and resisting was pure fried futility. I wandered in and ordered not only the Double Down, but also the accompanying meal of potato wedges and of course, a Diet Coke. Thus bringing my intake totals to 800 calories, 45 grams of fat and 2,120 milligrams of sodium!! I took a hold of the bun-less sandwich with my signature Burger Conquest Left Hand Grab and shoved it in my face.

The first couple of bites were pure magical discovery. The batter was crispy but not too heavy with a salted and peppered bread taste. The sauce was tangy like mayonnaise meets BBQ sauce and or ketchup. The two slices of cheese and 2 slices of bacon made for a very salty center. It was like a pile of crunchy sodium and grease with a gooey sodium center. By the time I got to the end of the sandwich, I couldn’t take a bite without immediately slurping down some Diet Coke after. The sandwich was overwhelming in every definition of the word. In fact, I was at a loss for words as a re-reading of my live Tw-eat revealed; ” http://twitpic.com/1ernm3 – #KFC #DoubleDown #Fat #HelpMe”

I can only imagine how pitiful I looked – sitting there by myself in a KFC, drooling over a sandwich, drunk and taking photos. I finished up the sandwich (but not the wedges), slammed my Red Bull and my 5 Hour Energy and walked back into the bar. No one had even noticed I was gone and no one had any clue. In less than an hour, the Double Down had taken it’s toll and despite the high levels of caffeine and liquid stimulants in my body, I was on my way home. My body felt like a battery that was quickly losing it’s energy. I slept for nearly 8 hours (I average around 5-6) and wasn’t hungry again until dinner time the next day.

It’s 2 days later and I pretty sure my veins are filled with strips of bacon riding around in a river of the Colonel’s sauce. 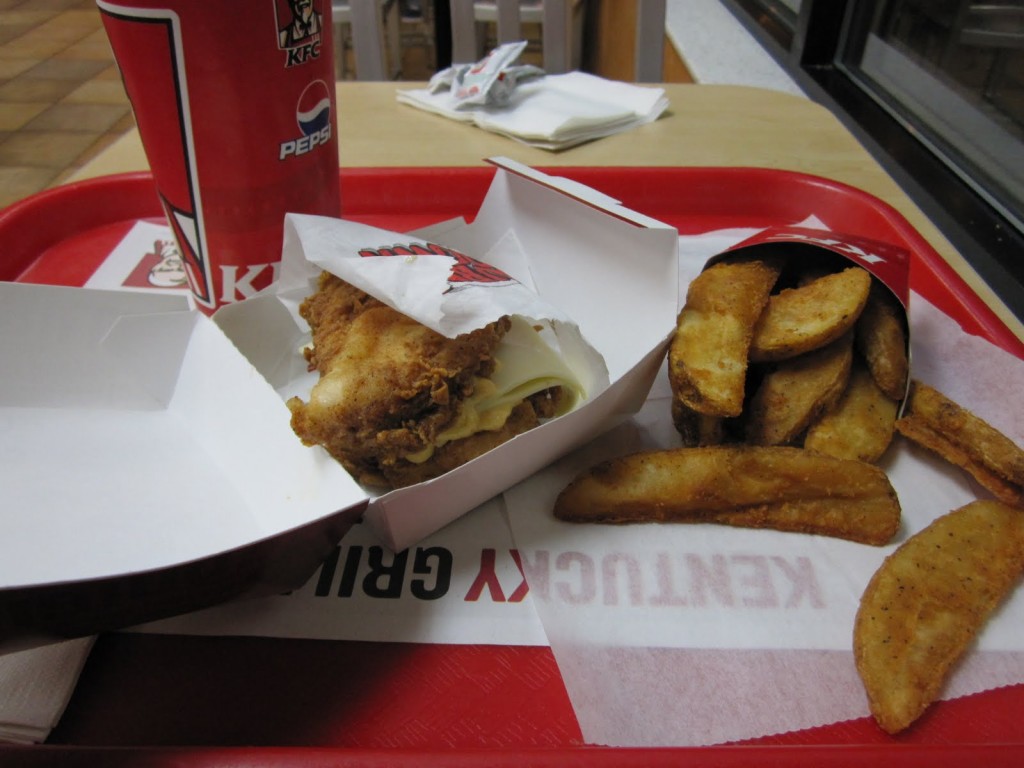