Molly’s Pub and Restaurant – Don’t Be a Hoser, Eat This Burger

THE CONQUEST
Poking fun at Canada’s (or as I like to call it, Soviet Canuckistan) expense is a lot like eating burgers. There’s never really a BAD joke about Canadians, just some are better than others. Ordering a burger from a restaurant’s menu is a lot safer bet than something you are less familiar with. There’s safety in either. Having said that, there are good Canadian jokes and GREAT Canadian jokes so why not strive for the latter when you can?

Friend to the burger and my business partner Adam M. is originally from Canada and there isn’t who won’t jump at the chance to crack a Canadian joke at his expense. For as goofy as he is, at heart Adam is a really good guy and a lot of fun. He also can take a joke and considering how many come his way, he has some really thick skin, either that or his brain still hasn’t thawed out. With Adam’s birthday upon us I figured no better time than to hold a Burger Conquest and also take an opportunity to poke fun at his native land.

Last year for Adam’s birthday we threw a BBQ on his roof and I made everyone my “Happy Birthday Bacon Burger Surprise.” This year we decided to pay a visit to Molly’s Pub & Shebeen. Fellow Burger Conquester, Jim L. swears by the place and A Hamburger Today declared it an “awesome pub burger.” Molly’s claims to be “NYC’s Most Traditional Irish Bar” and with that much conviction and back up, all signs pointed to eating a burger at this 125 year old establishment.

Molly Malone’s originally opened in 1895 and has stood it’s grown since. During prohibition it converted to a grocery store for 13 years, returning to serving booze in 1933. For years, the upper floors in the building served as a rooming house for transient workers. In 1991, after a transfer of ownership it was changed to it current name. A “Shebeen” is more commonly known as a “speakeasy.” Molly’s serves traditional Irish Pub fare including a whopping 10 ounce burger. It’s a great place for a pint and a burger, as well as an opportunity to make fun of Canada…but more on that later.

We gathered up in Molly’s small yet deep dining room which is covered in saw dust and waited for our table to be ready while sipping Murphy’s Irish Red. They have their own working fireplace as well as a very interesting collection of old photos, memorabilia and antiques. While there is an “Irish Pub” on nearly every other corner of this city, Molly’s Pub is the diamond to their Cubic Zirconia. As a rather small establishment, seating 15+ people TOGETHER was no easy task but the incredibly attentive and welcoming staff at Molly’s did their best to accommodate us.

THE BURGER
I’d heard from many sources that the burger here was a good one and when mine arrived in front of me, I began to question all the hype. It was huge, thick and served on a sesame seed roll but if you had asked me to judge it before my first bite, I would’ve claimed to be charred and overcooked. However, one quick slice of a knife revealed otherwise. While the outside was indeed charred, the inside was an amazing, perfectly cooked medium-rare burger. I was amazed. As a rule of thumb, the thicker the meat, the harder to cook medium-rare. Covered in melted American, this pub burger was crying out my name.

The meat is coarsely ground, which gives it a more chewy texture when charred on the outside. The ground beef is not so tightly packed which allows your chompers to easily section off bite after tasty bite. It’s a hearty burger, to say the least, made with freshly ground beef. It’s dripping with that old-school pub burger flavor that we have come to love so much in this city. To say I was impressed is an understatement; I was surprised, satisfied and guaranteed to be talking about this delicious burger for quite some time. I got mine with onion rings, which I wasn’t excited about and also, some thick-cut, skin-on French fry potatoes that were the clear winner in the battle of the two.

Now what about the Canadian joke? While Adam thought we were all taking him out just to wish him a happy birthday, it was really just another excuse to make fun of Canada. Adam. All a glow, when I told him I had a birthday present, busted it open with baited breath, only to reveal a “Hoser Hut” t-shirt. If there are any “How I Met Your Mother” fans out there, you know the “Hoser Hut” to be the Canadian themed bar that Robin visits in NYC when home sick for her Canadian roots. No TV show or movie nails the Canadian cajoling on the head like “How I Met Your Mother,” much like no other bar in NYC Nails the pub burger on the head like Molly’s Pub and Shebeen. 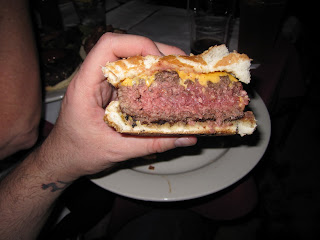 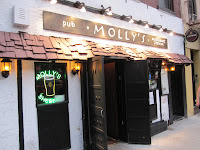 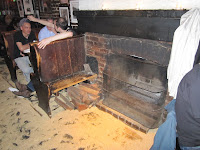 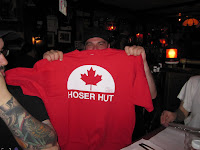 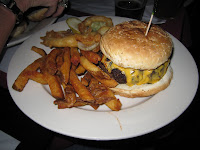 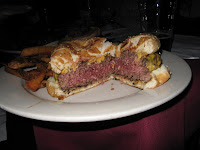 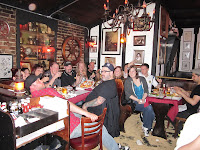 And now, some bonus Adam / Canadian jokes for you hosers, eh?

**
An Englishman, Adam and an American were captured by terrorists.

The terrorist leader said, “Before we shoot you, you will be allowed last words. Please let me know what you wish to talk about.”

The Englishman replied, “I wish to speak of loyalty and service to the crown.”

Adam replied, “Since you are involved in a question of national purpose, national identity, and secession, I wish to talk about the history of constitutional process in Canada, special status, distinct society and uniqueness within diversity.”

The American replied, “Just shoot me before the Canadian starts talking.”

Adam came to work one day, walking with an awful limp. I noticed the limp and asked: “Adam? What happened to you?”

Adam replied: “Oh it’s nothing really. I just have an old hockey injury that acts up every once in a while.”

Adam: “I don’t. I once lost a hundred bucks betting on the Maple Leafs and I put my foot through my television.”

How do we know Adam is Canadian? He only knows three spices: salt, pepper and ketchup.

It’s Game seven of the Stanley Cup final, Toronto vs Montreal, and a man makes his way to his seat, right down at centre ice. He sits down and notices that the next seat is empty. He leans over and askes his neighbour if someone will be sitting there.
“No” Adam replied, “that seat shall be empty.”
“That is incredible!! Who in their right mind would give up a seat like this and miss the final game of the playoffs!?!?”
Adam says, “Well actually that seat belonged to my wife, she passed away and this is the first game we haven’t been together to since we were married in 1967.”
“Oh I am so sorry, but you couldn’t find anyone who would want to take this seat?”
“No” the Adam said, “They are all at her funeral!”

**
Adam is in a bar sitting by himself and starts to get friendly with an Englishman and a American both having a beer. They got acquainted and started talking about their problems with their girlfriends.

The guy from England began by saying: “I told my girlfriend in no uncertain terms that from now on she would have to do her own cooking. Well the first day after I told her, I saw nothing. The second day I saw nothing. But on the third day when I came home from work, the table was set, a wonderful dinner was prepared with wine and even dessert.”

Then the man from America spoke up: “I sat my girlfriend down and told her, that from now on she would have to do her own shopping and also do the cleaning. The first day I saw nothing. The second day I saw nothing. But on the third day when I came home, the whole house was spotless, and in the pantry the shelves were filled with groceries.

Adam was seeing to an enlightened woman from the prairies… He sat up straight on the bar stool, pushed out his chest and said: “I gave my girlfriend a stern look and told her, that from now on she would have to do the cooking, shopping and housecleaning. Well the first day I saw nothing. The second day I still saw nothing. But on the third day, I could see a little bit out of my left eye.”

2 Responses to Molly’s Pub and Restaurant – Don’t Be a Hoser, Eat This Burger