THE STORY
Carl’s Jr. began as a hot dog cart in the 1940s and since has grown into one of the biggest fast food chains in California. In 2000, Carl’s Jr was the first fast food restaurant to serve a sit down restaurant style burger, called “The 6 Dollar Burger” to their menu. On February 11th, 2009, in response to the Burger Conquest Twitter, Carl’s Jr. replies “CarlsJr @BurgerConquest If you’ve never had a Carl’s Jr. burger, try the Western Bacon Cheeseburger, a classic; also the original Six Dollar Burger 12:10 PM Feb 11th from web in reply to BurgerConquest” On February 12th, after an evening of celebration with friends, we stop at a Carl’s Jr. Jr. (a smaller version of the restaurant that is drive-thru only) to do as we were told.

THE BURGER
For a fast food burger, I have to say this was pretty good. Carl’s Jr. makes a nice attempt at a non-fast food feeling burger that in the end, is still a fast food burger. I found the red onions to be really over powering and the meat itself, was cooked more than my liking. Judging on fast food burgers only, this one ranks pretty well. 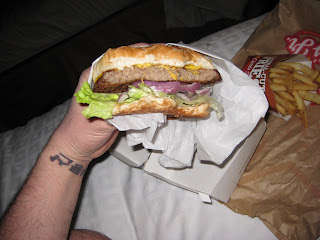 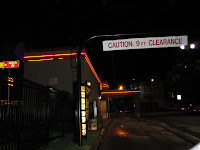 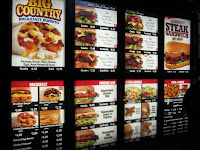 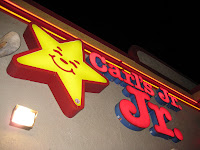 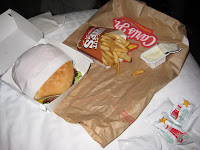