THE STORY
My wife and I are obsessed with the the TV sitcom “How I Met Your Mother.” If you haven’t seen it, start, it’s the hilarious story of 5 friends in NYC who drink, party, and live the sometimes wacky life that most people come to this city to seek out. In the latest season (4) they had an episode entitled “The Best Burger In New York” and as you can probably guess, it’s our favorite. Today while at the apple store, I mentioned we were near the Corner Bistro (mentioned on the episdoe) and Cara, out of a curiosity built from the show, jumped at the chance to try the burger. Having been to the Bistro before, I warned her that it didn’t stand up to the hype, which the Corner Bistro is all too happy to tout themselves (see photo or front window) but was more than happy to go in honor of her curiosity.

THE BURGER
The menu at the Corner Bistro is pretty simple, burgers, BLT, chicken sandwich and fries. We bother ordered the Bistro Burger medium rare and a side of French fries. The Bistro Burger comes on a sesame seed bun with onions, pickle slices, American cheese and A LOT of bacon. They use a really delicious quality of bacon but I have to say once again, the beef was just kind of plain. It’s a good burger, don’t misunderstand, it just isn’t as awesome as people would lead you to believe. Clearly there is a lot of hype as our neighboring tables were all foreigners stopping in to try the burger. To help them on their quest, I pointed them to my favorite NYC-based Burger Site 😉 And much like the last time I was here, the server was not attentive whatsoever. I had to walk up to the bar or flag down the waiter every time I needed something. 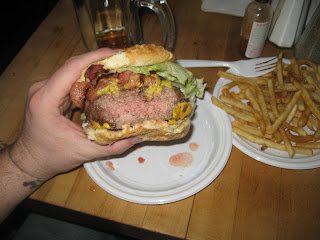 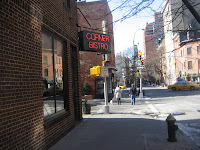 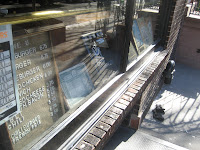 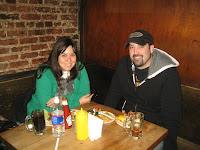 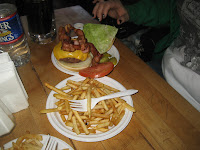 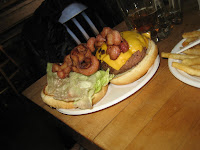 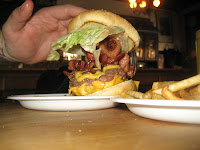 2 Responses to Corner Bistro – If At First You Don’t Succeed, Fry, Fry Again