THE BURGER
So what do we call this? Meating of the Minds? The NYC Burger Con? The Burgermeister’s Bash? Group Therapy? Burgers Anonymous? You could but I just call it..

You read the blog, you’ve eaten the burger and you know we gush like too much Shack sauce over the tasty treats available to you at the Shake Shack. So rather than spew drivel on about how out of this site the combo of 25% brisket + 25% chuck + 50% sirloin comes together to make the Shack burger so good, let’s talk about what goes into a few paragraphs and photos for your enjoyment.

We all met up in line at the Shack in Madison Square Park and played a little game of “get to know my blog.” We had more than enough time as the line was all the way around the back of the park, which on a day this nice, is no shocker. Once we were sat with our cardboard boxes full of happiness, the magic begun. Whereas most people would just chomp down on the vittles, us “foodies” bust out with cameras for a little game of “slap and pickle.” Pain stakingly staving off our desires to go face first into the food, we maintain our journalistic oath to bring you good burgers.

We’re such nerds. Not only is everyone else in the park laughing at the “tourists” taking pictures of their food, but Adam from AHT gets recognized. I was secretly jealous.

Some good food, some good talk, some good ideas and the promise of meeting up again and next time…destination, Trailer Park.

And now for a little game of “if you tag my blog, i’ll tag yours.”
A Hamburger Today
Burger of the Month Club
Good Eater

Not in attendance but invited. AKA sorry suckers, Maybe next time!
Hamburger America
The Feedbag
Beef Aficionado

Thanks burger buds, it was awesome. Until we meat again, Shake Shack it easy. 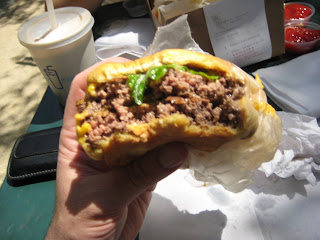 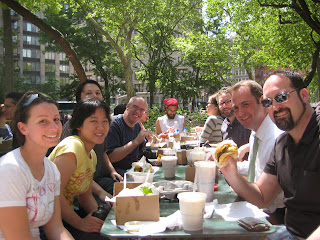 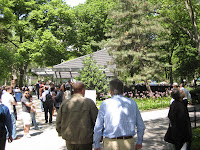 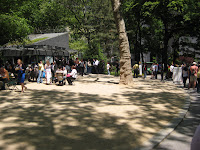 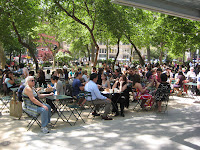 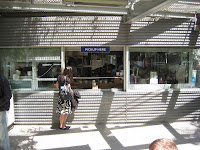 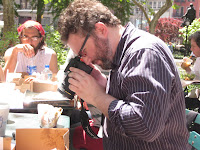 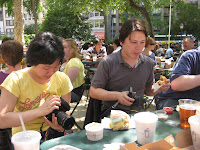 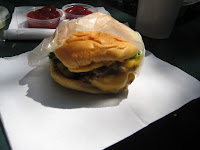 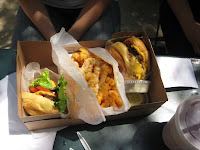 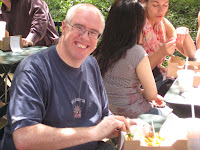 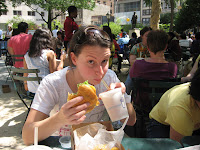 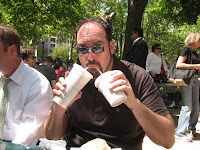 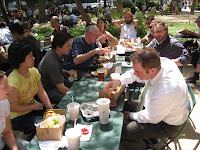 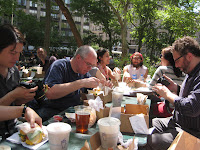