Oddfellows – The Bambi Burger That Changed My Life

THE STORY
Adam and I were hangin’ out in Toronto with our friend Greg and fellow Burger enthusiast Scott “Scoeb” Middelton from the Cancer Bats. No surprise, someone suggests a burger. Scott says “we have to go eat at Oddfellow’s. My friend Matt makes a mean venison burger.” With 2 of my favorite words in that sentence, burger and venison, there was nothing that was going to come between me and that burger.

Oddfellows, the creation of Matt Matheson and Brian Richer has only been since the fall of 2008. With the 20 foot gun barrel lighting, the $600 chairs, masked head of Lady Justice, only one long table and other odds and ends, this place lands somewhere between an odd art project and a gourmet restaurant and a high-end hipster dive feel. The word “unique” does not do it justice. The short menu is made up of 100% Canadian made grown items and ranges from quail to venison, to buffalo and a wide array of sauces and preparations. It all looked very intriguing but for me there was only one item to get…

THE BURGER
With a glass of Delerium Tremens in my hand, I anxiously awaited Mattheson’s sandwich creation. Just looking at gave me a woodie! I bit in and almost cried. Why? All I got was a mouthful of bacon. Gimme the venison! OH MY GOD. Seriously. Was this for real? Was I actually eating a burger that quite possibly was hand delivered from the burger gods themselves? I made sure not to eat it too fast because I wanted to savor every juicy and flavorful bite. The bacon, Gruyere and field greens merely accented, not over-powered, the taste of the burger. Adam said it tasted a little gamey. Well, it is venison, that is how it tastes and I LOVE IT. Words can not describe this amazing burger.

Mattheson came over to see how we were doing. I almost humped his leg but wasn’t sure if he would see that as a thank you. He asked if we wanted to try the venison tartare which is raw meat and in this case, mixed with jalapeno, cheese and spices. I like my meat medium rare but uncooked I am pretty iffy on. Served with garlic toasts, Oddfellow’s venison tartare is unreal. I hesitantly took a small bite. The flavored exploded in my mouth and I instantly dug into more. It was unlike anything I have ever tasted!

SCOTT MIDDLETON FROM CANCER BATS
So, The Rev is in Toronto, and finally I get a chance to tell him where we should eat, rather than me always asking him the best place to go for eats. So I think to myself, we probably shouldn’t just go anywhere, or somewhere he’s been before. I needed to find some place that was a cut above. I suggest we go to Oddfellows where one of my best friends Matt Matheson is the head chef. I’ve only been a few times, once was an all you could eat Taco night, and the other I tried his Buffalo Meatloaf with homemade creamed corn(It was fantastic). So I casually mention that we should go to Oddfellows to Rev and let it slip that they serve a Venison burger. I immediately hear the tires in The Rev’s mind as it is favorite meat! So, even though we got wind of a party of 50 coming in we head down as fast as we can, and manage to snag a spot at the single very long table that makes up Oddfellows’ dining room. After discussing the toppings Rev and I choose the burger, he goes for a more streamlined approach, but I go for the house works, Bacon, gruyere cheese, Portobello mushroom, mixed greens, homemade ketchup & relish. I know Matt’s a good chef and would serve it medium rare if we didn’t otherwise specify, and they come out huge and skewered with a large tooth pick containing a jalapeno pepper, a dill pickle and an olive. Rev passes me his dill pickle and I graciously accept. Also included are perfectly crispy dark brown french fries which are delicious and peppery just the way we love em! Now, much like Rev the burger is so big it takes a few bites to get right into the heart of the Venison, but by bite number 3 or 4 you’re in complete heaven. All the flavour of the wonderfully cooked patty blends perfectly with the smokey Canadian bacon strips and the Gruyere. The Portobello mushroom was soaked in balsamic vinegar and with the mixed greens make it delicious and unique. We both agreed, this is one of the best burgers we have ever eaten. The bun was perfect, the relish and ketchup added perfect flavors to the mix, and we just didn’t want it to end! Matt came out and asked how our food was, and I thought the Rev could have kissed him! haha.

Matt let us also try his venison tartare which was easily the best tartare I’ve ever tried.

Brian, the owner of Oddfellows later Invited us out to the restaurant’s winnebago for some drinks, complete with a woodburning oven, and CCR blasting over the vintage tube hi fi stereo. A perfect way to end an evening eating one of the best burgers I’ve ever eaten.

I’ll skip the funny little tie up sentence and just say simply this;
YOU HAVE TO EAT THIS BURGER! 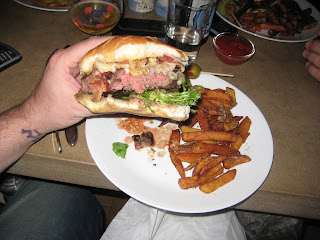 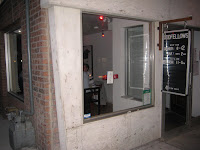 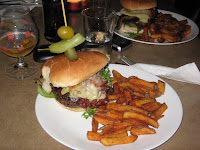 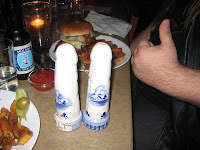 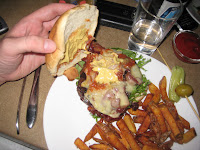 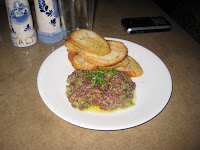 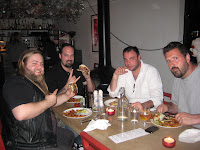 THE TRAILER
While finishing up the meal, I asked Mattheson about the lay out of the restaurant. I thought it was odd (pun intended) that they only had 1 long table. That’s when he told us about the trailer. The trailer? YUP. He took us out back to see the thing in all it’s beauty. He said had he known, he would’ve sat us in it. Created for an art display, Richer refurbished the interior with a wrap around fur couch, guitar amp, tube amp / record player combo, gas burner and WOOD BURNING STOVE! How the hell do you have a wood burning stove in a trailer? I was mystified and excited. “Wanna drink some beers and listen to records?” Mattheson asked. HELL YEAH WE DID! They brought out some Molson Stock Ale’s (my new fave beer) and put CCR on the player. We sat, maxin and relaxin to some sweet tunes and good beers. When the album ended, Mattheson put on Iggy and Stooges. Was this real? Did I really just have the greatest burger and was now sitting in a Winnebago restaurant listening to some rock and roll while sippin on beers? Yup, my friends, life is good.

Go to Oddfellows. Ask for Matt or Brian, tell em Rev sent you and maybe you’ll get to chill in the sweet ‘bago. 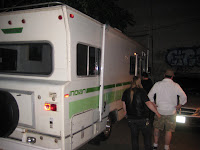 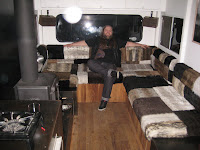 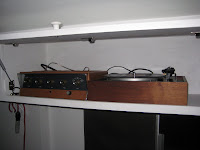 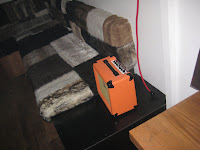 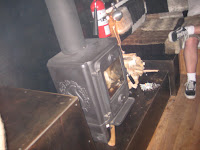 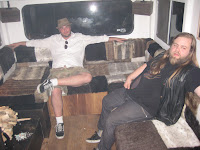 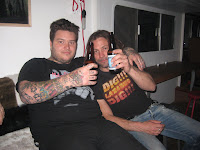 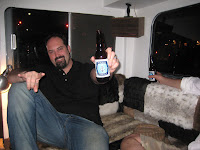 1 Response to Oddfellows – The Bambi Burger That Changed My Life