I was a little surprised because Scott lives in LA, but he’s referring to The Burger Joint at the Parker Meridien Hotel in NYC. It’s a great burger but when Scott suggested a 1 pm lunch, I told him no way. The line would easily be 60-90 minutes and I just didn’t have that time in the middle of the work day. Scott loves himself some beef and I did not want to disappoint so I suggested celebrity chef’s Bobby Flay’s Bar Americain. We had business to chat about anyway, even though Scott was in town to attend the Yankees World Series games. Bobby started his career off at famed New York City theater district’s Joe Allen’s on restaurant row at the age of 17. From there he attended school at the French Culinary Institute where is now a master and has gone on to create a string of successful restaurants and cook books, none of which I have ever eaten at or read. It was time for the shame to end. Bar Americain is Bobby’s American Brasserie and since the guy also has his own burger chain, I figured it was a safe bet.

THE BURGER
After a quick peek at the menu, I looked at Jackie and said “damn! That Grilled Pizza with Smoked Bacon, Caramelized Onions and Toasted Garlic sounds great!” Jackie agreed and we chose to go, as my Dad used to say, “justa-justa,” on the pizza and a Burger Americain with Gruyere. The burger arrived on a platter with 3 sauce pots (ketchup, mustard and roasted reed pepper) in sauce pot holes, I thought that was pretty nifty. The burger was cooked absolutely perfectly and was a site to behold on it’s sturdy yet soft sesame seed bun. I was a little weirded out by the grilled onion that was refrigerated and decide to 86ed it from my sandwich.

Mmmmmm. It was juicy yet not greasy and full of quality saltiness that one expects in a burger. Gruyere is a great cheese and the slice on this burger definitely good but I wish I had opted for the more intense flavor of cheddar cheese. The red pepper spread was so good that I didn’t even bother with the mustard. I even took to dipping the greasy and delicious french fries into it.

As for the pizza…holy moley…I want to take this home and raise it like my own. It was amazing! The bacon was amazing and exploding with great salted pork flavor. Mix that with salty cheese and salty garlic and you have on savory party happening on your tongue! I don’t know what kind of olive oil they used to make it but I want to buy a bottle and never use any other brand again! I was really glad we decided to go halfsies on it!

Mr. Flay, you have made one tasty burger and I looked forward to someday eating at your burger palace. 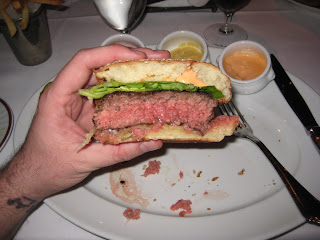 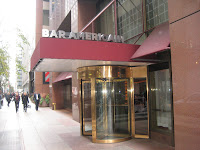 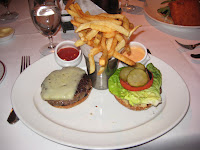 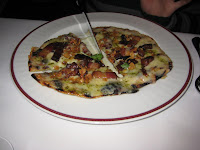 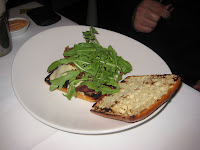 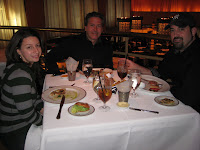