THE STORY
As if 3 hours of Wing-Off wasn’t enough, we wanted to keep drinking so Mark lead us to a neighborhood haunt, literally. Nick named “the Red Hand,” legend tells the story of a man who loved Ulster, Ireland so much that he cut off his hand to become king. The Red Hand can be found on the flag of Northern Ireland as well as many other places of dignity. But that probably isn’t why the name of this Upper East Side pub / restaurant rings your bells. In 1986, Robert Chambers Jr. murdered an 18 year old girl, Jennifer Levin, that he had met in the bar, thus earning him the nickname “Preppie Killer.”

THE BURGER
I actually had no plan to eat but when the waitress told us that the Dorian’s “World-Famous” Burgers were made fresh, served on English Muffins (MY FAVE!) and the best she ever had, we ordered some to split for the table. I got the “Red Hand” with Smoked Ham, Cheddar Cheese and Grilled Onions. Russel T. went for the house specialty; the “Ragin’ Cajun” served Cajun-Spiced, topped with Pepper Jack Cheese, Jalapeno Relish, served with a side of Cool Ranch Dressing.

I love burgers like this. Nothing like that old-school, backyard bbq, father made, pub-style burger. Big, juicy, fresh and with a natural beef flavor. It’s the burger my childhood is based around. The English Muffin only option for bread scores huge points with me. The burger was over cooked and there were too many Grilled Onions but those are 2 problems easily rectified. Other than the history of manslaughter, the story to tell about Dorian’s is the “Ragin’ Cajun!” Not at all what I expected, this burger with it’s toppings tasted more like a gyro or shawarma then a regular old pub burger. The Pepper Jack Cheese, the Cajun Spices and the delicious Jalapeno Relish mounted a fantastic spicy battle against the cooling taste of the Ranch Dressing. I was really impressed. Even as I write this, I want to go back for another, hold the murderers. 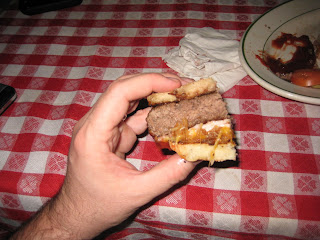 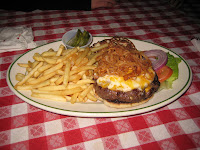 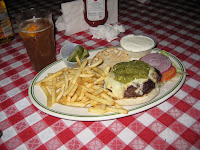