THE CONQUEST
My wife and I were flying Continental Airlines from Detroit to San Diego to visit some friends of ours for New Years Eve. We had to change planes in Houston and decided to get a bite on our layover. Throughout the holidays we had been eating as though it was the first time we had ever seen food so in trying to make a healthy choice, we both got salads.

As we boarded the flight, much to our surprise, we both got upgraded into first class seats. I jokingly said to Cara, “watch, after we tried to be all healthy, we’re gonna get served a NY Strip steak like our friend Joe C from SteakClub7.” When the stewardess came around to take our lunch order she said, “today we have corn chowder soup and your choice of a salad with grilled chicken or we have an Angus cheese burger.” We both laughed.

As it’s my journalistic duty to advise you on burgers, I went against my better health needs and ordered the burger. I hope you appreciate it.

THE BURGER
A few moments later we were snacking on an appetizer of almonds and sipping a tiny glass a of wine. The flight attendant then brought us our lunch trays (burger for me, salad for my smarter half.) The corn chowder was good and as it’s named stated, corn was most certainly the overwhelming flavor.

The burger looked pretty appetizing. The patty appeared to be juicy and charbroiled. I asked the flight attendant if she knew how the burger was prepared and if it was fresh or frozen. She informed me that they come precooked and other than re-heating it, she knew nothing else. The burger was served on a sesame seed bun with a slice of cheese on the bottom (just how I like it) along with a little tray of toppings and a mustard and ketchup packet. I slathered on some some mustard, added the red onions and went in for a bite. Hmm. Not bad. It had a natural salty beef flavor, the bun was decent and the cheese was as well.

Was it the best burger I have ever had? No. But I certainly am hoping I get served it every time I fly Continental again!

As with most Continental Meals, a dessert was included. For this on in particular, it was a Cookies and Cream Brownie. Now I’ve eaten a lot of brownies in my life but never one that was basically infused with an Oreo cookie. There wasn’t even time for curiosity to find the cat, much less locate it before I tore open the wrapped and took a bite. Wow. It was sweet, moist and had a delicious mix of sweet tastes. If it came to a vote to change the brownie standard from chocolate to cookies and cream, you could count on my vote! 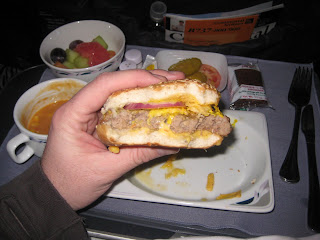 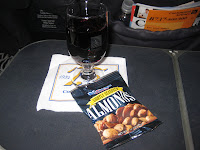 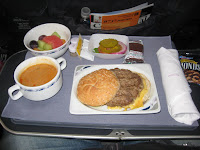 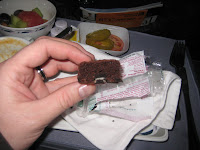 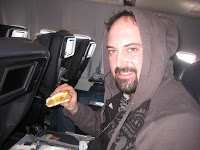