THE STORY
While out all day looking at new apartments, my wife Cara looks at me and says “I’m hungry and I’m craving a burger. Let’s go somewhere you haven’t been yet.” For me, that is the equivalent of Commissioner Gordon turning on the Bat-Signal. Ever since I read Nick Solares from The Beef Aficionado‘s review on A Hamburger Today, I wanted to try out HB Burger. Thank you Cara for giving me the excuse.

HB is a division of the Heartland Brewery, NYC’s first American style brewpub. They offer all of the Heartland Brewery’s standard brews and their seasonal ones as well. The place has the same pub feel as Heartland with wood every where, exposed brick, vintage beer paraphernalia and your choice of stools at the bar or tables. We opted for the formality of table service until we had been seated for 15 minutes without so much as a drive by from a waitress. Sure enough, as soon as we picked up our bags and coats to move to the bar, a member of the wait staff came over. We moved anyway. Within only a few moments the bartender had drinks in front of us and taken our food order. I have to give him massive kudos for being one of the most attentive and friendly bartenders I have ever seen in NYC.

The menu at HB Burger is a smattering of assorted burgers with veggie, tuna, turkey and even bison patty choices. There are also a number of interested specialty burgers, ranging from kobe to buffalo style, crab cake and fried chicken. Me, I went right for the “HB Burger.” “HB beef is supplied by a local, family-owned steak purveyor. Our custom blend from prime angus steers includes cuts of flank, chuck, and prime rib. Served with chopped lettuce and tomato.” I topped it with cheddar and sautéed onions while asking it to be placed on a whole wheat bun. Sounds good, don’t it!??!? We decided to share the tater tots made with smoked slab bacon and jalapeño jack cheese. Sounds ever better.

THE BURGER
Nick’s mouth watering review biting at the back of my brain had me practically drooling when the burger showed up in front of me. I opened the bun to inspect and add some mustard only to discover a bonus item; mushrooms. BLECCHHH!! I have a rule about ‘shrooms; I don’t eat what I can grow between my toes. NO FUNGUS. I pointed it out to the server who quickly put in an order for another burger.

I shifted my focus to the tater tots. Tater tots have a certain shape, crunch and flavor and are one of the most specific items available on a menu. Once you deviate from the standard tot, it’s hard to continue to use that description. Such is the case with the HB Burger tots. These were more like flash fried mashed potato puffs than said title. Based on the description, I expected them to be bacony and spicy and although, they were neither. Took a heavy dose of ketchup to moisten these salty little numbers up.

After a few tots made the adventure down my throat, a new burger arrived, this time exactly as as ordered. I was SO hungry that I had to remind myself to go slow before devouring this in one shark attack like bite. First bite; nice bun, very juicy patty, nice flavor in the beef and good sautéed onions. I bit back for a 2nd bite, really focused on tasting every intricate flavor. The beef had a juiciness unique to this burger. The beef itself had more of a grass fed flavor which was really complimented by the salty cheddar cheese.

The bottom of the bun had no chances of survival in fighting the juiciness of the burger. I had serious trouble getting my standard “left hand grab” photos without the burger oozing out everywhere. The flavor was so good that I considered a 2nd burger and not because I was hungry, but more so because I wanted more time to savor the flavor. It will have to wait for next time and there will definitely be a next time! 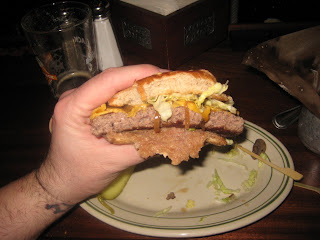 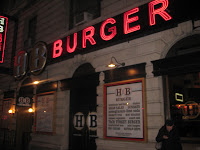 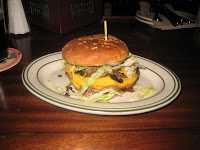 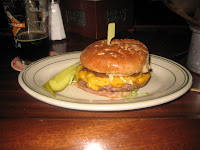 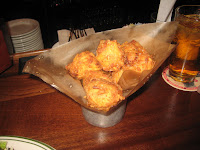 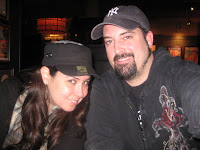 THE BEVERAGES
As a beer advocate and blogger (see One Barrel Bar site) I thought you might appreciate hearing about the brews I tried.

Bavarian Black Lager
This is known as a “Schwarzbier” which in a direct translation from German means “Black beer.” At 6.50 ABV, this mild, porter-like brew had a nutty flavor with a hint of caramel. It’s not too strong and not too thick, which is actually what I would prefer. However, for a restaurant serving the Times Square crowd, playing it safe and mild is the smart way to go.

Old Red Nose Ale
This dark red / mahogany has a 5.75% ABV and has a hint of spiciness that one would expect from a winter brew. It has a strong flavor and a long finish. Probably one of my favorite of Heartland’s offerings but it’s only available in November and December.

Spicy Ginger Ale
Heartland, along with their beer, offer up home made sodas. The wife, not really a fan of beer, decided to try to Spicy Ginger Ale. While she mixed it with a shot of Crown Royal for a little holiday afternoon cheer its overt spicy ginger appeal makes it good on it’s own. The soda is closer in flavor to a ginger beer than regular old ginger ale and I bet it would be amazing heated up on a cold winter’s day. 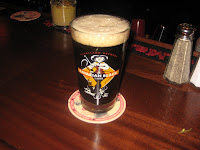 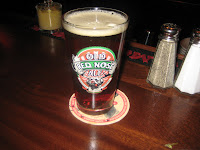 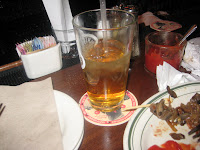