THE STORY
Every year at the holidays I return home to my native land of Michigan to visit family and friends. This year I reached out my best bud The Logg and asked him to pick out a burger for us to eat. After MUCH research (watching an episode of Diners, Drive-Ins and Dives,) Logg suggested we head to Joe’s Gizzard City. Located in Pottervile, MI, a town so proud of their fried chicken stomachs, they have an annual Gizzard Fest.

For those of you not from the Midwest, South, Eastern Europe or Asia, you’re probably wondering “what the hell is a freakin’ gizzard?” To answer your queries, it’s a 2nd stomach, used for grinding that can be found in birds, reptiles, earthworms and some fish. The more veterinarian types refer to this organ as a ventriculus, gastric mill, or a gigerium. Too medical? Let me get all layman’s on you…it’s the chicken’s guts.

Open since 1960, Joe’s has been passed down through the generations of the Bristol family. Like many mid-Michigan eateries, Joe’s is a bar menu type of restaurant but with a twist. Nearly everything on the bar menu is offered as a fried option. Hot dogs, hamburgers, meatballs, chicken, fish, shrimp, cheese, corn, potatoes, tacos, olives and even Twinkies, Oreo s and cookie dough are all server battered and fried. Joe’s is not for the weak of heart or stomach!! I wouldn’t be surprised if they accidentally deep fried the dart board, tables and an accidental local every now and then. Guy Fieri from the aforementioned show even created his own burger here, “The Triple D.” It’s a 1/3rd pound cheeseburger with pickles, onions and a slice of tomato deep fried in the house batter mix.

We of course started off with the gizzard sampler (regular, herb/garlic and cajun style). Why the sampler? If you’re gonna get wet, don’t just dip your tootsies. Joe’s pressure cooks their gizzards in wine to tenderize them. Then they are beer battered, deep fried, spiced and served with a marinara / cocktail type size. Hesitant to eat a chicken’s 2nd stomach, used for grinding and storage, regardless of the deep frying, there was too much pressure on me. I grabbed one, dunked it in the sauce and took a small bite. It was like a REALLY chewy chicken nugget. Although I would like to tell you that I didn’t really like them but I did eat 4 more! We had been drinking at that point for 7 hours, so you probably deep fried a sneaker and I would’ve eaten it. Special thanks to the mason jar of Coors Lite that helped me wash it down.

Following our gizzards were the mozzarella sticks. They were good but oddly enough, I thought they could’ve been fried a little longer. Up next we dug into the deep fried corn nuggets. To make these things they take what is essentially creamed corn, batter them and then deep fry. I’ve had them in the past served covered in powdered sugar but Joe’s serves them with a side of ranch dressing. I’m assuming Joe’s buys them pre-made but regardless fresh or frozen, these are sweet and savory, bite sized treats.

Along with the burger, I also ordered the deep fried meatballs. I have never seen these on a menu before and the curiosity was up. You will never believe this but they tasted exactly like deep fried meatballs! Thankfully Joe’s makes a rich and flavor filled batter which really makes their fried items stand out. The meat balls were good but the overwhelming taste was most certainly the fried outer covering.

THE BURGER
While Tim and the Logg went for the Guy Fieri inspired “Triple D” burger, I decided to take it down a notch with the “Joe’s Batter Burger.” Whereas with the “Triple D” the entire sandwich is battered and fried, the Batter burger only has a fried patty. Everything is else is dressed as a normal burger sandwich. Something about deep fried lettuce just didn’t sit right with me. The “Triple D” is served with a steak knife jutting out of it as if it had been hunted and killed. The intent is for you to cut the massive behemoth into 2 pieces. After slicing it in half, I snapped a picture of Tim’s burger. In all of my burger pursuits, this was certainly one of the most unique.

I wrapped my claws around my own battered burger and chomped down. The toasted bun added an additional crunch to the sandwich and held up well throughout the devouring. The mixes of cheese and the crunchy bacon added provided a nice salty accent. As for the patty, it took a couple of bites for me to fully process. The taste of the rich beer batter with salt and pepper undertones wrapped around the fresh beef was unlike anything I have eaten in recent memory. The deep frying process cooks the burger to a medium well, which is way more cooked than I prefer but I have to imagine its pretty hard to cook it any other way.

I wouldn’t suggest eating a deep fried burger every time your burger jones kick in but if you want an off the beaten path, unique burger experience, Joe’s fits the gizzard. 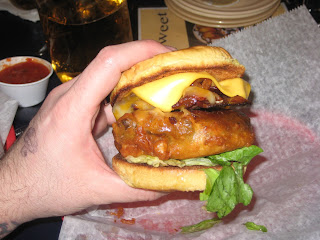 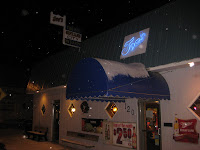 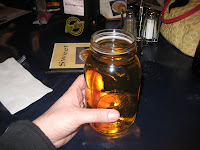 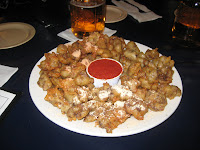 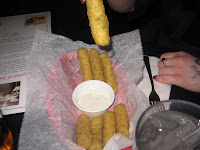 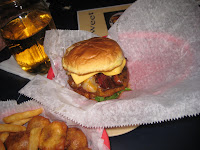 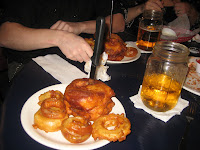 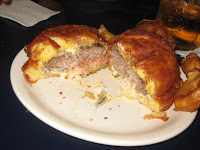 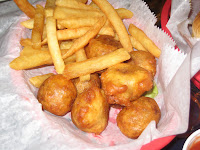 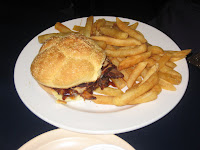 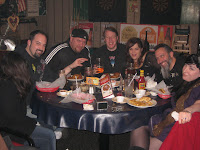