THE STORY
How does that old saying go? “If at first you don’t succeed, fry, fry again.” Or am I thinking of “5th time is a charm”? Either or, in this instance, they are both true! After 4 failed attempts to visit Louis Lunch , the birthplace of the hamburger, I finally scored a beef touchdown!! But I digress…On a street in downtown New Haven, CT you will find a tiny little building that lays claim to serving the world’s first hamburger. In the year 1900, legend has it, a man ran into a small luncheonette and requested a quick meal that could be eaten on the go. The owner of the establishment, Louis Lassen broiled up some ground beef, placed it between 2 pieces of toast and sent the customer on his way. More than a century later, Ken, Louis’ grandson is still serving burgers the exact same way; freshly ground beef, cooked in the same cast iron vertical broilers and served on white toast. You have your choice of onion, tomato or cheese spread as toppings. If you are even considering asking for, or even worse, sneaking in ketchup, shame on you. Not only is it not allowed, you will be removed from the restaurant. Louis also serves home made potato salad, tuna sandwich, homemade pie, bagged potato chips and your choice of Snapple or delicious Foxon Park Natural Sodas and that’s it! Believe me, you don’t need anything else!I’ve been wanting to go here ever since I first heard of the place and when Wing-Off member Dan emailed out to a bunch of us suggesting a holiday season road trip to try Wilson’s BBQ in Fairfield, CT, I finally saw my opportunity. Wilson’s is only about 30 minutes from Louis so I suggested a double gut busting lunch adventure into the lands of Connecticut. Chuck and Kyle jumped at the chance to join us. Shortly into the ride, Chuck, in tribute to the popular film “The Hangover,” dubbed this adventure “The Lunchover.”

THE BURGER
After a quick 2 hour ride up route 95, we arrived excited and hungry for burgers. My heart was pounding with excitement and a slight amount of fear. With so many failed attempts, was I going to be denied Louis’ legendary beefy goodness yet again? Did I check the website correctly? Oh Meat Gods, please don’t deny me. I reached for the handle on the large wooden door and with a slight tug…it came open!!!! I almost started chanting “HERCULES HERCULES HERCULES!” out of sheer excitement.

The tiny little wooden restaurant that was almost 3 times as old as me was packed to the gills. Not a single one of the large wooden seats was open. But no matter, we lined up and placed our orders. I had the urge to order 10 burgers in fear that I may never get the chance again but with the impending gut busting BBQ to follow, I kept it simple: 1 burger, medium-rare with cheese and onion and a diet birch beer. A few moments later a group of people, finishing up their burgers, got up from the large wooden table in the corner leaving 4 open spots. PERFECT! We took our seats and waited. While sipping Foxon’s and making inside jokes, I heard someone say “are you the Reverend?” It pays to blog about your burgers my friends. After a brief chat with the staff, Chuck and I bought some Louis apparel and ran back out to the dining room moments later when our names were called.

Here it was, the magic moment. 165 blog posts later, I was about to eat Rosetta stone of hamburgers. Was I ready? Was it going to be a good as I imagined? What if I had hyped it up too much to myself? What if I spent one too many hours salivating over the idea? After a deep breath, I took my first bite…wow. Wow! WOW!! This was a serious burger for serious burger lovers.

The big juicy patty melted in my mouth. It was cooked perfectly and filled with delicious fresh beef flavor. The upright cooking method allows what little fat is in the meat to cook off, leaving just the natural cooked beef taste to swirl around and dance on your taste buds. Condiments be damned, the subtly of the onion and light amount of cheese spread really brought out the true tastes of this beef legend. I’m normally a proponent of specialty buns for burgers but who am I to argue with tradition? Especially when it’s more than obvious, this isn’t about the bread! It’s about the fresh ground beef and a tradition that is almost 110 years old!

Get yourself to Connecticut and eat this burger. Then count your lucky stars to be a part of one of the most important food items in the history of our great country. But be sure to check their website first and make sure they will be open when you arrive!!! 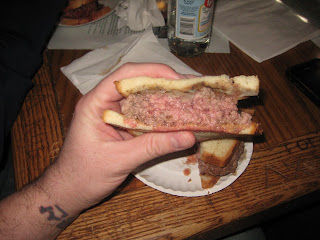 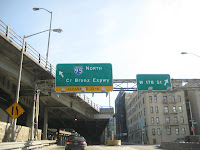 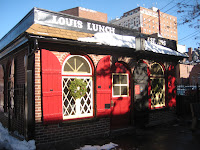 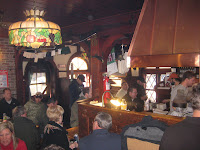 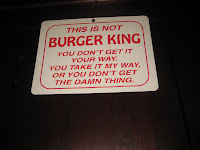 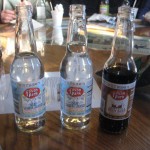 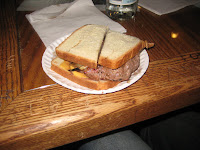 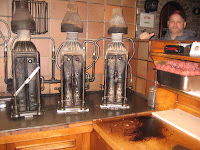 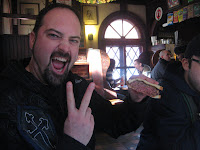 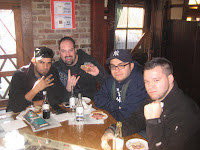 With happy burger bellies we set the GPS for Fairfield, CT. The visions of pulled pork, ribs and delicious brisket danced in our thoughts as we anxiously made our way to Wilson’s BBQ. Granted it was a Tuesday, but we were a little surprised to find the parking lot so empty but not as surprised to find out Wilson’s is only open Thursday through Sunday…BBQ FAIL!! What is it with Connecticut and odd days and hours with restaurants!?!? I just can’t win here. Shame on us however for not following my own advice above.

Refusing to be beaten, Chuck demanded we re-route to the Mohegan Sun Casino for some drinking and gambling. The genius of Chuck’s suggestion is not however based in those 2 activities for located at Mohegan Sun is Big Bubba’s BBQ. We would not be denied our smoked meats and The Lunchover conitnues!! I re-routed the GPS and as we made our way back to the highway, we passed a sign that called out our name; Super Duper Weenie. Dan pulled a U-bender into the parking lot and we made our way in.

As a native Detroiter, I grew up eating coney dogs at Lafayette Coney Island and although I will defend them as the BEST coney, I don’t love hot dogs. Hot dogs for me are only eaten in 2 instances; baseball games and to soak up booze. For this occasion, I was more than willing to make an exception. Super Duper Weenie originally started only as a food truck but in 1999, the owners opened up this roadside location to serve up a local favorite. Their locally made wieners and bread are offered up with a wide array of toppings including onions, bacon, sauerkraut, chili, cheese, relish and more. Although they do server burgers, I thought it better menu item of name.

I ordered a “Cincinnatian.” A hot dog topped with “Cincinnati Style Chili, Cheddar Cheese & Chopped Onions,” which is about as close to a Detroit style coney dog as you can get. While I waited for my weenie I sipped on some delicious Boylan’s vintage soda pop. I won’t lie to you, this is one of the best tasting hot dogs I have ever had. The bun was soft and fresh with just a hint of sweetness. The beef and pork dog had had a slightly crunch casing and was just a little on the smoky side. Both the cheese and onions were fresh and good but the real delight was the chili. In Detroit we absolutely smother our dogs with chili but such is not the case at Super Duper Weenie. They carefully spoon out just enough to add a distinct flavor to their offering but not over power the taste of the delicious pork and beef hot dog itself. This is a real winner and in fact so good, that even though Chuck offered me a bite of his onion and bacon covered dog, I refused not wanting any other taste in mouth. 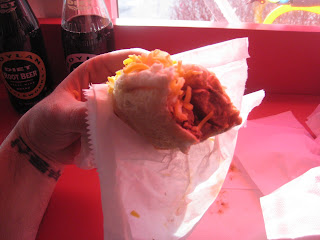 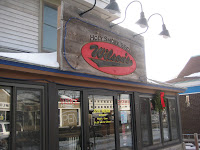 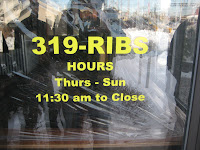 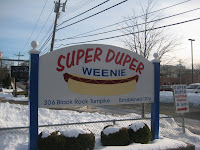 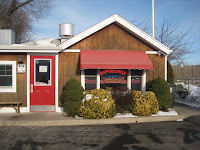 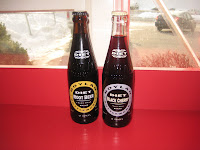 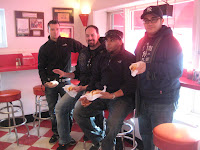 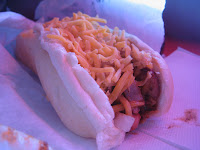 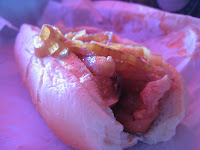 THE BBQ
We hopped back in the car and headed off to Uncasville, CT. After an hour drive and quick change of shirts, we were at the Black Jack table cheering on the Ace of Spades. Once our gambling fix had been satiated we moved on to satiating our stomachs at Big Bubba’s BBQ. A sister restaurant to NYC’s Virgil’s BBQ, Big Bubba’s serves up all things ‘que but is best know for their “Fall Off The Porch Ice Tea,” (a Long Island with Peach Schnapps added) and their famous ribs. We started with a sharing plate of trash ribs which lasted about 30 seconds before being completely devoured by 4 carnivorous meat fiends. I went with the 2 meat combo of baby back ribs and sliced brisket with a side of dirty rice and mac and cheese. All of it was really good due to Bubba’s delicious and tangy BBQ sauces.

A few more rounds of cards and we piled back into Dan’s car for the long ride home. Chuck and Kyle passed out in the back seat but were abruptly awoken when I spotted a pit BBQ restaurant off exit 42 on route 95 south. Dan, a wise man, kept on driving. It was high time for The Lunchover to be over. 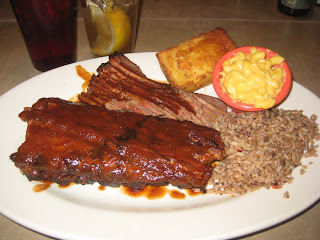 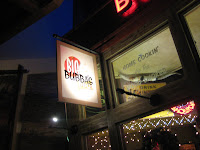 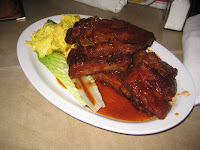 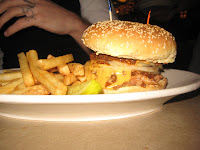 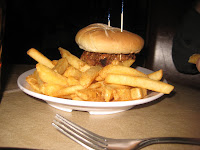 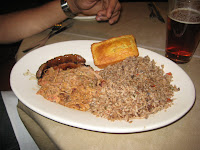