Rub BBQ – Burgercon 3 A Welcome Case of the Mondays

We’ve gathered twice before at an event dubbed “Burgercon.” Burgercon 1 took place at the Shake Shack. Burgercon 2 went down at the Trailer Park. To ring in the holidays, you know, ‘Tis the seasoning, I suggested a 3rd “meating” of the burger minds. When Motz said we should gather at Rub BBQ for the secret menu “Monday Night Burger” there was a resounding flurry of reply alls with “I’m in!” 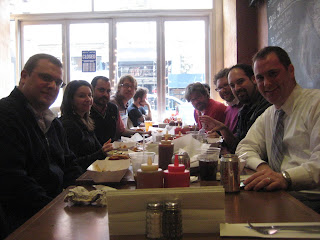 Rub BBQ, more formally known as “Righteous Urban Barbecue,” was started in 2005 by Andrew Fischel, a student and partner with award winning BBQ master Paul Kirk. Located in NYC’s Chelsea neighborhood, this restaurant serves all kinds of BBQ specialties and comfort foods. From ribs to pulled pork to chicken to brisket to sausage to chicken wings to chili and even duck.

Rub’s specialty are their burnt ends. A Kansas City delicacy, burnt ends are literally cut from the end of a piece of brisket and are put back into the smoker for further cooking. Be warned, Rub only has a certain amount of each item on the menu available every day. When they run out, you are S.O.L. Be sure to check out the chalk board when you walk in to see what is no longer available that day. I’ve definitely had my share of let downs on past visits. Somebody cue the Rolling Stones…

Once we were all sat, Andrew and crew wasted no time piling up the table with tasty BBQ’d treats. Up first, BBQ Chili Cheese Fries! This pile of happiness is made from thick in house-cut fries, topped with “competition” chili and smothered with gooey cheddar cheese. The flavor is so overwhelming and rich, you’ll have problems saving your appetite for anything else. Practice extreme caution as they are addictive!

Up next, a special request made by me, smoked turkey! Say what you will about brisket, ribs, link, pork, etc…smoked turkey is my fave BBQ meat on the menu. It’s naturally mild flavor really takes in the flavors of the smoke and allows you to taste the cooking methods and the sauces. Don’t get me wrong, I will club someone with a sawed off hockey stick, Detroit-style, for some pulled pork, but this guy loves smoked turkey. Nearly every time I’ve been to Rub they have run out of it and there was no way I was missing out this time. Shortly after it arrived on the table, they ran out. I don’t have any clue as to how Rub smokes their meats but the turkey just melts in your mouth and the hickory smoked flavor is not to be missed.

Although no one asked for it, Andrew showed up with a couple massive plates of Frito Pie. I could tell he was proud of it like a father watching his son win the Heisman. For those unfamiliar, Frito Pie is chili, cheese and jalapenos poured over an open bag of Frito’s corn chips. To be done properly, one must tear open a bag of Frito’s, top with the mixture and serve on the bag. Although essentially the same as the chili cheese fries, the corn chips turn this southern version of nachos into a whole new sensation. The smoky and peppery chili mixed with the tang and heat of jalapenos with the richness of the melted cheddar all come together a top the sweet and salty corn taste of the Frito’s.

It was Adam and Jason from BOTM’s first visit to Rub and the allure of “BBQ Bacon Chunks” was too much for them to say no. Rub takes thick cut, house cured, nitrate free Bershie black pork belly bacon and triple smokes it, serving them cut up into bite size pieces. I applaud their choice of placing an order. If you like bacon, you will love these things. Each piece is an extremely salty burst of bacony pleasure.

Nearing stomach capacity, we all had to remember why we were here, BURGERS! But not before Andrew placed a basket of BBQ Chicken Wings. We had practically eaten enough for a whole meal already!

THE BURGER
Then the moment arrived! I was finally face to face with the secret blend of in-house ground beef, cooked smashed style, with grilled onions, small pickle slices, a slice of Velveeta cheese and the chipotle based special sauce burger served on a buttered and grilled bun, known as the Monday Night Rub Burger. While the desire to slam it into our faces was certainly prevalent, each of us took the time to photograph the beauty in front of us. Such is the case when dining with bloggers, a concept my Grandma may never understand.

After removing the pickles (I can’t stand them) with all the control of a well trained ninja, I took a very small sized bite. The flavors exploded in my mouth like fourth of July firecrackers. The patty is cooked at an insane 600 degrees which blackens the outside and stays a perfect medium-rare in the middle. Essentially this creates 2 different amazing flavors for the burger. The crispy crunch of burnt meat and the juiciness of high quality beef. The the sauce was subtle yet added a unique smoky and sweet taste to the sandwich. The juice that poured out of the burger was so flavor filled that I sopped it back up with the bun. It was pure divinity and the choice of Velveeta rather than American, was pure genius. 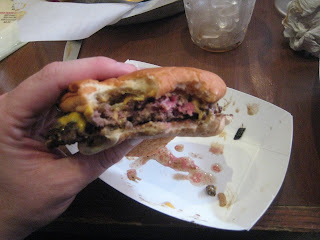 We all sat for a moment, basking in the burger after glow. Taking the moment to enjoy just how delicious and wonderful the burger was that we had just consumed. The doors to Rub flew open. Arriving late, Josh Ozersky, came in and without missing a beat or even taking a seat exclaimed “oh man! Burgers” and dove right into one. Motz had to leave us which was very sad as Andrew came out and asked “you guys want some more burgers?” While I don’t think anyone really had room left in their stomachs, nobody turned down the offer.

A few moments later, Andrew came back with several trays of “onion burgers.” Onions are sliced and placed on the hot grill and a patty smashed on top of it. The onions caramelized and cook into the burger itself. Again, the patty is cooked so quickly that the outside turns crunchy and the inside stays nice and moist. The burgers had a massive pool of juices right on top of them as if to say “c’mere Rev. Put on your burger floaties and dive right in. It’s nice and warm in here and you’re going to be very happy.” This was my first ever onion burger and it was, to quote Bill and Ted “most excellent!” 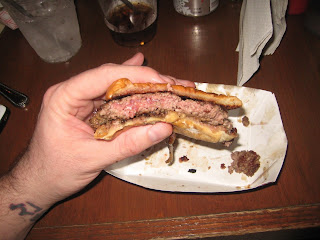 A great time was had by all and I am proud to say the Rub BBQ Monday Night Secret Burger is one of the best burgers I have ever had. Congrats on making it into the Burger Conquest “TOP 5 IN NYC!” Stop by on a Monday night and try it for yourself, I might see you there…EVERY MONDAY! 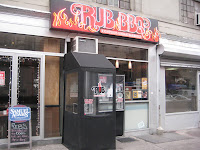 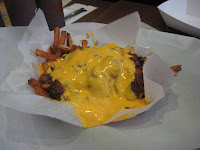 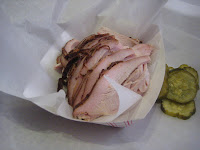 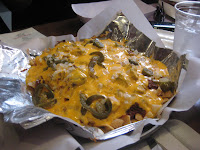 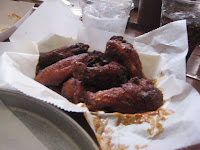 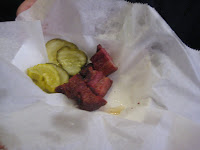 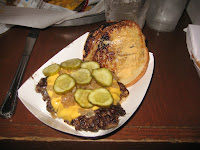 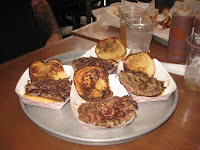 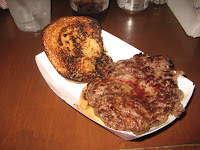