Grill ‘Em All Truck – Patty In The Parking Lot

THE CONQUEST
Outside of my wife and family, my life is about 2 things; music and food. When the 2 come together, it’s a magical moment. It’s the reason why I like taking bands out for burgers. As I was planning my trip out to LA to see the Cancer Bats play the Henry Fonda Theater, Scott from the band (who took me out for the venison burger that changed my life) hit me up and asked “Have you heard of the Grill ‘Em All Truck?” Little did Scott know that I was already talking to Matt and Ryan from Grill ‘Em All about throwing a little burger shindig!

Let’s jump in the Delorean and go back a couple of months. A friend emails me a link to a story on Grub Street about a new burger truck in LA that serves heavy metal themed burgers. Moments later I am composing an email to Matt Chernus and Ryan Harkins, the 2 men behind the Grill ‘Em All Truck (the name is a pun on a Metallica album called “Kill ‘Em All”.) They write me back and I am absolutely flattered to hear they are fans of the Burger Conquest site. We knew we had to do something together and it was just a matter of time.

Matt and Ryan, having played in bands with each other both decided to hell with past career moves and wanted to bring together their 2 biggest passions, food and heavy metal. Thus was born the Grill ‘Em All Truck. You can find the truck roaming around LA serving up gourmet burgers named after heavy metal bands. Try the burger named after Polish black metallers “Behemoth“; “grilled cheese buns, smoked cheddar, apple wood smoked bacon, beer soaked onions.” Veggies fear not, you can order the burger dedicated to the British vegetarian thrash metal band “Carcass”; “veggie pattie, guacamole, pico de gallo, frizzled onions.” Be sure to get an order of the “H100s” to go along with your burger. They are tater tots served with a 3 cheese, roasted garlic dipping sauce.

The truck is always on the go but you can find them but checking their upcoming locations on their website and twitter. You can also book them to cater your private events and parties. If you’re Burger Conquest and the Cancer Bats, you design your burger and invite your fans to enjoy the burger with you after your show. Available with a beef or veggie patty, the “Cancer Bats” burger comes topped with a pineapple, “Grandma’s” BBQ sauce, bacon and cheddar. If you’re the Rev, trying just one of these burgers was not going to be enough.

THE BURGER
The “Cancer Bats” burger was really good. The mix of smoky BBQ sauce, tangy cheddar, salty bacon and and juicy beef created a food mosh pit between a soft white bun. From the look on people’s faces, they agreed!

While I love a crucial food hang with the dudes in the Bats, I have to admit, I was all about sucking down a “Molly Hatchet” burger; “seared fennel smoked sausage gravy, apple wood smoked bacon, maple drizzle.” Words can not describe the anticipation and excitement that was welling up inside me to try this glorious concoction. There is a reason why chocolate covered pretzels are so popular, the tantalizing mix of sweet and salty. It’s the secret that drives people wild about peanut butter. As a trained chef, Ryan knows this and it was with this knowledge that he created the “Molly Hatchet.” The flavors just exploded as I bit into it, overwhelming my taste bands and brain. It was that same euphoric feeling you get when you’re at an Iron Maiden concert and they rip into “Number of the Beast.” While I have never been a huge fan of the band Molly Hatchet, this burger was so frikkin’ awesome, it made me want to celebrate their entire catalog!

“Can’t think of a better way to top a fantastic night……first my band Cancer Bats played one of our best shows ever in LA, had a ton of fun, kids went crazy in huge circle pits and we all had huge smiles on our faces after….only to turn into an amazing heavy metal parking lot rager complete with a heavy metal burger truck! As if this couldn’t get any better, the Grill ’em All Truck made an honorary Cancer Bats burger!

With cheddar cheese, bacon, grilled pineapple and BBQ sauce this was easily the best burger I’ve ever tasted coming from a food truck! The pineapple complimented this delicious banquet burger so well every time myself or a friend would take a bite it would be followed by a chorusing “this is SOOO GOOD!”. Simply delicious and so big the Rev had to finish for me! Also some of the best french fries I’ve tried in LA and the cheese filled tater tots seriously blew my mind! If you’re in LA you must find the burger truck and order a Cancer Bats burger!”
9 out of 10 ounces
-Scott Middleton, Cancer Bats

Between meeting Matt and Ryan, watching one of my bands eat a burger named after them and trying one of the most unique burger creations on the planet, I have to say; I think the Grill ‘Em All Truck could be a shoe in for my top 12 in 2010! 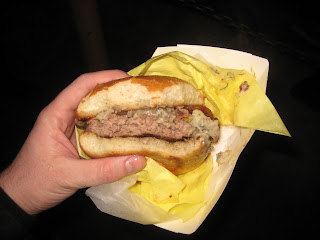 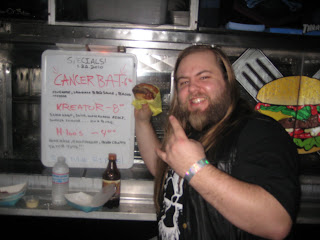 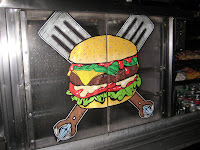 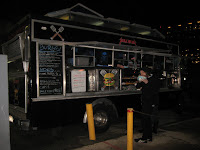 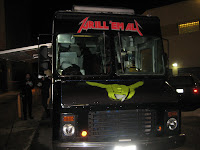 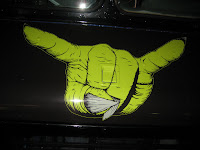 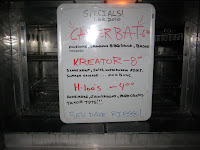 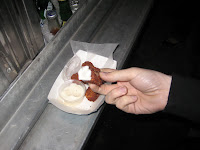 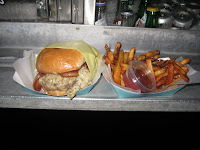 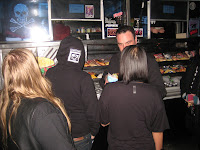 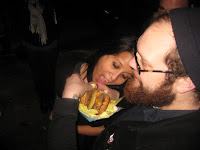 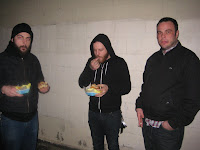 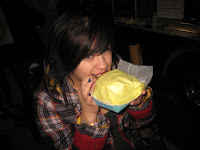 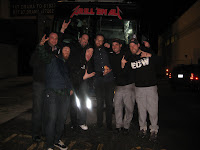 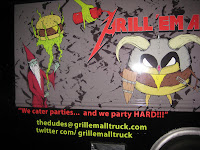 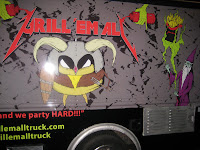 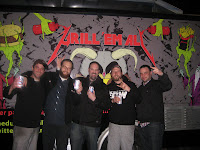