Dirty Martin’s – A Classic Break For the SXSW Inclined

THE CONQUEST
11 years ago, I stepped onto the streets of Austin, TX for the very first time. I was there for the annual South By Southwest (SXSW) Music conference and festival. Back then, I was young(er), (more) innocent, un-inked, had never been introduced to the concept of brisket and the closest thing I had to a blog was an email address. On that trip I tasted my first Texas Market Style BBQ, drank my first Shiner Bock and got my first tattoo. I also watched a shit-ton of great rock and roll bands. Yes, I know, I’ve come along way. 11 years later and I still go to SXSW every year. It’s a great place for the entertainment business to gather, see emerging acts, make new contacts and have a nice BBQ & beer filled spring break.

With so many great choices for BBQ and Mexican food, Hamburgers almost seem like an after thought for visitors to Austin. But after many years of delicious smoked meats and tortilla filled delights, it was time to branch out. Last year we gave Casino El Camino a run for the money and for as much as people love it, left unsatisfied. Enter SXSW 2010. Since last year I have discovered the bible of burgers, Hamburger America, written my my now burger buddy – George Motz. Nearly every burger I have eaten featured in the book has been great so when it came time to plan my Austin eating adventure, I wanted to find some gems that weren’t located in the downtown area. Most people attending the conference never venture outside of the main part of downtown where the activity happens. With 10 of these under my belt, I gathered up a bunch of the music industry’s elite and selected a burger spot near the University of Texas campus called Dirty Martin’s Place.

Though originally named “Martin’s Kum-Back” when it opened in 1926, it earned the nickname “dirty” due to the dirt floors. In 1951 a concrete floor was added but the name stuck. Prior to that point, most of their business was done via car-hop, a lost forgotten art of in-car dining now mostly only available at Sonic Drive-Ins. Dirty Martins not only serves up a classic thin patty burger made of fresh, never frozen, ground beef but they also offer up a selection of sandwiches, dogs and sides including my all time favorite burger side car – TATER TOTS! Wash it all down with homemade lemon and lime aids, shakes and malts, or do as we did – several pitchers of the locally made Austin Amber from the Independence Brewery.

THE BURGER
We started off with an order of corn nuggets, which essentially is cream corn that is breaded, fried and served with ranch dressing. It’s a sweet and salty treat that one must try. Warned in advance of the smaller patty size, I ordered a double meat, bacon cheese burger known as the “O.T. Special.” When I saw the magic words “fried egg” on the add-ons menu, I immediately made the request. Want to take it up a notch like my friend Heather? Order the “D.H. Special” – a hamburger served with grilled onions between 2 pieces of cheese toast! The Dirty Martin’s burger is a classic designed real slice of old-school Americana. Before burgers became thick and gourmet, they were served as thin, fast cooked sandwiches cooked on a flat grill. Chains like McDonald’s and White Castle made this concept world famous but at Dirty Martin’s, you get the real, fresh and never frozen, deal. The sesame seed bun held together well the salty slices of cheese, tasty crisp bacon, fried egg and 2 beef patties. It’s the kind of hole-in-the-wall joint that made the burger a quintessentially American favorite.

Also, the tater tots were AWESOME! 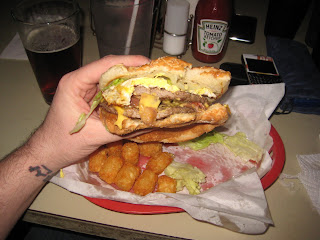 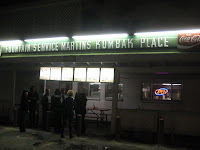 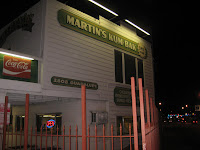 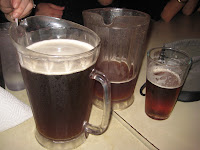 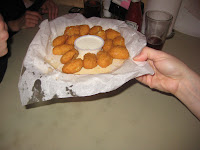 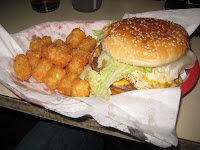 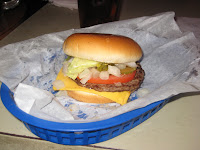 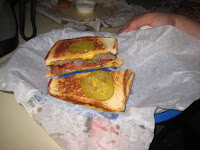 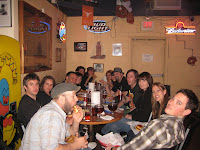