THE CONQUEST
It was a Saturday like any other Saturday. I slept in late, ordered breakfast from the diner and was sitting at my computer updating this website. Then I got a call from Ryan Harkins, one of the 2 owners of the heavy metal themed Grill ‘Em All Truck. “What are you doing this week?” he asked. I responded “the usual, work, meetings, the gym, shows, etc.” “Is there any way you could get to LA?” Ryan asked. “Absolutely not” was my immediate response. They had gotten a call from the producers of the new Travel Channel show “Food Wars” and were asked to battle against another LA burger truck for the title of best burger truck in LA. I couldn’t believe it and neither could Ryan!! The truck is only about 3 months old and to be asked to do something so big was just mind blowing. I congratulated the guys and said I wish I could come out because I know it’s going to be awesome. “No, you don’t understand,” said Ryan “we want you ON the show! You’re our burger expert.” “NO WAY!” was my immediate response. “YES and get this,” he replied “we’re filming in the parking lot of Century Media Records!”

Burgers, metal and TV all coming together? This was it. This was one of those moments where you make a life changing decision. I told Ryan I needed a minute to think about it and I would call him back. I hung up the phone and told my wife. She took one look at me and said “YOU HAVE TO GO!” Within minutes I had flights, hotel and rental car booked. I called back Ryan and told him “Bro, I will see you on Wednesday. I just booked all my travel.” “NO WAY!” exclaimed Ryan, “I can’t believe you are going to fly all the way to LA just to support us.” My answer, “how could I not?”

When it comes to food and restaurants, people can get pretty territorial when defending their favorite. It’s an age old argument, found around the world as to who is the best. Be it Hot Wings in Buffalo, Italian Beef in Chicago, Coney Dogs in Detroit, Pastrami in New York, Market Style BBQ in Lockhart or the Jucy Lucy in Minneapolis, everyone has an opinion. But until now, there has been no driving force, no ultimate power of decision, no documented ranking to cut the mustard, so to speak, and tell the world, who is #1 (if you don’t count my opinion that is). Enter “Food Wars” on the Travel Channel. With host Camille Ford, they are on a mission to end the debates by pitting local faves head to head to see who really makes the best food.

The Grill ‘Em All Molly Hatchet burger is one of the most delicious and unique burgers I have ever had (click for story) so I could not wait to see this battle of the burger truck go down. They were going to be facing Baby’s Bad Ass Burger, a burger truck whose theme was pretty girls. Baby’s was started by an event planner, Lori Barbera and her partner, Erica Cohen a restaurateur. While sex certainly sells, I can’t say that I’ve heard that it makes great gourmet burgers but I was on my way to LA to find out!

GRILL ‘EM ALL SHOOT
I arrived on set Wednesday around 10 am. They guys were already set up and filming in the Century Media parking lot. On this day, the production team was only shooting the Grill ‘Em All Truck. They interviewed the guys, me and a couple of super fans. “Food Wars” host Camille Ford had me tell the story of Burger Conquest, how I met Ryan and Matt and my opinion on their spectacular food. I don’t want to blow it for you, but I was an awesome interview! But you’ll have to watch when the episode airs to see me get Burger Fame on. I will be honest though, I took all the power I could muster to not totally freak out when I got to do a live Burger Conquest on camera. It was awesome.

The production staff for “Food Wars” were a blast to hang out with and made the shoot fun for everyone. Camille was really funny, engaging and as you can see below, definitely not too cool to get down with the burger brethren. The Grill ‘Em All guys served up a full lunch for the production team and the Century Media Records staff. We even had some random people walk up off the street to join in the fun. 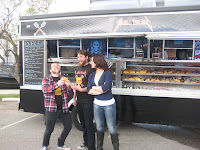 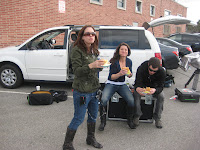 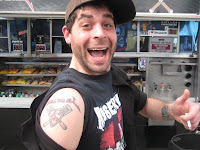 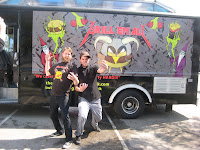 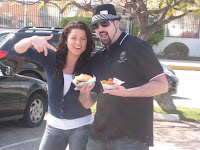 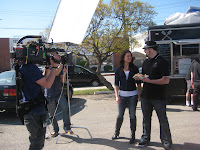 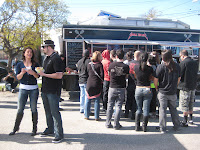 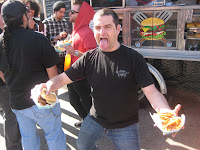 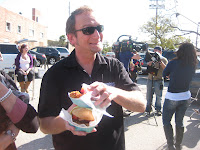 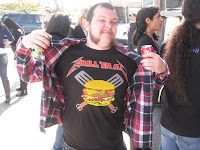 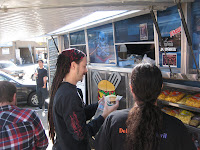 THE BURGER
Once the shoot was over, I was able to try out the latest Grill ‘Em All Creation named after the phenomenally talented Dave Witte – The Witte. Dave is an astounding skinsman (and a hell of a nice guy) who lays down the groove for metal bands Burnt By the Sun, Municipal Waste and more. With a diverse array of talents, this man deserved to be honored with a burger that matches his intensity and skill. One bite of his name sake burger and you will know that Matt and Ryan are big, big fans.

The Witte comes with California cream cheese, deep fried bacon, beer and Sriracha soaked onions and garlic ailoi. It sounds as intimidating as his playing! Once my interview was over, I walked over to the truck and begged to try one but with a swap out for the Pabst soaked onions instead. While Camille interviewed another super fan, I got some shade under a tree and sunk my chompers into this blast beat inspired burger. Grill ‘Em All use high quality, fresh and flavorful ground beef for the patties. They know that no matter how crazy you get topping a burger, the beef has to be good. The deep fried bacon was crunchy and bursting with salty pork goodness. The beer soaked onions were pure topping wizardry and although I wouldn’t have chosen cream cheese to make the magic come together, that is exactly what it did. Best part, they put the cheese on the bottom. The mix of flavors is pure intensity and it will feel like Dave is bashing away at some floor toms right in your mouth! 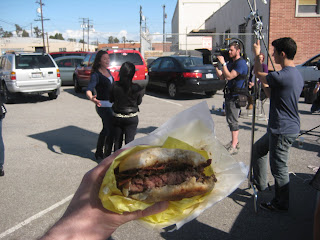 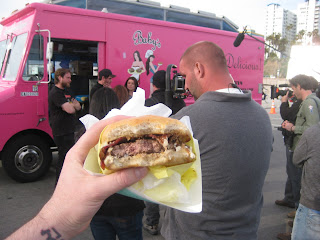 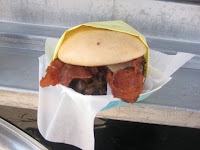 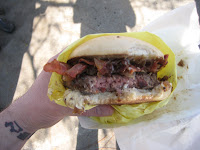 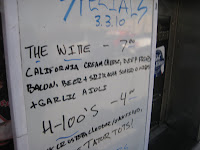 THE BATTLE
Here it was, the Beyond Thunderdome of the LA Burger Trucks.

The “Food Wars” staff chose to have the face off take place at the famous Santa Monica Pier. The two trucks parked up at the edge of the parking lot and the shoot began. Being the generous and caring guys they are, Ryan and Matt fed everyone working on the shoot breakfast. It was the toppings of the Molly Hatchet burger (seared fennel smoked sausage gravy, apple wood smoked bacon & maple drizzle) on top of french fries and eggs. Even with out the burger, it was still amazing. (Note to Grill ‘Em All – I would like a french fry and egg covered Molly Hatchet!!!!!)

As the shoot got rolling, many a bystander showed up to watch the burger battle. The Grill ‘Em All guys and I really promoted the taping on our twitter accounts and it showed. By the time they were ready to film the battle, the parking lot was filled with rabid Grill ‘Em All “Ghouls.” Among them was Rod from the Bootlegger’s Brewery in Fullerton, CA. He
brought one keg of their Old World Hefeweizen and one keg of their “Black Phoenix” Chipotle Coffee Stout. He quickly loaded them onto the trucked, tapped ’em and started serving. We were all enjoying the delicious brews until a life guard had to party poop on us and the kegs had to go away.

The Burger Battle bell had wrung and we were all assembled around 5 tables, 1 for each judge. The panel consisted of 1 super fan for each truck and 3 “celebrity judges.” Each judge is blind folded and handed a burger from each truck. No one is allowed to talk, including the judges, throughout the taste test. Once complete, each judge votes for their favorite. The vote gets tallied and Camille announces which truck is bestowed with the title “best burger truck in LA.”

But for more on that, you’ll just have to tune into the episode!!! Be sure to catch their season premier episode on March 9th at 10 PM EST where they will determine who has the best wings in Buffalo.

After a long day on the shoot, what did Ryan and Matt do? While they could’ve packed up and taken off, instead, they hopped in the truck and opened for business. While everyone cleaned up the set, they served up a full menu for everyone that had arrived and worked on set. Matt and Ryan know which side the bun is buttered on and much like a great metal band, would not let their fans down. Me, I snuck in another Witte! 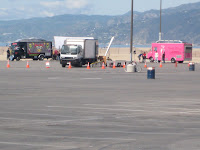 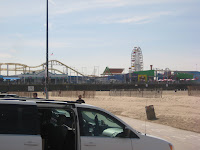 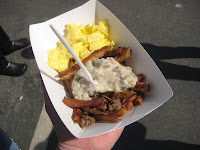 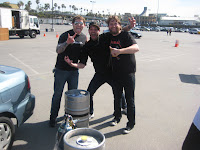 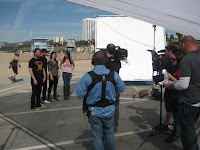 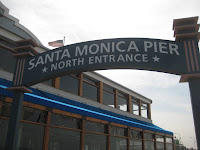 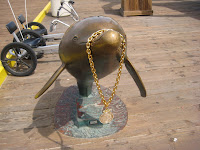 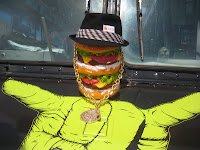 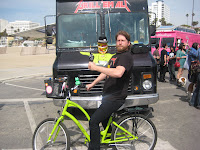 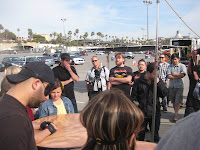 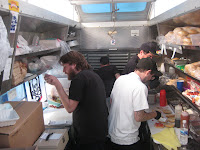 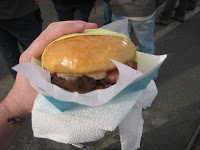 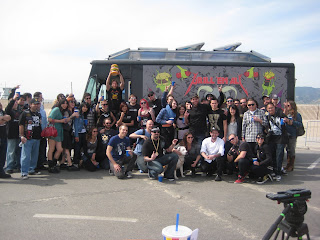 On a real serious tip, I want to thank the “Food Wars” staff, Camille Ford, all the Ghouls, Baby’s Bad Ass Burgers and especially Matt and Ryan from Grill ‘Em All. I am completely honored that you allowed me to be a part of what was your very special day. I had an absolute blast and regardless of the outcome, everyone involved acted like a champ. Matt and Ryan, you guys are the best and I couldn’t be more proud of you for making your dreams come true.