THE CONQUEST
It’s late in the evening on a Wednesday and my phone rings. It’s Matt from the heavy metal themed gourmet burger Grill ‘Em All Truck. Turns out that he and his partner Ryan, along with chef Joel were coming into NYC as they have been involved in a new reality TV show that’s coming to the Food Network. It’s called “The Great Food Truck Race” and it pits several different food trucks in a “Cannonball Run” like battle across the US. As part of the competition, the trucks are not allowed to update any of their websites or social networking profiles as it pertains to the show or their location. However, they can enlist the help of friends and family and thus, the conversation we were having.

Matt wanted to know if I would be willing to use Burger Conquest and my fellow colleagues in the music business to help drum us business and hype for their participation the NYC portion of the competition. As I later told one of the producers “once you have their burger, you will understand why I will do anything for these guys!” So with that, the metal army, the food fanatics and friends were mobilized and ready to eat, tweet and meat.

I won’t get into the specifics of the contest or what happened while they were here. For that, you will have to tune into the show once it airs. (We’ll share that information as soon as we have it.) But I will say thank you to each and every person who came out and ordered a burger, organized a gathering or helped us spread the word. It was 48 of the craziest hours of my life and we had an amazing time driving around NYC and selling delicious gourmet hamburgers.

SPECIAL THANK YOUS
Cara – For showing amazing support while I dropped everything last minute to ride around in a truck, selling burgers with 2 of my goofy friends from LA while being really stressed out. Also, for being shameless enough to parade around Union Square with a “Grill ‘Em All” poster board.
Chuck – For riding along for the entire thing and being a great wing man.
Jason – For showing up 3 different times to eat, scout and help promote.
Kari – For organizing a group of hungry metal heads outside of Whisk, an awesome cooking store in Brooklyn.
Ben, Patrick & Sherwin – For allowing us to park in front of and feed people who were visiting the amazing Brooklyn Brewery.
Maria and Rikki – For helping to spread the word and going on a burger binge to help the greater good of metal heads and burger fans everywhere.
Mike, Rich & JD – For bringing the “Slider” into Staten Island to eat burgers and scout locations.
STEVE & WSOU – For promoting the truck’s area appearance on the amazing WSOU, 89.5 FM.
Kyle, Rob & Marc – For holding a space and allowing the guys to vend in front of NYC’s two coolest new bars; Idle Hands Bar and Billy Hurricanes.
Maggie – For making sure that everyone knew that “Chicks Dig Burgers.”
Robyn from A Hamburger Today, Ross from NYY Stadium Insider & Amy from Austin Daily Press for abusing their twitter accounts to retweet me and help us promote.

THE BURGER
Amongst all the chaos and mayhem, I did get a chance to try a Grill ‘Em All selection that I had yet to try. In the past, I’ve had the Molly Hatchet, The Witte & the Reign In Bun, all of which are DELICIOUS. But on this little adventure I got a chance to sink my chompers into the Behemoth. This burger is named after the polish black metal band of the same name (Behemoth). It’s served with grilled cheese buns, smoked cheddar, apple wood smoked bacon and beer soaked onions. But what made this particular burger different this time was the beef used.

While in NYC, I turned the guys onto the amazing butcher Pat La Frieda. Pat for all intense purposes is a rock star of beef. He gets more press than the US President and he supplies the meat for many of New York’s most popular burgers including Shake Shack, Primehouse, Kenn’s Broome Street Bar, Spotted Pig, Little Owl, Market Table and more. Chef Scott at the very tasty Dos Caminos, was gracious enough to help us get some for the truck. So if you are doing the math, in NYC, we were treated to Grill ‘Em All Burgers like no one has tasted before, this time with Pat La Frieda beef.

Words like “gut-buster,” “amazing,” “tasty,” “unique,” and “special,” barely do the sheer intense insanity of this burger any justice whatsoever. While it sounds like it would be an overload, Chef Ryan from Grill ‘Em All knows just how far to push the boundaries without going over. Kind of like a great Slayer song, if you will. I enjoyed every last juicy, savory, delicious bite of it and only wish I could have another.

While you are waiting for the show to air on the Food Network, get your ass to LA and try these burgers! It will probably a long time until they are back in NYC but until then, you can get an official Grill ‘Em All Truck t-shirt! 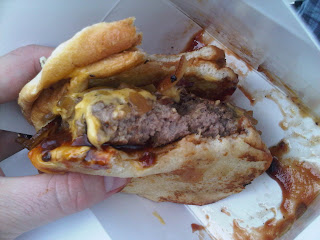 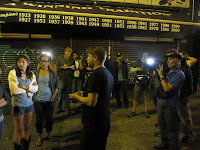 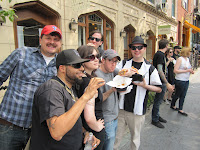 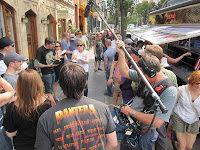 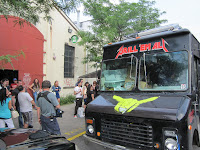 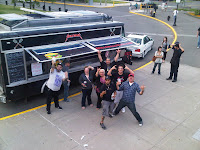 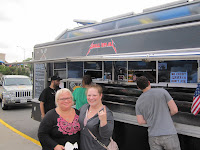 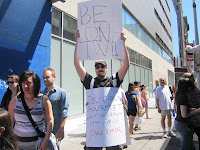 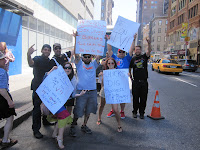 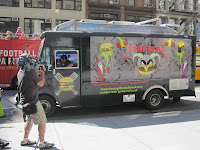