THE CONQUEST
As the cold winds of winter give way to the sunshine of the spring, I hop up on my bicycle and ride like crazy. I call it “revrides” and keep a running tab of miles ridden as well as photos taken while site seeing in the amazing city that is New York, NY. On the weekends me and a couple of my bike riding pals go on little bike adventures around the 5 boroughs and our favorite one is the yearly ride to Coney Island. It’s the home to NYC’s most famous beach as well as freaks, carnival rides, hot dogs and so much more. Dozens and dozens of films like Requiem For A Dream, Cloverfield, Uptown Girls, The Pick-Up Artist, Angel Heart, Remo Williams, Brighton Beach Memoirs, The Wiz and many, many more have all been filmed there.

Coney Island also houses one of the world’s most famous amusement parks, Luna Park. Alongside of this famous park that has just gone through a rebuild, you’ll find the famous Deno’s Wonder Wheel and The Cyclone. The former, built in 1920 was officially declared as a landmark in 1989. 7 years after the birth of the Wonder Wheel, The Cyclone joined it on June 26, 1927 and was declared a landmark in 1988. Both rides have defied the test of time and stand as an amazing piece of not only amusement park history but also that of Brooklyn and New York.

What better to do once you have ridden your bike all the way out to the South end of Brooklyn than refuel. There are lots of food choices in Coney Island but none more famous than Nathan’s. In fact, they’re SO well known that they are actually named Nathan’s Famous. Originally constructed in 1916 by a Polish immigrant using his wife’s hot dog recipe, Nathan’s quickly boomed in popularity. Over the years Nathan’s has been the proud hot dog of choice by Al Capone, President Roosevelt, Barbara Streisand, Rudy Giuliani, Jerry Seinfeld and more. It’s also the home to the International Hot Dog Eating Contest, happening every July 4th.

WHAT DOES THIS HAVE TO DO WITH BURGERS?!???

For those bike inclined and looking for the route, once in Brooklyn, we ride Union East until it lands right into the entrance of Prospect Park at Grand Army Plaza. Its a great park and an even more spectacular entrance. The Plaza serves as a traffic circle where 8 major roads connect. In the plaza itself, sits the Soldiers’ and Sailors’ Memorial Arch, Brooklyn’s version of the Arc de Triomphe. Across from it, on the South side of the plaza, you’ll find the entrance to Prospect Park and on this day in particular, we found something very interesting.

Everyone has FIFA World Cup fever. It only happens every 4 years and consequently the only time Americans really care about the sport. Truth be told, we just want an excuse to drink beer at 7:30 AM EST!!! Nearly every bar in NYC is airing all games and you can see people at any given hour wearing the jersey, hat and or flag of their team. Even CNN and BING are in on the action creating World Cup badges on Foursquare. Everyone has World Cup Fever, even ESPN.

While Nona and I sat in Grand Army Plaza while Bram and Leo ran to the bike shop, we saw what appeared to be a Food Truck with a large TV a top. Upon closer inspection we found it to be the ESPN World Cup Match Truck. The truck was set up by ESPN and parks at a different location each day in NYC, showing the games live on an HD screen and serving up a “menu of authentic street food inspired by the countries playing in the World Cup.” Among the selections I found Sliders “Mini Hamburgers with Kogi Ketchup.” Of course I couldn’t resist, especially since the truck smelled so good and placed an order. A few minutes later, Nona and I were sitting on the park’s wall about to dig in.

THE BURGER
The burgers came out quick and looked pretty good. The buns were glistening and toasted, the cheese was melted and a very distinct smell was coming off the the ketchup and whatever the hell else was on the burger. At first I assumed the mystery topping to be chopped onions but after my first bite, I realized otherwise. It turns out that “Kogi Ketchup” is ketchup made with sriracha hot sauce and kimchee (pickled, spicy bamboo shoots.) It had one hell of a kick that left a slight burning sensation on our lips for a good 1o minutes. The beef was cooked nearly well done, which with a slider is almost inevitable, but was clearly taken for a decent cut. The patties had a really nice beef flavor. The kimchee and sriracha became a little too much and I eventually scraped some of it off. Ahhh! Much better! It was a nice, spicy little world cup oriented treat and I would definitely suggest you try it.

Check their calendar for New York City area appearances.
Follow them on Twitter for updates.
If you live in Los Angeles, they have an ESPN Match Truck as well.

BUT if you REALLY like food and want to try the ESPN Match Truck, I heavily suggest you get a ticket to the NYC Food and Film Festival. Among many fantastic events, on Saturday, June 26th, 2010 the ESPN Match Truck will be featured in The World’s First Food Truck Drive-In Movie. The event runs from Noon until 1o pm in Dumbo, under the Brooklyn Bridge. The entire event is put on by the Master of Burgermonies, George Motz from Hamburger America.

I will be in attendance myself and I look forward to eating and meeting with all of you! Let me know if your attending and be sure to follow me on Twitter and Foursquare. Until then, see you on the bike paths! 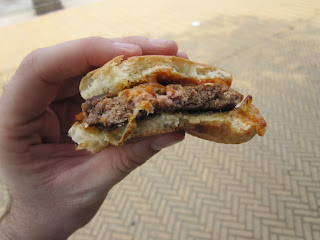 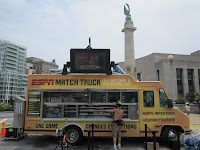 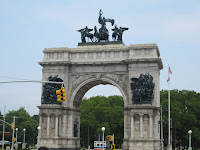 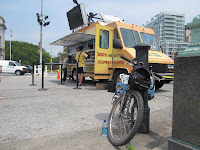 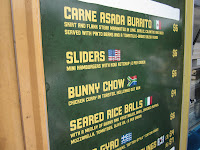 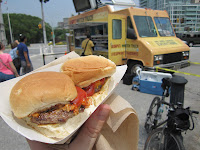 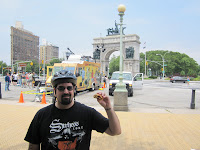 As for the ride, it was a blast. Here are some of the pictures. If you ride out there yourself, be warned, bicycles are NOT allowed in Luna Park and the securities guards working the guide are rude, unhelpful and lazy. Expect nothing more. After 2 extremely frustrating attempts to check out the new park, we threw our hands up and walked out. Thank goodness for the delicious Hot Dog and Cheese Fries (a must!) at Nathan’s! 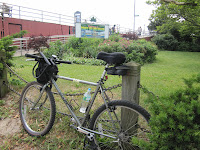 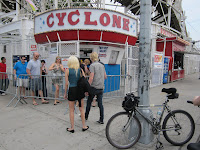 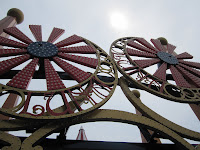 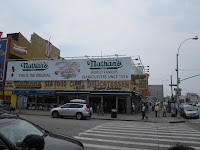 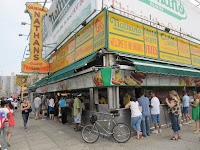 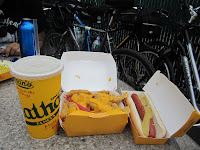 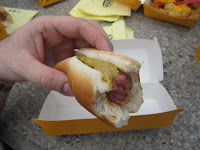 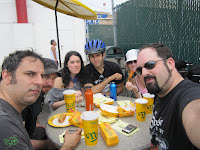 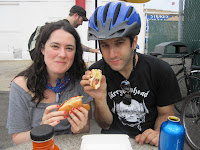 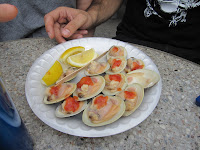