Pop Burger / Pop Everything! – Get Your Burger Fame On

THE CONQUEST
It’s Internet Week 2010 here in the Big Apple and the streets are filled with bloggers, techies, designers and Foursqaure Ninjas. Events are being held all over the city by an assortment of companies, sponsors and hosts. There is also an Internet Week HQ located at the Metropolitan Pavilion where you can find a full exposition with displays, events, booths and meetings. To be honest, as I scrolled through the conference and event lists, I got lost. None of it really spoke to me although there is a Food Blogger workshop happening today. Registration rang in at a steep $150 and I opted to update Burger Conquest instead of paying people to spend 8 hours being told ” be interesting.”

However, there was one event I was surely not going to miss; Pop Everything!
**
Join BUZZMEDIA and Ustream for POP Everything, a pop-up party at Pop Burger midtown, featuring complimentary cocktails and hors d’ouevres, and the opportunity to go head-to-head in pop culture trivia against BUZZMEDIA personalities including The Fug Girls, JustJared, and The Superficial. Celebrate Internet Week NY with a DJ set from Ratatat, plus refreshments from Pop Burger.
**

Free burgers, web geeks and The Real Housewives of New Jersey? I’m there! You know when the Rev shows up at a burger event, it becomes officially endorsed as Burger-Awesome! With my Burger Bling swinging from my neck, I entered the party and was instantly greeted with mini-burgers and beer…truly a “King’s” welcome.

The fine folks at Buzzmedia held a pop trivia contest that was broad casted live on the web via Ustream. I chose not to make a total ass out of myself for not knowing the first thing about 90210, and instead set off to burger mingle. Additionally I knew there was no besting the Pop knowledge master known as my wife Cara. I knew better to best be stepping aside.

I met all kinds of great folks and had an amazing time. There was one person in particular who I was excited to meet above all others, Ryan from Blue Fountain Media. He is a web designed and the Foursquare Ninja behind http://foursquarebadg.es/If you’re on Foursquare you know what badges are and how crazy obsessed people can become trying to unlock them. Ryan’s site is an up to the minute guide on how to find and unlock the badges. As one of the badge obsessed freaks, I started tweeting at Ryan asking for help in finding unlocking clues. Soon we were engaged in conversation about Gossip Girls, Douchebags and Al Roker. (If this all sounds like gobbleygook to you, click here to learn more. Turns out Ryan is also a foodie and big burger fan, but then again, who doesn’t like a burger!?!? He’s the one in the red flannel in the pictures below.

Are you on Foursquare!? Let’s be Ninjas.

THE BURGER
As for the burger, it was good and no different than the normal burger served at Pop Burger. You can read my full review here. I will say that I was impressed with Pop Burger’s ability to still serve up quality food in mass to a large, hungry crowd. Most restaurants buckle in that situation or the quality and care takes a drop. Kudos. The cheese wrapped mini-hot dog was good too but honestly a hot dog is a hot dog is a hot dog. I would not go as far to call myself a connoisseur of the wiener (that’s what she said) but this was not bad at all. I also thoroughly enjoyed the vanilla cupcake with extra frosting in the center and sprinkles on top! 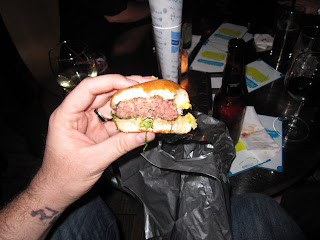 Congrats to all the people I met that made it to the blog, now YOU’RE BURGER FAMOUS!! 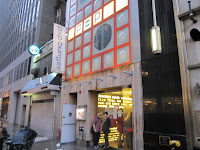 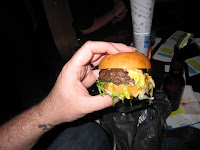 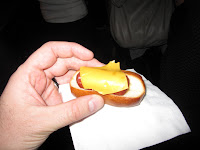 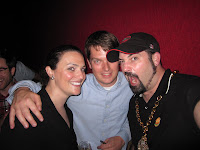 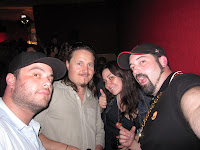 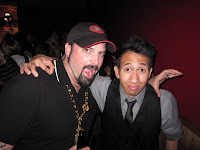 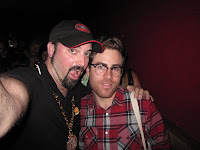 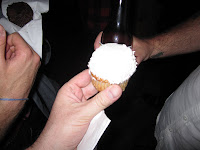 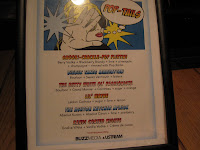 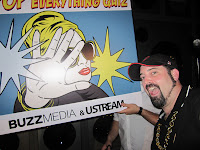