Posted on 06/18/2010 by Rev
Schnipper’s Quality Kitchen
http://www.schnippers.com
620 8th Ave
New York, NY 10018
THE CONQUEST
You know who likes burgers? EVERYONE! And if they say they don’t, either they’re lying or they’ve never had one. However this time, I am asking about a specific group of people. Answer? The New Kids On The Block! Or even more specifically, the man on their wheels of steel; DJ Cheapshot.

When I got an email from him that simply read “Are you free to show me NYC’s best burger or at least meet for a sec? Would love to meet the myth!” I thought how could I possibly deny the request? I might be a myth but the New Kids are legendary. Say what you want, being successful at an early age and staying successful for many decades is practically an anomaly these days.

So kudos to them and especially to any who loves burgers as much as DJ Cheapshot. I’m guessing most of you know him from being the New Kids On the Block DJ or maybe as a member of Linkin Park side project, Fort Minor. Me, I know him as a member of the Beef Eaters United, an elite team of burger bandits based in Los Angeles. Although the one time I had the chance to dine with the B.E.U., Cheapshot was not able to make it so I was very excited to finally burger up to the man behind the turntable.

The pressure was on to perform. CJ Cheapshot only had 1 hour of time and needed to stay near the venue for then night’s show. What to do, what to do?!? Then it hit me! Where to go in Midtown if you want a tasty burger, quality service and to be treated like you are a myth or legend of the burgerverse!?!? SCHNIPPER’S QUALITY KITCHEN!!! I knew that a visit to the souped up burger counter that Jonathan and Andrew Schnipper run together would satisfy on all levels. Serving a quality burger is the #1 priority for these two brother’s and after only one conversation, you’ll understand just how important that is to the Schnipper’s. You can read more about them by clicking here while the rest of us continue on to …

THE BURGERS
We asked our two fantastic hosts to hit us with their best burger shot sans tomatoes. The 2 brothers looked at each other, put ear to ear wide grins and asked us to grab a table. While Jackie, Cheapshot and I sat in the sun on the Schnipper’s sidewalk seating area playing the “get to know me game,” the two burger geniuses scurried around the kitchen.

Up first, the Hickory Bacon Blue Burger. It comes with comes with bacon, blue cheese, crispy onions, hickory BBQ sauce, lettuce, Schnipper sauce and a tomato, however, ours did not have those on them! The Schnipper’s use an 80/20 blend of freshly ground beef that has all the flavors that quality beef should have and even when surrounded by all kinds of toppings, the fine beef taste still comes shining through. But the greatness doesn’t end there as everything from the salty bacon to the smoky BBQ sauce is made from the best of ingredients. 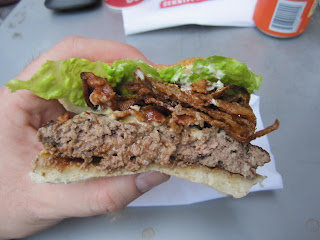 Before we could catch our breaths by “catch our breaths” I mean “finish our first burger,” Andrew and Jonathan were back with the Green Chile Cheeseburger. This is the Schnipper’s tribute to the Bobcat Bite, home to the original green chile burger which comes covered in green hatch chiles. As Jonathan explained to us, getting actual fresh green chiles at an affordable price in New York City is next to impossible, the Schnipper version substitutes using roasted poblanos with their special cheese blend and Schnipper sauce. I didn’t think they would be able to top the Hickory Bacon Blue but this burger most certainly did (albeit by a very small margin!)

Again, great beef tasty, fresh cheese, tangy sauce and then adding in fresh roasted peppers?!?! HELL YEAH! This burger has a really nice smokey-pepper taste that really stands above the competition. We were all nearly the fill point in our bellies but pushed through to finish this amazing burger. 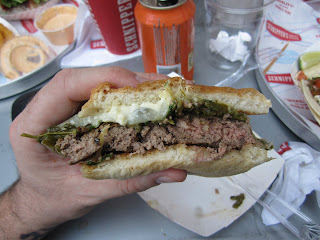 As if the 2 burgers, the creamy and thick bacon and macaroni and cheese, the crispy breaded onion rings with spicy chipotle-ranch dipping sauce, the sweet and savory sweet potato fries with candy-like maple dipping sauce, intense chocolate, black and white and cookies and cream shakes and fish tacos were not enough…the Schnipper’s brought out another pile of burgers! Were they trying to kill us with food? Quite possibly!

With tears of joy welling up from the lack of space in my belly, I pealed back the bun to reveal their special cheese blend, carmelized onions, bacon, arugula and Schnipper sauce which all together creates the Schnipper’s Classic burger. It’s not like we needed more food and I couldn’t fathom anything better than the green chile burger but leave it to the Schnipper’s to once again take it up a notch. This was easily the best burger of the day!!

With a MASSIVE case of the ITIS we profusely thanks the Schnipper’s for an above Quality meal and a fantastic hang. Jackie and I had to head back to the office to lie down under our desks and DJ Cheapshot was going to cry in his hotel room. I didn’t see his show that night (I went to get stung by the Scorpions) but my wife told me his set was amazing. DJ Cheapshot’s cuts – fueled by Schnipper’s burgers.

Congrats to Schnipper’s, you’ve made our TOP BURGERS IN NYC list!!!!! 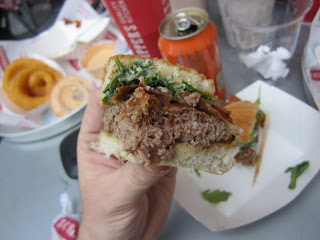 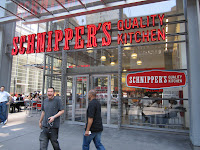 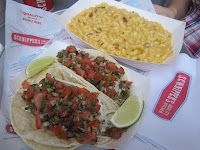 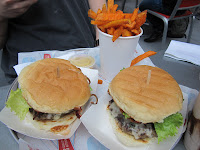 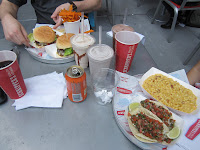 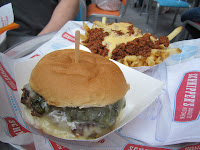 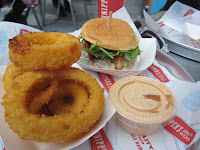 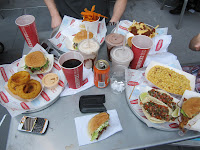 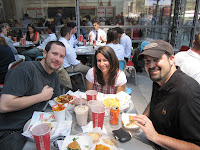 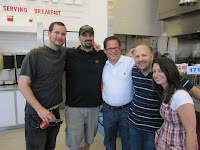