Well, that’s not exactly how it went but good enough. New York is a great town with a lot of fun things to do and perhaps our favorite (aside of eating delicious burgers) is riding bicycles around, exploring the city. I’ve been talking about putting together a site seeing bike ride of the city that would take us to a whole bunch of sites where famous movies were shot. Team Burger Leo, took it to another level and created a Ghost Busters Ride; a bicycle tour of Manhattan with 6 stops at Ghost Busters movie locations. Nona, Bram, Leo met up on this morning and headed off to bust some ghosts. Be sure to take notice of the shirts Leo and I are wearing.

There was no stopping our excitement for this bike ride, not even with a positron collider!!

To see a Google Map of the route click here and then switch to bikes.

I’ve also created foursquare venues for each location which you can find in New York City by searching for the tag “Ghostbusters ride.” 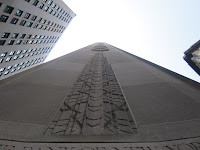 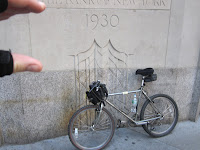 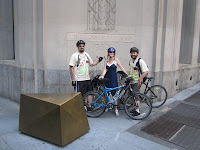 “Let’s say this bicycle represents all of the psycho kinetic energy in the New York area. According to this morning’s sample it will be a bicycle, 35 feet long and weighing approximately 600 pounds.” 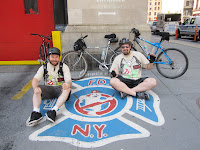 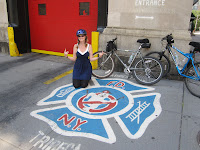 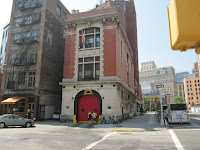 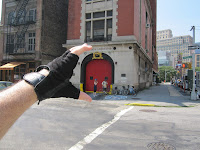 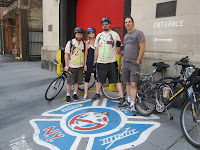 “I think this bicycle should be condemned. There’s serious metal fatigue in all the load-bearing members, the wiring is substandard, it’s completely inadequate for our power needs, and the neighborhood is like a demilitarized zone.” 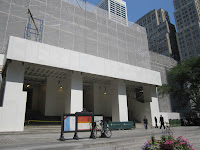 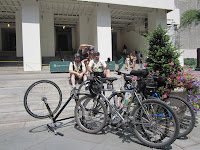 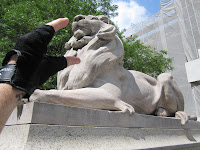 Dr Ray Stantz: “Symmetrical bike stacking. Just like the Philadelphia mass turbulence of 1947.”
Dr. Peter Venkman: “You’re right, no human being would stack bikes like this.” 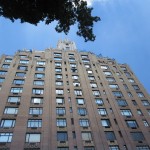 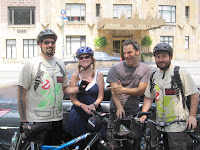 “Hold it! Now, are we actually gonna go before a federal judge, and tell him that some moldy Babylonian god is going to drop in on Central Park West, and start riding bikes around the city? Let’s show this prehistoric bitch how we ride bikes downtown.”

Location #5: Tavern On the Green – Central Park at 67th Street – Rick Moranis is cornered by the Keymaster. Foursquare Link. 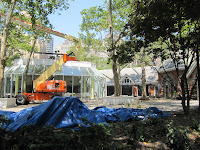 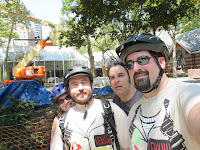 “Some moron brought a bicycle to a party and it went berserk. Gozer the Bicycler. He will ride in one of the pre-chosen bikes. During the rectification of the Vuldrini, the bicycler came as a large and moving Torg! Then, during the third reconciliation of the last of the McKetrick supplicants, they chose a new form for him: that of a giant Slor! Many Shuvs and Zuuls knew what it was to be ridden in the depths of the Slor that day, I can tell you!” 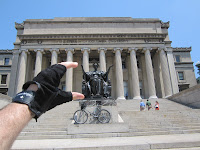 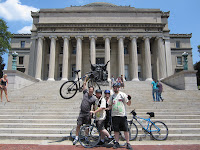 “All right, I’m gonna turn over the next pedal. Concentrate… I want you to tell me what you think it is.”

As we stood victoriously on the steps to “Weaver Hall,” I announced to the crew that I had 2 additional secret stops on our ride. The first of which had nothing to do with the Ghost Busters theme whatsoever. It just so happened that we were only a couple blocks away and I thought it would be fun.

Bonus Location #7: Tom’s Restaurant, AKA “Monk’s Diner.” The restaurant made famous by the TV show “Seinfeld.” 2880 Broadway at 112th St. It wasn’t necessary but hey, it was fun. Foursquare Link. 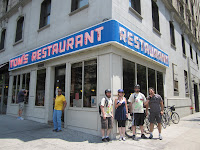 Bonus Location #8: Landmark Tavern, 626 11th Avenue. I figured if we were going to ride around town looking at locations where fake ghosts existed, they only way to do end it right would be to go where ghosts are real; The Landmark Tavern, rumored to be one of the most haunted buildings in all of NY, has been around since 1868, when there was no 12th Avenue. At the time it sat on NY’s waterfront surviving prohibition as a speakeasy. A Confederate Civil War veteran was stabbed during a knife fight in the bar and then died in a bathtub on the 2nd floor. That tub is still there and supposedly, so is his ghost. Foursquare Link. 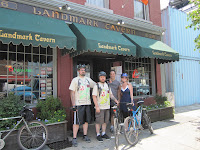 Dr Ray Stantz: We’ve ridden it, you know what that means? A complete particle reversal.
Winston Zeddemore: We have the bikes, and we have the talent.
Dr. Peter Venkman: It’s Burger time

THE BURGER
I planned on having the burger at the Landmark to mark the occasion. Word on the street is that they have a good burger despite potential protoplasmic condiments. Unfortunately for the blog, every one opted out of a heavy meal while biking and headed off home. Not one to be defeated, I instantly made a plan. I really wanted to write about this amazing adventure on Burger Conquest and that means I need to have a burger. Thankfully, there is a White Castle in my neighborhood!

I rode over the WC, locked my bike up front and went in to get one of their amazing steamed sliders. I love White Castle and how could you not? The food tastes great, its fast and they were the very fast food chain ever. After all of these years, very little has changed there. Their’ yummy sliders are still cooked a billion at a time on a flat grill and steamed with onions. The end product is a hot, savory, mushy burger that absolutely melts in your mouth. You can’t beat em when you’re on the run, need to feed 12 people at once, looking for a late night snack or you just need to eat one so you can chat about otherwise on your burger blog! 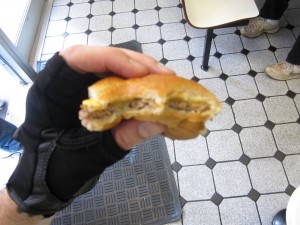 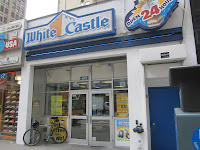 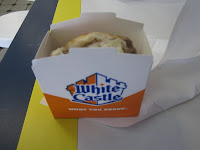