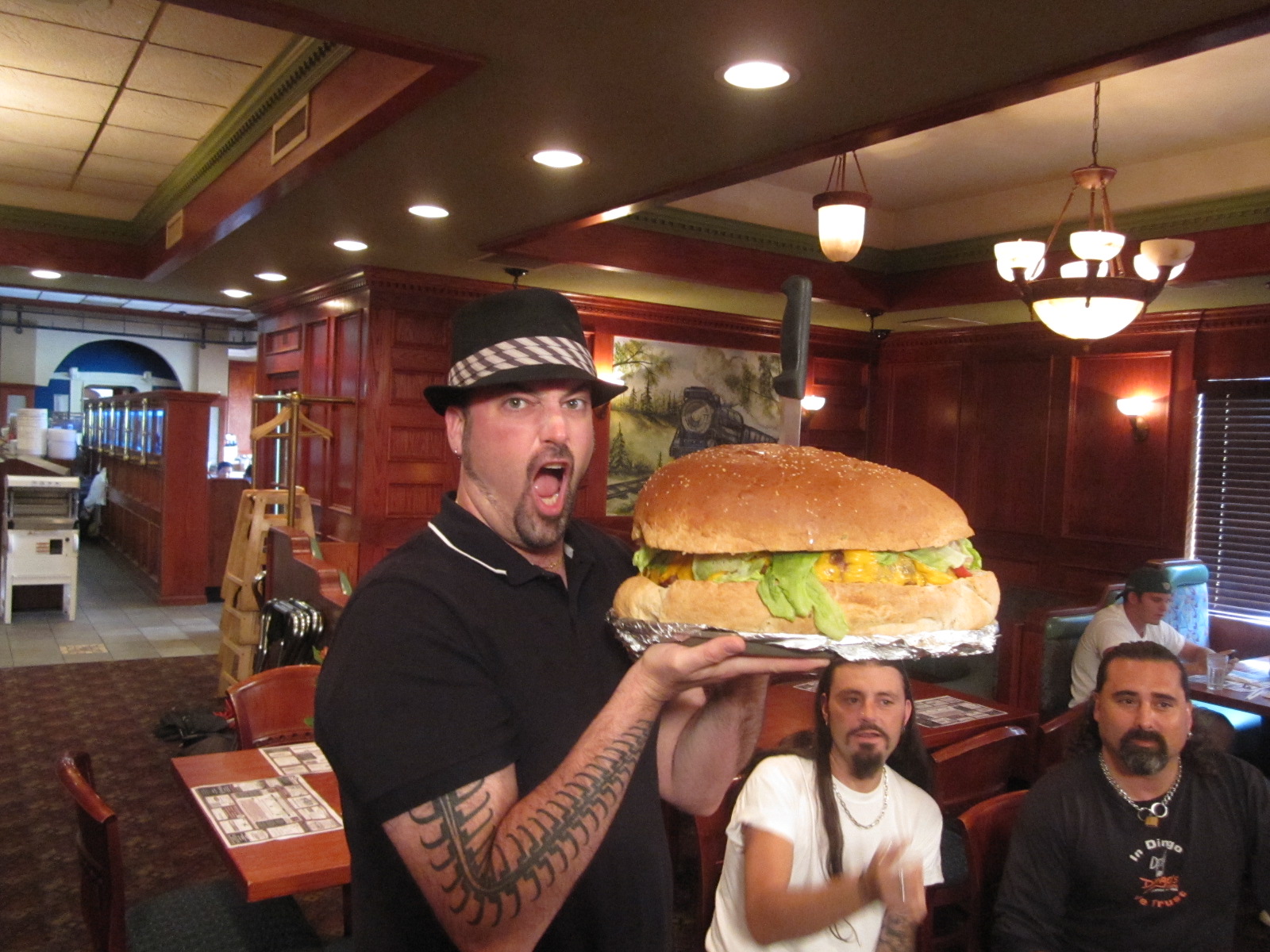 THE CONQUEST
When I started this blog I never intended anything other than to eat some burgers with my friends and post up some stories about our travels. It’s been really fun, which is all it’s supposed to be. The day it stops being fun, I will stop writing the site. I didn’t put any expectations on the success of the site so any time I get invited to try a burger, get interviewed, am asked to guest blog or even get retweeted, I get all excited. So when I get an email asking if I would like to be on TV for eating burgers, it seems ridiculous. All I’ve done is eat burgers. It was never mean to be a career path or vehicle for public notoriety. It all seems pretty funny to me and I like to joke that I have become “burger famous,” which is as silly as it sounds. Don’t get me wrong, I don’t take it for granted and I am honored when it happens.

When I found this email in my in box, I got pretty excited; “Hello… I’ve checked out your blog… Pretty cool stuff. I’m not sure where your home base is located… But figured it’s worth a shot in contacting you… any chance you’d be in the New York/New Jersey area next week & willing to participate in a segment for a new Food Network show?” The answer was of course YES. The same who people produce “Diners, Drive-Ins and Dives” were asking me to appear in an episode of their new series “Outrageous Foods.” The premise behind the show is a showcase of restaurants that have a menu it that is, well, outrageous!

Clocking in at a belly busting 50 LBS, is the “Mt. Olympus” and if you and 4 friends can finish it in 3 hours or less, the Clinton Station Diner will give you $1000. Sound like a little too much? They also have the Zeus at 7 LBS, the Atlas at 3 LBS, the 2LB Hercules and for those faint of stomach, the 1 LB Achilles. I’m not one for over-eating or big meals as I like great meals, not huge ones. Normally I would pass on the opportunity but my burger fame was clearly on the line. The producer asked which burger I was willing to take on and if I had any friends who wanted to join me. Little did she know, I have a burger army known as “Team Burger” and they love to eat.

My buddies Rich, Rob, Kyle and Chuck were to exited to mouth fight a burger. Also joining us, Buckshot from “Mosh Potatoes,” the Rock and Roll Cook book and 5 of his biker buddies from the NJ rock and roll club Dingbatz. when Sarge, Dingo, Mike, Sick and Ox showed up, they looked damn hungry and ready to eat their own weights in burgers. 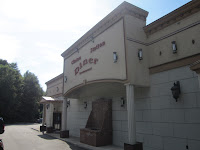 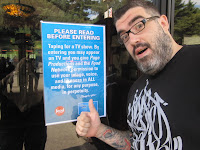 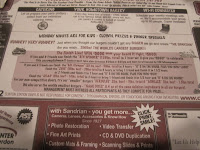 We arrived “on set” at 1030 am and were shown to a table in back of the restaurant. They were still prepping the burgers and we had to wait until they were done. As we nibbled on small pieces of cheese to kick start our stomachs, the producers revealed their plan for the group. They didn’t want us to eat the Mt. Olympus, they wanted us to eat all 5 of the specialty burgers! But that wasn’t the biggest surprise of the day as we found out that we were going to be cheered on by Tom Pizzica. Only a few days prior, Tom came in as the runner up in The Next Food Network Star challenge. While Tom didn’t win his own cooking show, they asked him only moments after the show close if he would want to host “Outrageous Foods.”

THE BURGERS
While they were setting up the cameras, I took a peak into the kitchen to see if I could get a preview of what was to come. My heart sank in my chest as I started to wonder how the hell I was gonna fare in this challenge. I snapped off a few photos as if I was getting pictures of an oncoming attacker intent with mugging me. The cook asked me if I was ready and when I said “I don’t think so” he asked if I would prefer to eat the world’s smallest burger, with a 0.4 ounce patty lovingly named a “Nano Bite.” We put the 2 of them side by side along with a bottle of hot sauce to give the photo a proportional point of reference. 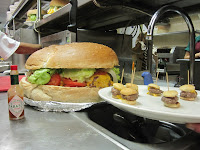 Finally they were ready to shoot and as the 11 of us tried to do the math on a 50 LB burger, the production team informed us that we would be eating not only the Mt. Olympus but also the Zeus, the Atlas, the Hercules and the 1 LB Achilles! Ay dios mio! How the hell were we going to attempt such and “outrageous” feat. 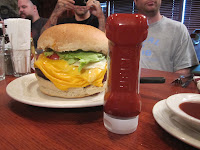 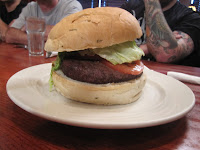 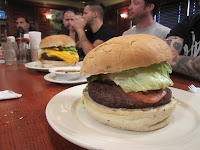 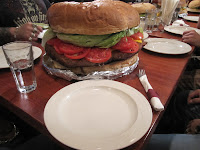 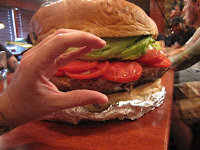 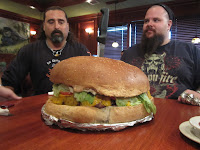 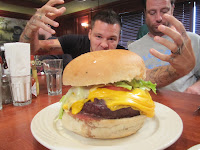 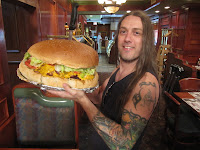 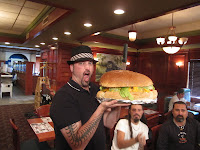 The producer yelled “action” to start the feast. The burgers were hard enough to slice up, let alone eat! I of course got picked to share in the Mt. Olympus and they only way it could be picked up and eating was by holding my hands around it like wood shop clamps! While we were busy shoving burger in our face, Tom came around to discuss the challenge with each of his. It was his role to coach us through our burger eating dare.

As for the burger itself, it’s a 25 pound seasoned patty made from ground beef that is baked in the oven and dressed with 25 pounds worth of toppings and bun. While there was no doubt that the burger was made from fresh ground beef, it was over cooked and a little dry. To judge the burger on it’s taste is almost unfair as the difficulty in cooking something of this size provides a challenge equal to consuming it! As a side note, that is why I judge burgers with a 10 ounce rating scale; cooking patties larger than that leave to much to risk. But I digress. The bun to burger ratio here makes it particularly difficult to eat. A soft, white, squishy bun it is not. To hold up the weight of the Mt. Olympus you need a very sturdy bun, therefore its very dry. 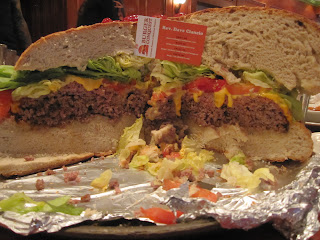 Want to know how we fared in the battle of the burgers? You’ll have to wait for the episode to air! I wouldn’t want to spoil it for you! But I will say that when it was over I didn’t feel like I ate the burger, it felt like I got hit with it! 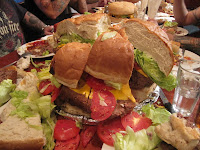 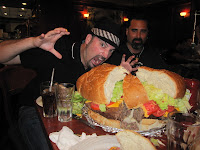 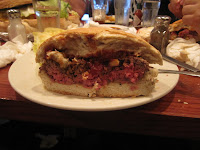 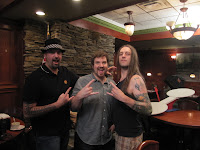 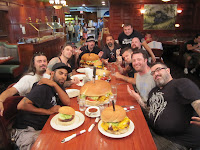 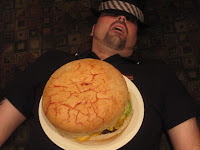