THE CONQUEST
Take me out to the ball game, Take me out with the crowd. Buy me some beers and pizza and nachos and Italian beef sandwiches. I don’t care which stadium I’m at, Let me eat, eat, eat for the whole game, food is my claim to fame. For it’s one, two, three bites, I ate, At the old ball game. There is nothing that gets hungry like a good ole baseball game so when my travel for work brings me near an MLB park, it’s an added bonus.

Two of my clients, Big Jay Oakerson and Shadows Fall were both out on the Rockstar Energy Drink Mayhem Festival. As I looked at the routing to figure out which of the shows I would hit up on the tour, I cross referenced the dates with the cities baseball team. When I found out that the show in Detroit, MI, my hometown, happened the day before a Tiger’s home game, I immediately booked a flight. I planned a perfect weekend all centered around eating.

Friday – the big Rockstar Energy Drink Mayhem Festival show at DTE.
Saturday – Lunchtime Burger Conquest at the Redcoat Tavern followed by some sight seeing around downtown. Then pre-gaming at the Atwater Block Brewery before watching the Detroit Tigers vs the Los Angeles Angels.
Sunday – Backyard BBQ with friends.

Say what you will about the city of Detroit, I DARE YOU. It’s a socially significant, character building city, rich with history and a unique story to tell. I know most people will call it a “shit hole” or a “dump” and I tell them the reason we don’t promote the city as a tourism destination is because we don’t want them, or the Canadians, to ruin our fun. I realized, not unlike the band Superchunk, “Detroit Has a Sky Line,” and a beautiful one at that. The focal point is the now home to General Motors, the Renaissance Center.

The “Rencen,” as it’s known by locals, sits at the end of Woodward, the biggest and most important North / South bound street in the state of Michigan. As it sits on the banks of the Detroit River it looks as though the entire city was built out from it and in some regard that is how the city evolved. Within only a few blocks you will find all the city has to offer with professional baseball, hockey and football teams to bars, clubs, restaurants, river cruises, breweries, casinos and the infamous Greek Town. It’s a great place to start out a tour of the city and for nostalgic reasons, that is where our afternoon began. 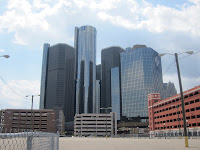 THE BEER
Just East of the Rencen is an area of Detroit known as Chene Park / The Rivertown-Warehouse District. A lot of the buildings here are run down and deserted warehouse, save one. At the corner of Wight St and Joseph Campau St, you will find one of Detroit’s little gems; The Atwater Block Brewery. All of Atwater’s brews are made in the traditional German way with equipment that was from Germany. Their slogan is thankfully just as great as their beer – “We drink all we can and sell the rest.”

If you’re in the area, it’s worth a stop in. Not only is the beer fantastic but Mark Reith, the owner and all his staff are incredibly friendly and rich with beer knowledge. They closed their tap room, opting instead to allow the beer curious to actually sit amongst the brewing equipment. It’s hidden down on a street, off an alley in a part of town that isn’t heavily populated. As my friends Adam, Michele, Logg and Lyntz pointed out, it kind of feels like you’re in a gigantic speakeasy with bootleg beer that just came across the nearby Ambassador Bridge from Canada. Feel free to taste all their delicious beers but be sure to put your lips into their Dunkel as well as the Vanilla Java Porter (click to read reviews on the website for my New York bar Idle Hands). We slugged back a few ourselves while we watched the TV show “Detroit 1-8-7” being filmed out side the brewery. It’s a perfect activity before hitting a game at Comerica Park. 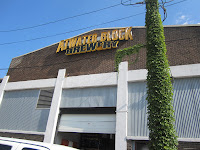 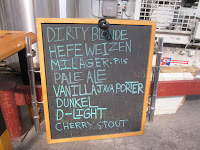 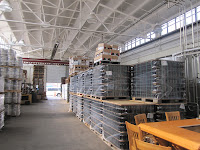 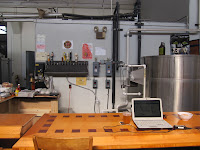 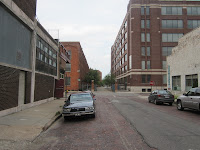 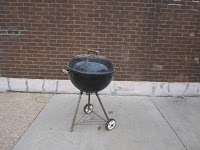 THE STADIUM
I love me some Detroit Tigers. They aren’t the greatest team and nor do they have the greatest history but they always fight on. It’s been a long time since the Gibby lead them to victory in 1984 and the team still plays on. Built in 2000, Comerica Replaced the fan favorite Tigers Stadium. With much hesitation, Tiger fans, following the magic voice of Ernie Harwell, moved from Cork Town to the new stadium’s location in Greek Town. History aside, it’s a pretty fantastic park.

Upon entering the park, which is literally smack dab in the middle of downtown, you’re greeted by a massive, 15 foot, stone tiger statue. They’re such a spectacle in fact, that you can bet there will be a line to get a photo with them. In fact, there are 8 other stone tigers throughout the stadium, can you find them all? You’re immediately lead into the park with a kiddie section, complete with carousel to your left and a somewhat hall of heroes in front of you. Stretching a decent length of the main floor, just behind the seats there is a decade by decade mini-museum “Walk of Fame” showcasing the teams nearly 200 year old baseball history. There’s also a gigantic fountain, ferris wheel, beer hall and many sculptures. It’s an amazing park and well worth at trip to see a game or to just pig out in the stands. 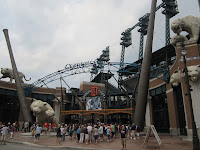 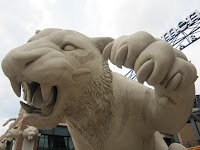 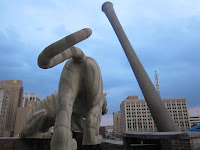 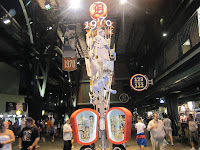 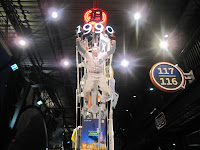 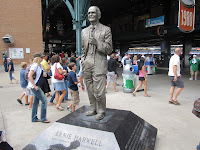 The stadium has two levels, the main one of which, is sunk into the ground so fans walk into the stadium at the top of the lower deck. All the main food and drink options can be found on the lower level with limited choices on the higher deck. At the far end of the field is a terrace known as “Pepsi Porch” where you’ll find food, merchandise, bleacher seats and of course, the dining area with spectacular views of the game known as “Kaline’s Corner.” I was pretty excited to spend the evening taking in a game, eating all I could and pounding beers with 15 of my friends and family members. 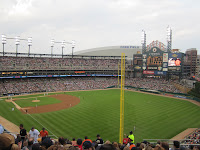 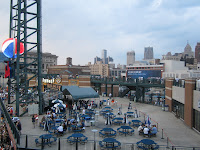 Comerica Park offers all the baseball standards mentioned in “Take Me Out To the Ballgame,” (the original version, not my remix above) as well as a few surprises, included Italian Beef Sandwiches. They have a wide selection of beers including the regular American pilsners, $5 cans of Pabst Blue Ribbon (can I get a “hell yeah!?”) and if you search it out, there is one Atwater Beer stand.

THE DIGESTIONS
If it’s your first trip to the stadium head right over to any of the Little Caeser’s concession stands. Never heard of it? It’s a Detroit staple and yet the 3rd largest pizza chain in the world. Owner Mike Illitch started the company in 1959 with one store front in Garden City. Its now he largest carry-out pizza chain in the world. The pizza has been so successful that Mike has grown his business to include owning the Detroit Red Wings hockey franchise as well as the Detroit Tigers baseball team. That’s a lot of “Pizza! Pizza!” Be sure to try a little “Pan! Pan!” and get a Ccorner Cruncher pizza. It’s a crunchy little square pizza covered with your choice of toppings included their tangy sauce served on dough that is made fresh daily. It goes well with a few beers and a the starting line up. 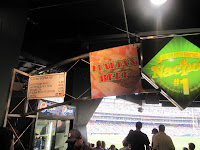 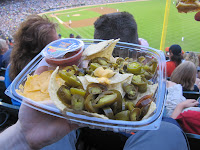 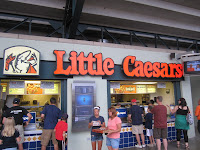 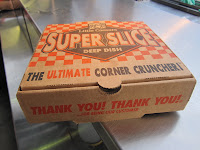 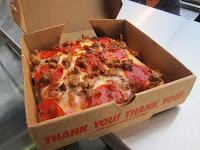 After games on Friday’s and Saturday’s at Comerica Park, there is a huge firework display. It’s shot off from center field and a fun and exciting way to end your experience. God Bless America. God Bless Baseball. “Bless You Boys.” 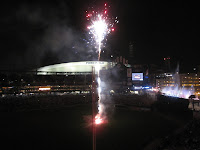 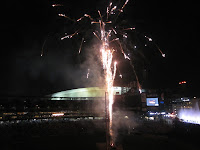 THE JOKE
And now, my favorite joke of all time and #1 baseball reference!

Q: What do old ladies and the old Tigers have in common?
A: Rusty Kuntz! 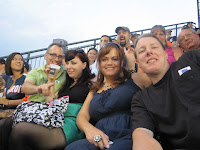