THE CONQUEST
It’s a sensation you feel deep within your stomach. You’re checking the mail when you reach in and see it. Suddenly your nerves swell up, your muscles twist into knots and your heart skips a beat. You know exactly what its going to say on the inside once you tear away the perforated tabs. The bright red (or purple) strip reveals your dark future: “Important: Jury Summons Enclosed.”

Jury Duty. 2 words combined that spell out you’re darkened feature. You scramble to book a trip out of state, a doctor’s appointment, a meeting with your boss…anything to get out of doing it. Eventually, you’ll end up in my situation; 7 postponements and a sentence of mandatory service. Unless you have a major obsession with “CSI” or ‘The People’s Court,” no one looks forward to serving Jury Duty. Blah, blah, blah, civic duty, yeah, yeah. I hear you. But other than serving my duty to the great city of New York, there is nothing to look forward to with Jury Duty. As I was prepping for possible 10 days out of the office and shut off from society. There was literally nothing I was looking forward to about it other than getting it done.

Then I got an email from my burger eatin’ buddy, Buckshot, which read; “My wife’s place where she works owns this new burger place. They wanted to see if you would be interested in doing a Burger Conquest with them. Its a pretty good burger. http://luckybunsnyc.com/” I clicked the link which revealed a new outdoor cafe that served gourmet burgers. It’s part of a group of outdoor restaurants grouped together under the named “Open Air Cafe.” They have a taco spot, “Choza“, a sandwich shop, “The Pantry,” a pizza and pasta eatery “Sauced,” and of course, a burger joined named “Lucky Buns.”

The 4 restaurants recently opened this summer under the able the talented knife and fork of Dominic Giuliano, Executive Chef from South Hospitality. Broken up into 2 plazas, for at total of 35,000 square feet of outdoor dining; one on the North side and one on the South side of the NYC Municipal Building. Which is where in the city? Right down the block from the New York Criminal Court. If I could just survive the process of Jury Duty, at least I had tasty burgers to look forward to.

After several non-eventful hours in the Juror’s lounge, we were excused for lunch. I hit up my buddy Paul and asked if he wanted to meet me for a burger to celebrate his birthday. He said yes and few minutes later met me on the North Side of the Open Air Cafe. We met up with Matthew Wagman, Dominic’s partner in the Open Air Cafe. Matthew sat us down at an open table and ran off to the kitchen after asking only one simple question; “brown or pink?” We both said “pink,” and Matthew disappeared into Lucky Buns. He returned a few minutes later with a massive bag over flowing with food. “I want you to try as many menu items as you have room for!”

THE BURGERS
Matthew brought out 5 sandwiches as two sides, french fries and a Dominic special, Tempura Green Beans. Once Paul and I were able to pop our eyeballs back into their sockets, we began to dig in.

“The Works Burger” – Served with Lettuce, tomato, American cheese, sauteed onions, special sauce. The patty on each burger is a made to be the gourmet version of fast-food style burger. It’s a little thicker than your standard fast-food patty making it just the right size for the burger. They all come with a backyard BBQ flavor about them, with a good juicy, grilled-cooked flavor. Add in the rest of the toppings and served inside of a fresh brioche bun. The special sauce has a tangy kick to it but spread very sparingly so as to not out flavor the meat. 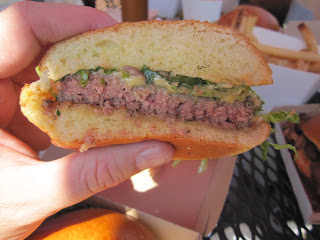 “The Dominator” – Don’t let the warnings fool you, this burger is only intimidating in name. Double meat, double cheddar cheese, double bacon & BBQ sauce. The contents meld together in greasy (a good way), melty party of flavors. Again, the burger toppings, which are very fresh and delicious, never get in the way of the beef. The thick and just cooked right bacon adds a smoky taste and a chewy texture, just the way I like it. What separates “The Dominator” from other burgers served with BBQ sauce, is the UNBELIEVABLE strawberry chipotle ingredients. It’s sweet, tangy, spicy and very unique. 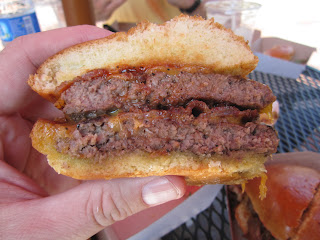 Pulled Pork Sandwich – With our excitement over the BBQ sauce, we put the Pulled Pork Sandwich next in the pecking order. It was on this 3rd sandwich that we took note of Dominic’s style; tasty fresh toppings that never outshines the taste of the beef. The meat had a really natural and savory pork flavor. The homemade BBQ sauce gives it a matching peppery and sweet taste. DEELISH. 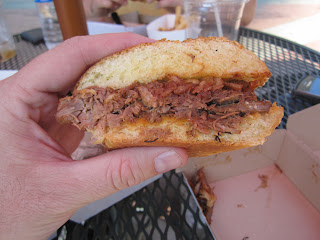 Grilled cheese – This one is an all American classic done up right, with just the right ratio of bread to cheese. The sourdough style bun has 3 delicious and melted slices of cheese inside: Cheddar, Swiss and Jack. It’s made with the same TLC as the other sandwiches and every bit just as good. 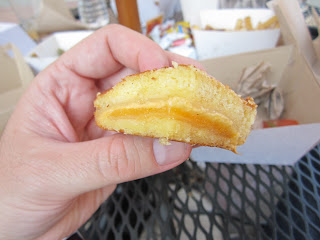 The french fries are long-cut, crispy, golden and delicious. They’re good but if you’re only getting one side item at Lucky Buns, go for the Tempura Green Beans! They’re fresh, crispy and with only a little bit of breading. Most restaurants over fry or focus on the breading, not Lucky Buns! The fresh green bean itself is the m
ajor player in this tasty snack. With a happy stomach, I thanked Matthew and headed back to the court building. 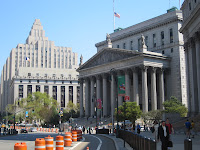 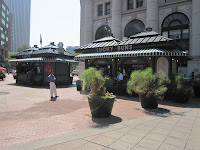 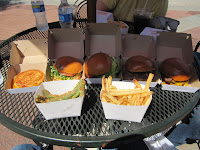 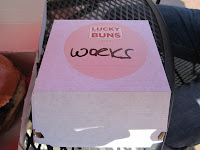 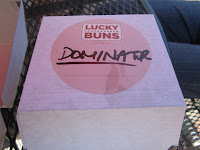 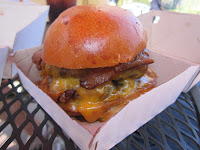 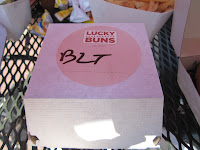 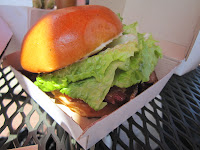 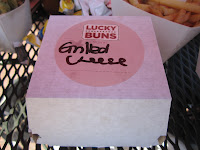 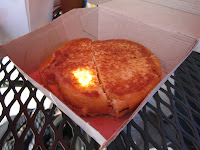 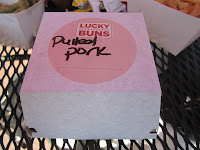 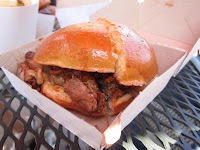 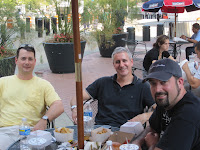 Day 2 of Jury Duty came and with the same lack of activity and hum-drum silence. I sat in the Juror’s Room with happy thoughts of the delicious food memories of Lucky Buns. When the Bailiff excused us for lunch, there was only one thing on my mind; the Open Air Cafe. This time I marched myself over the South Plaza, right at the foot of the Brooklyn Bridge and got in line for Choza. It’s a very simple concept with a very simple menu; a taqueria that serves 4 fillings in your choice of tacos, burritos or bowls. They also offer salads and a variety of Mexican inspired sides. While I stood in line licking my lips, Matthew walked up and said “you’re back!” I told him “while I love burgers there is also a very special place in my heart for tacos.”

THE TACOS
An order of tacos comes with 3 of them filled with Carne Asada, Carnitas, Pollo Colorado or combination of fresh seasonal vegetables. I asked for one of each kinds of meat and side of corn on the cob. A few minutes later I was seated at an outdoor chess table opening to go boxes with the smell of fresh Mexican food wafting into my nose. Each taco is served traditional style, wrapped in 2 warm, corn tortillas and garnished with chopped onions and cilantro.

Pollo Colorado – The marinated chicken is tangy and with just the hint of spicy heat. The meat is juicy and not over cooked, which is really easy to do with chicken. 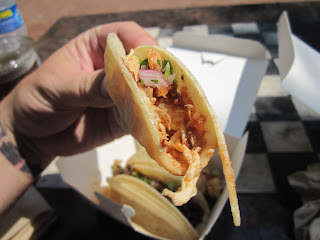 Carne Asada – MMM, MMMM, MMMMMM!! The beef is juicy and tender. It has the tastes of deliciously charred steak marinated in spices and peppers, no doubt a result of dry rubbing the meat before grilling. The sweetness of the red onion makes a nice balance of flavors. This one is spicier than chicken but without being too hot. 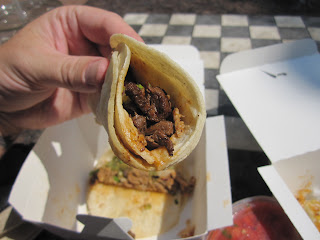 Carnitas – Made from braised pork is covered in salsa verde has and a real citrus-like tang to it as well as a little bite. The pork is simmered over night in citrus, chilis, and seasonings. Subtleties of pork shine through. Juiciest one of the bunch. 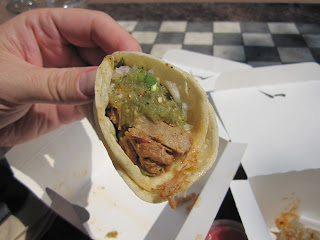 Elote (Corn) – Sadly, this one needs work. Its soggy and needs spicing up to keep it being bland. The cheese has a subtle flavor at best. To be fair, when I told Matthew I had ordered it, he said “the corn is 100% yet,” and while he was right, I wouldn’t let it keep you from eating at any of the 4 Open Air Cafe options. Finally, we have a reason to look forward to serving Jury Duty. 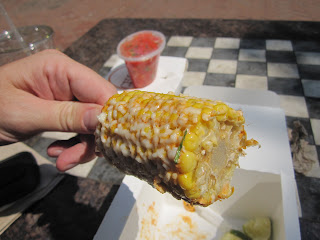 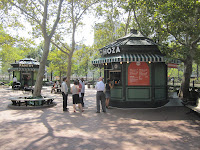 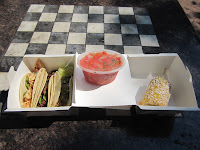 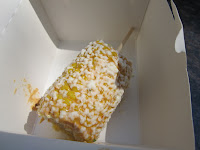 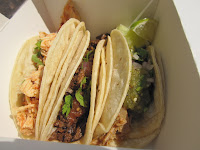 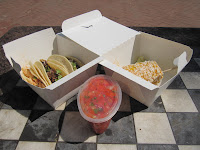