Wendy’s Old Fashion Hamburgers – Parts Is Still Parts But No 411 On the Beef.

THE CONQUEST
Named after his fourth child, Melinda Lou “Wendy” Thomas, Dave Thomas founded the first Wendy’s Old Fashioned Hamburgers restaurant in Columbus, OH. They yeas was 1969 and since then has grown to become the nation’s 3rd largest hamburger fast food chain. Dave Thomas, fashioned his burgers after the Kewpee Hamburgers he used to frequent in his home of Kalamazoo, MI. They too had square burger patties and served malts. Dave took those two ideas and created the Wendy’s Classic and the favored chocolaty, malted treat now known as the Frosty. Upon opening their second location, only a short year after the first, they unveiled what Wendy’s claims to be “the first modern-day, drive-thru window.” In 1980, once again as pioneers, Wendy’s introduced the first fast-food salad bar.

I’ve never discriminated against fast-food on this site and although I would prefer to gourmet burgers, I do have a soft spot for Wendy’s. When I was a kid we went to Wendy’s as a special alternative to their 2 major competitors. I always thought they had fresher tasting burgers and the best Chicken Nuggets in the business. While driving to the campground site for my annual birthday camping trip, we pulled off the highway for a little lunch at Wendy’s.

I can’t ever remember ordering anything from Wendy’s, other than a salad, that wasn’t on the Super Value Menu. To answer your question, no, I have never had a Baconator! With only $1.29 (then 99 cents) you have the choice of French Fries, soda, Cheeseburger, Jr. Bacon Classic, Frosty, Chicken Nuggets or Crispy Chicken Sandwich. This road trip pit stop was not going to be any different. I ordered a “value” soda, “value” Fries, a 5 piece Chicken Nuggets and last but certainly not least, 1 Jr. Bacon Cheeseburger. The latter comes topped with only cheese, bacon and lettuce.

THE BURGER
Wendy’s has always had good sauces and I love to dip the French Fries in their honey mustard sauce. The French Fries, which always seemed a little dry and flimsy to me, taste much better once dipped in the sauce. I have a strange habit at fast-food restaurants, where I eat all my French Fries at once before starting in on anything else. This is mostly because they suffer the most when they cool down but also because I’m weird like that. My Mom always fun of me as a kid, saying that I ate in pecking order; eating what was closest to me first and then moving in 1 direction around the plate / tray.

In this case, next in order would be the Chicken Nuggets. They are my favorite in the fast-food business and must be eaten with every visit to Wendy’s! 5 for only $1.29, how can you not!??!
The breading is crunchy while the all white chicken meat on the inside stays juicy. Once dipped in Wendy’s Barbecue sauce, they become a winning treat.

Regardless of “pecking order” I always save the best for last when eating fast-food and that’s the Burger. I ordered my mainstay, the Jr. Bacon Cheeseburger, the no-nonsense version of the larger Bacon Cheeseburger. Wendy’s bacon Is the crunchiest, thickest and best in the fast-food game which makes getting this burger so appealing. With childlike excitement and nostalgia, I unwrapped the Burger ready to pounce on in its bun. Upon visual inspection, the sandwich seemed much smaller than I remembered. Not only was the Burger smaller but it was also drier than I remembered. Wendy’s always seemed to have juicer burgers than their rivals but that was certainly not the case with the well done Burger. It’s been some time since I have had Wendy’s but my mental picture has this burger a lot juicier. There is one good thing about the small sized patty; the cheese to beef ratio is about 50/50. Still, I wolfed the whole thing down in 4 bites or less.

As I finished off the Burger I felt like Clara Peller asking “Where’s the Beef?” 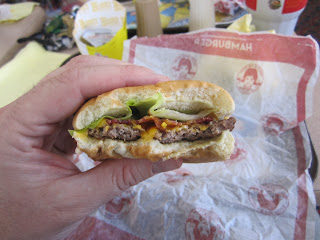 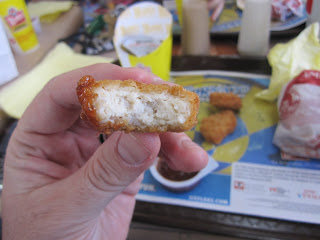 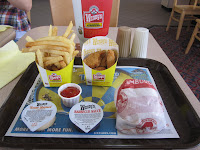 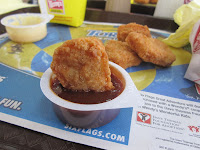 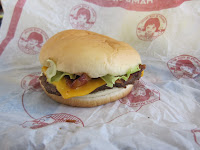 3 Responses to Wendy’s Old Fashion Hamburgers – Parts Is Still Parts But No 411 On the Beef.