The Grill ‘Em All NYC Victory Lap Sells Out!!
http://grillemalltruck.com

To celebrate their recent victory on the Food Network’s “The Great Food Truck Race,” the guys from the Los Angeles based Grill ‘Em All Truck made a triumphant return to NYC to serve their burgers. Unbelievably appreciative of the support that New York City showed to help them win the competition, the guys took over 8 restaurant kitchens to serve their unique menu. With A LOT of help from Burger Conquest, Burger Maker, Whisk, Bar Coastal and Shmaltz Brewing, the Grill ‘Em All crew sold out every single performance on the “Victory Lap.”

No two services were the same as they were in different restaurants and with a constantly changing and limited menu. While the unique events were extremely complicated and difficult to plan, the guys proved they can do what they do best, without the truck that gave them notoriety, THE BEAST!

As the “Victory Lap” rolled on, secret menu items were announced and added to the menu. Thrillist let out the word on the extremely limited burger, the Dee Snider. 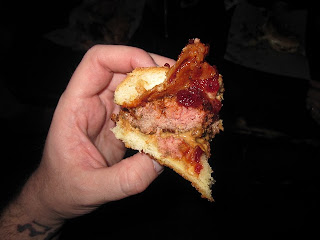 Also announced was the FIGHT FIRE WITH FIRE. It allowed fans to “upgrade their burger” by letting the patty take a ride in the Bar Coastal “Suicide” hot wing sauce, thus creating a sandwich that was as hot as the sun. 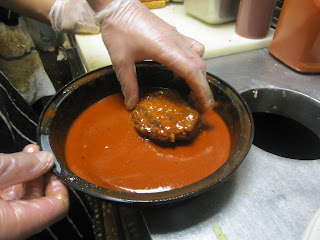 During the last meal on the “Victory Lap'” at Traffic The Tankard was announced via twitter practically challenging customers by allowing the Chef to top a burger with whatever they were feeling at that moment. 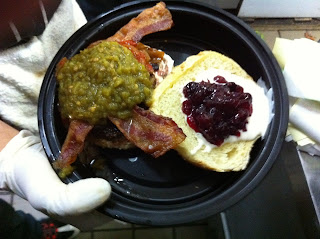 The real surprise came in the form of The Annihilator, a burger only served twice while at Traffic. The burger was an inhuman stack of multiple grilled cheese sandwiches, Burger Maker Patties, bacon, french fries and more cheese! This monster was served to 2 patrons as a surprise, one of which was ex-NFL player and now CBS College Football Analyst, Brian Jones. 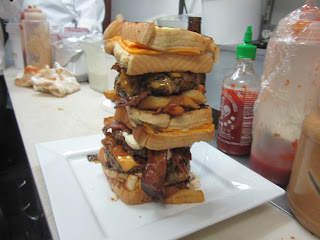 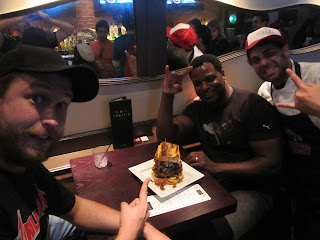 Several hungry and excited fans attended multiple meal services and were able to sample several different Grill ‘Em All Truck signature burgers. One such satisfied customer was Camille Ford, the Host of the Travel Channel’s “Food Wars.” The Grill ‘Em All guys met Camille when they were once featured on the LA Burger Wars episode of the show. 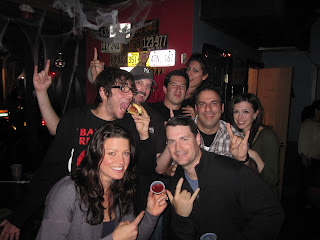 Thanks to a number of talented chefs, friendly restaurants, hardworking cooks and servers and a whole mess of hungry people, the Grill ‘Em All “Victory Lap” was a massive success and a ton of fun. On behalf of Burger Conquest and Grill ‘Em All, we say “thank you New York. We love you too!” They will be back again but not sure when.

The rest of the world had better look out, we are already planning on doing this in other cities. Interested restaurants and parties should contact bookgrillemall@burgerconquest.com

One last time, a massive thank you to Burger Conquest, Burger Maker, Whisk, Bar Coastal and Shmaltz Brewing for helping to make this event happen.

Here is a gallery of behind the scenes and in the action photos I was able to take during the Grill ‘Em All “Victory Lap.”

More information about the Grill ‘Em All NYC “Victory Lap:”

The Grill ‘Em All Truck, fresh off their victory in Food Network’s GREAT FOOD TRUCK RACE is doing a “Victory Lap” to thank New York City!

L
A’s favorite mobile burger makers, Chef Ryan and Matt from The Grill ‘Em All Truck, are coming back to N.Y.C. – with a vengeance! Armed with their famous burgers, and new N.Y.C. exclusives, this is set to be one of the hottest food events all year. From October 21st to Sunday October 24, Grill ‘Em All will be taking the city by storm!

At each location, Grill ‘Em All will be offering a limited number of burgers, and a changing menu. Be sure to get to each location before they run out! In addition, they will be selling their official Grill ‘Em All merchandise – so you can eat in style.

On Thursday October 21, the guys will be hosting a release party for their new “Mosh Pitt” BBQ sauce in conjunction with www.metalinsider.net ‘s Mosh Potatoes; “The Rock and Roll Cook Book” (http://www.moshpotatoescookbook.com/) release party, at Idle Hands Bar (25 Avenue B, Downstairs) from 5-7 PM (http://idlehandsbar.com)

On Friday, October 22nd, Matt and Ryan from Grill ‘Em All will be hosting a special late night service at Idle Hands Bar / Billy Hurricane’s (25 Avenue B) from 11 PM – 1 AM (http://idlehandsbar.com) where they will debut 2 new food items being made only for the N.Y.C. “Victory Lap” only”. They are taking their famous “Behemoth” burger and making a cocktail meatballs version in addition to truffle tater tots! Taking place at the same time, will the debut screening of “Madness in Manila” a new live DVD from Grammy nominated metal band Shadows Fall (http://shadowsfall.com) due out on October 25th

On Saturday, October 23rd, Grill ‘Em All will debut their newest creation, The Pantera Burger; Rub BBQ pulled pork and deep fried macaroni cheese, crispy bacon and Grill ‘Em All garlic aioli served with choice of beer milkshake or draft. This special burger will be served at Rub BBQ only. There will only be 25 of these made available and its first come first serve. More details about The Pantera burger can be found in this interview with Chef Ryan and Rev from Burger Conquest on Metalsucks.net http://www.metalsucks.net/2010/10/19/the-grill-em-all-burger-trucks-chef-ryan-harkins-speaks-with-metalsucks/

Thrillist Readers can enjoy a secret menu item, the Dee Snider, available in extremely limited quantities at each location. The twisted burger known as the Dee Snider comes with local peanut butter, strawberry jelly, bacon, and sriracha. Full details can be found at http://www.thrillist.com/eat/food-dining/2010/10/19/grill-%27em-all-victory-lap

BURGERS – all patties are Burger Maker official “NY Blend” patty made from Porterhouse and chuck. (http://burgermaker.com/nyblend.html)

THE PANTERA – $20.95 RUB BBQ pulled pork and deep fried macaroni cheese, crispy bacon and Grill ‘Em All garlic aioli served with choice of beer milkshake or draft. (Burger without beer available for $13.)These have never been served before and only 25 will be served at RUB BBQ for the “Victory Lap.”

Grill ‘Em All Behemoth Balls – 3 meatballs / $4 served in the Grill ‘Em All signature “Mosh Pitt BBQ” sauce with onions, cheddar and bacon. (These have never been served before and will be launched during the “Victory Lap.”)

Heavy Metal and cult culture fill your head with so many visions and ideas. They make your soul glow with the unholy light and create the sensations to the senses. But still they leave your stomach empty and sad. Take heed heshers: Grill ‘Em All is here to fill the void that music and mayhem cannot. Enter the realm of the burger.

Grill ‘Em All is steadfast in the belief that the heavy metal and culinary worlds were bound to collide one day in a victorious marriage of massive meat and riffage. Where better for this battle to commence than the city of fallen angels? Los Angeles, your cries in the night have been answered. Cry no more!

Grill ‘Em All is led into battle by the team of chef Ryan Harkins and Matthew Chernus. The two have been allies and band mates for over twenty years. Ryan has paid his dues as a veteran of professional kitchens for over a decade strong, having worked in Chicago, Los Angeles, St. Louis and Cleveland, Ohio. The combination of his fine dining background and strong Midwestern roots has left him a desire to place a gourmet take on his first love, the hamburger. Dare to stop him! Matthew also beckoned as the future of America is an ex professional wrestler and he owns a megaphone. Need I say more on his behalf? I dare not in fear of being Liger Bombed through a barbed wire board with black windows and broken forties of King Cobra beneath.

The Grill ‘Em All Truck N.Y.C. “Victory Lap” is being presented and run by Rev. Ciancio from https://burgerconquest.com with assistance from Burger Maker an
d Whisk.

Chef Ryan and Matt are available for interviews over the phone and in person. Please contact therev@burgerconquest.com to schedule and for all inquiries.

1 Response to Grill ‘Em All NYC Victory Lap Sells Out