THE CONQUEST
So what does a media mogul such as myself do after staging a successful burger oriented public event like the 2nd Ever Polar Brrrger Club at the Shake Shack? You go have a coolie with your buddy to celebrate. That’s exactly what my friend Paul and I did after eating burgers in The Great Blizzard of 2010. But after pouring a couple cold ones down our throats at Idle Hands bar, we started to get hungry again.

Paul, clearly not being sane of mind, suggested we get another burger. A double Burger Conquest? It does happen and when it does, it’s beyond my control, it’s just meant to be. Our first instinct was a return to Josh Capon’s top 7 Burger Conquest rated Burger and Barrel, but the Snowmageddon had kept their doors closed. We moved onto plan b, or in this case, plan DBGB.

The DBGB Kitchen & Bar is Chef Daniel Boulud’s French brasserie gone sausage filled modern tavern. The restaurant lies just above Houston St off of the Bowery. It’s an area that only less than 10 years ago was still shady, slightly dangerous and filled with squatter punks. It’s now covered in fancy high rise apartment buildings, designer clothiers, massive corporate banks and expensive hipster hotels. In fact, the only remaining element of that era is the dingy dive, Mars Bar (the only bar in NYC that has refused service to this city dweller.) But cry as you may about the ever changing city grid, it’s places like DBGB Kitchen & Bar that makes large scale city growth feel good.

DBGB is an extremely large restaurant, split into two sections, that is so well staffed, it will fee like the action is coming at you from every angle. The decor is best described as a cross between Julia Child’s wet kitchen dream and a mad scientists’ laboratory. Be sure to put on a seat belt before diving into one of the most unique beer lists in NYC. They have all the oddest beers and at very expensive prices but guaranteed you’ll be trying a great beer that you’ve never had before. It’s all balanced out by an impeccable wait service and a primarily French based menu save for an ENTIRE page of sausages with side pairings. The entire experience can be a little overwhelming but no doubt your wait person, much like ours, will almost know what you were gonna order before you do.

THE BURGER
So yes, there is an interesting list of burgers available at DBGB Kitchen & Bar but we’ll get there. We need to talk about these sausages. There is one whole page of the menu dedicated to the 14 different selections. If the beer menu wasn’t a big enough challenge for you, look at choosing sausages being 3 alligator heads to one scorpion jump in a game of Activision’s classic video game, Pitfall. Paul and I were able to narrow it down to 4.

Each one was delicious, amazing and unique in it’s own right. To pick a favorite would honestly be leading you down the wrong path. ALL of them are fantastic, succulent and worth trying. Just pick out the selection(s) that tickle your palette fancies. While you are devouring them, do NOT pass over the pairings which are just as good as the sausage selections.

Damn. I just got a sausages crave writing about them! After our “sausage party,” (go ahead, make the jokes) we moved onto the main event, we split a selection from the burger menu. THE PIGGIE –  beef patty topped with Daisy May’s bbq pulled pork jalapeno mayonnaise & boston lettuce on a cheddar bun with mustard-vinegar slaw with fries. This burger was cooked to a Webster Dictionary defining medium rare and could best be described with one word, repeated 3 times; juicy, Juicy, JUICY! Unfortunately the bun toppled under the weight of this gastronomical challenge. The dominant flavor here is the crispy and well seasoned pulled pork, so if you are craving a straight up burger, choose a different one. If you want something special and different, proceed without caution! Either way, expect a mouth maze made out of taste.

I’m not much for sweets and other than a cookie, I would normally ward someone back towered the saltiness of an extra side or app, but, at DBGBs, I highly suggest saving room for the maple pecan ice cream sandwich! It’s a brownie slice, with pecan pie filling, maple ice cream and topped in a brandy sauce. In fact, filing under the category of “ice cream sandwich” hardly does justice to this amazing after dinner treat.

You could probably get everything at DBGB Kitchen & Bar cheaper elsewhere, but you won’t be getting it with this kind of restaurant experience. 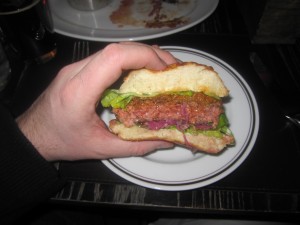 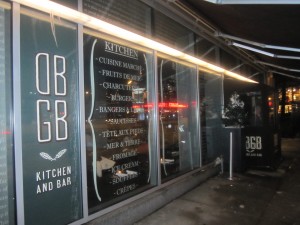 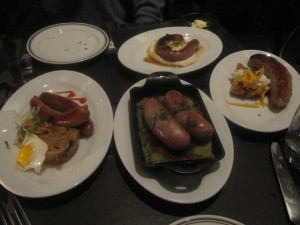 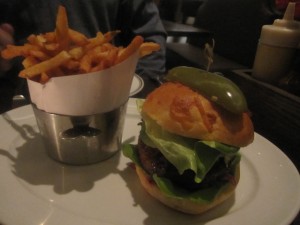 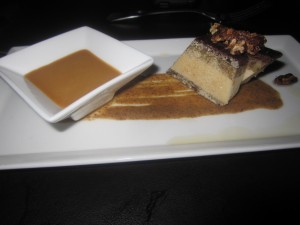 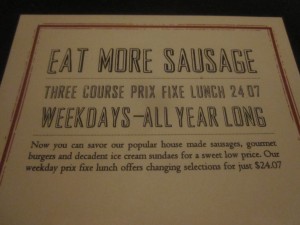 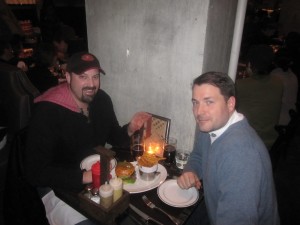 I enjoyed it so much that on the way out, I made a reservation to return 2 weeks later to eat more sausages and another burger! 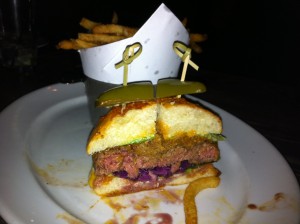 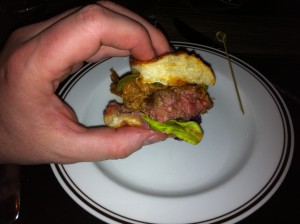