THE CONQUEST
Making friends is great. Making friends who have hook ups is an added bonus! My new buddy Mike is the guy who knows the guy. It’s great, because I am that guy too and now that we have joined forces, we are the guys who know the guys. The newest guy that Mike has been able to introduce me to is Michael Carpiniello, owner of the restaurant South Houston in SoHo NYC. Mike hit me up one day, claiming I needed to meet Michael and try their burgers. Doesn’t take much more than that for me to reply with an eloquent response such as “when?”

South Houston was created by Michael Carpiniello on the heels of Lusso, known for it’s experimental Italian cuisine. Taking his curiosity and creativity to a new level, South Houston serves up a Southern-style comfort food menu for the foodie intensive. With dishes like Vegetarian Chili that include Fennel, Squash, Parsnips and topped with Guacamole or the “His Eggcellency,” a Egg and Pepper Cheese made with finely sliced Sirloin Steak and the always popular Chicken and Waffles, the food is as intense as Michael’s passion to serve it. For fans of craft beer, South Houston offers several interesting selections, all of which are available to be taken away in Growlers. Pop a seat in in the brick walled, wooden-floored dining room that is decorated by local artists on their overly sized chalk board and get ready to be blown away.

The entire menu is prepared and created by Chef Omar Drammeh, whose story only adds to the allure of the restaurant. At age 19 Omar stowed away on a ship leaving his home of Gambia and once caught was put to work in the vessel’s kitchen. It was there that he found a passion for cooking and stayed aboard the ship for 3 years where he was eventually anointed as the head chef. From there he spent some time in London and France gaining some formal training before eventually moving to the US in 1993. Chef Omar was the executive chef at the popular Hell’s Kitchen foodie hangout, Chelsea Grill until he returned to Africa for his wedding. He and Michael eventually met at Lusso and now you can taste his Thyme Scented Grilled Pork Chop, Andouille Mac ‘n’ Cheese & Cornmeal Crusted Calamari at South Houston.

A few days prior to our “lunch date,” I actually ended up meeting Michael at the Beer, Bourbon & BBQ Festival where he too was serving food. As if I wasn’t already pretty pumped up to eat at South Houston, Michael put me in a tizzy when he told me he had some surprises in store for Mike and I. He wanted to try out a couple of potential new menu items on our palettes but wouldn’t say exactly what. Yeah baby, that’s what I call “access.”

THE BURGER
Knowing I am a beer nerd, Michael offered me a beer and without hesitation I responded with “River Horse Unfiltered Lager please!” It was a weekday lunch, so what?

Michael started us off with a bucket full of the South Houston Bacon Bourbon Popcorn. Believe it or not, the tastes here are a lot more subtle than one would expect. Michael, Omar and team believe in base food dominating the flavors of the item and in this case, the popcorn, well, it tastes like popcorn but with a light sweet and smoky accents from the toppings. It’s damn good…especially with a cold draft beer.

What happened next, well to be really honest, was hard to put into words. In fact, I’ve been thinking about this for weeks and I don’t believe the written word will do the “Bulldog” justice. So let’s start off with Michael’s description and then take it to the Burger Conquest iJumbotron for the rest.

“The Hotdog witch we’ve dubbed the Bulldog starts with the bun then gets layered with a Fried Egg, Hash Browns, American Cheese, our house-made deep Fried Hot Dog, Beef Chili, Sour Cream then everything bun and all gets wrapped in Bacon and then baked until crispy.”

The Dog itself was amazing and that’s coming from someone who likes, but doesn’t really love Hot Dogs. It’s got a great smoky and meaty flavor that comes from being made with care from real Beef. The skin South Houston is using to case the bad boy gives each bite that real snap that Dog lovers pine for. The rest of the experience, well, it was as amazing as you think it is. While eating it was a challenge, that I gladly accepted, I had to stop myself from polishing off the entire “Bulldog,” as Michael had more surprises in store.

Next up, another potential addition to the South Houston menu and the reason for the blog, a hamburger. It’s made from house blended Sirloin and Short Rib beef and topped with Maytag Blue Cheese, Pear Salad, Chicken Liver Pate and Madeira wine reduction. How the hell do they think of this stuff?!?! The patty was cooked just the way I like it, a perfect medium-rare and was ridiculously delicious. I mean, how can you possibly make a bad burger with 2 cuts of great steak? I would normally shy away from Chicken Liver Pate but I felt like the spotlight was on in front of the two Mikes. Boy am I glad I did not hesitate as arguably it was the most important part of the topping in the overall presentation of the sandwich. The Cheese, Greens and Pate create a really unique sweet and sour accent to the savory ground beef that is really unlike anything I have ever had. With all of the goodness stuck between the Bun, I expected it to give out and crumble underneath the weight. Much to my surprise, much like a great piece of NYC architecture, this bun held it’s ground throughout the entire Burger.

Kudos to Michael and Omar for the amazing food and horns up to Mike for taking me at South Houston. If and when these items make it to the official South Houston menu, I will be there and if are a Thrillist Rewards member, the word is so will you.

Last but not least; Michael, I am serious about the River Horse Lager. I will pay you $30 for the last pint in the keg!! 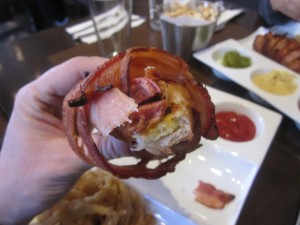 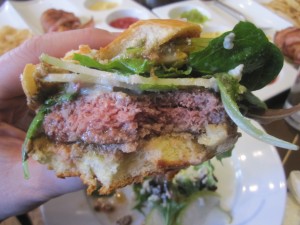 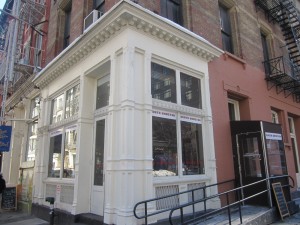 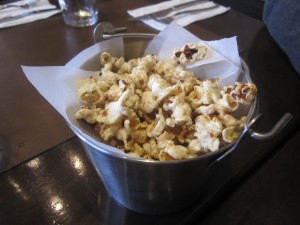 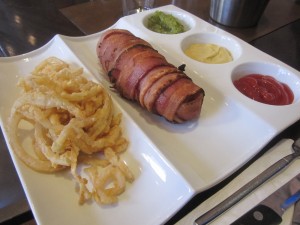 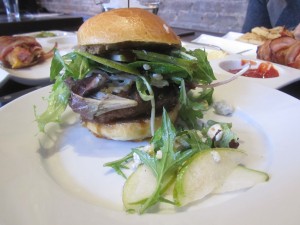 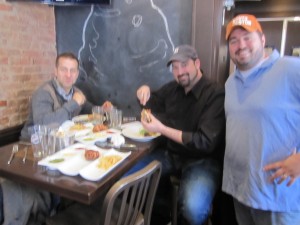