ANSWER: Every single one of us are name checked in this book: 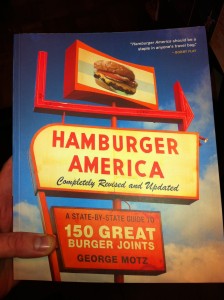 In fact, here I am, right here on page 367 with other members the Burgeratti… 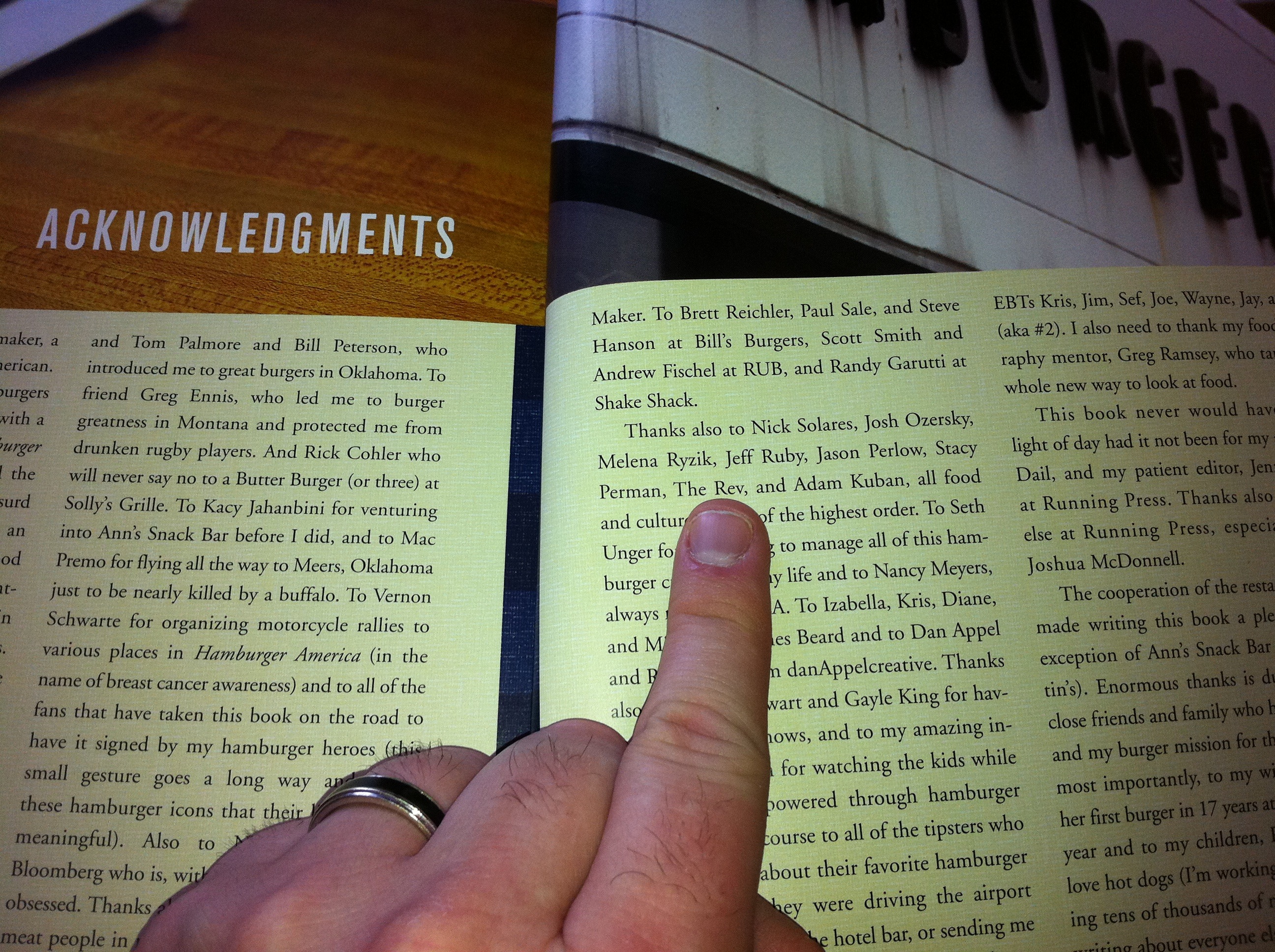 When I stumbled into my apartment after a fantastic Learning to Beer and Bourbon event at Idle Hands with Sierra Nevada and Michters, I was greeted with the arrival of a long awaited package. “Hamburger America,” the greatest book ever written about the greatest food item ever, written by the greatest Burger lover ever, George Motz, has been “Completely Revised and Updated.” The original edition of the book featured 100 stories, reviews and photos of some of the most important Burgers that make this great country as great as it is. It is a veritable bible of quality Hamburgers that can be used as a historically based road map for those of us on a Glorious Pursuit of Delicious Burgers.

I met George in October of 2009 as he invited me out to have a Burger at Schnipper’s Quality Kitchen, which later was added to my list of The Best Burgers in NYC. George is always smiling, always laughing. always excited to eat and or talk about Burgers and is the man behind The NYC Food Film Festival. It’s a week long event based around George’s passion for film and food. It’s a fantastic series of events and when they announce the line up for 2011, you best jump to get tickets.

I love George, his book, his film and his festival and moreover, I love being include in a list of some of the most influential Burger fanatics in the world. It’s a pleasure, an honor and a complete surprise to find my name in his book. I’m marking today down as a significant Burger Famous moment in the history of my life; “The Day The Rev made it into print for eating Burgers.”

Thanks George! UDAMAN! I can’t wait to experience the Hamburger Smartphone application and join you in celebrating not only the release of it and your book but also National Hamburger Month. Official information below.

“When you travel across the United States take this guide along with you.” — Martha Stewart

To celebrate National Hamburger Month (May 2011), George Motz is releasing the 2nd Edition of the book Hamburger America and the 1st-ever Hamburger America Mobile App.
The App:
Hamburger America Mobile by George Motz
As soon as George began his travels to research the greatest hamburgers of America, friends, family and industry folk alike began to text message him constantly with notes like, “In Austin…Where find burger?”.  Motz would graciously respond with info from his burger brain file cabinet and direct people to the place closest to them.  It was when he started receiving multiple requests a day, that the idea for the Hamburger America Mobile App was born.  The app leads users to the best George Motz-approved burgers around the country.
Every burger joint in the app has officially been tasted and approved by Motz, who has included detailed information in every listing…such as exactly how to order the burger, what to drink with it or all kinds of insider information about even the most out-of-the-way joints.  Unlike other food-related mobile apps, Hamburger America Mobile is expert-sourced. The information comes directly from America’s hamburger expert, rather than crowd-sourced throwaways. It’s not simply a bucket of reviews by random people. It’s insight from the guy who’s eaten over 10,000 burgers!
The Book
George Motz’ Hamburger America:
A State-by-State Guide to 150 Great Burger Joints Completely Revised and Updated!
America’s hamburger expert, George Motz, returns with a completely updated edition of Hamburger America, now with 150 establishments where readers can find the best burgers in the country. Motz has made it his personal mission to preserve America’s hamburger heritage, and his travelogue spotlights the nation’s best roadside stands, nostalgic diners, mom-n-pop shops, and college town favorites–all with George’s photographs and commentary throughout. Whether you’re an armchair traveler, a serious connoisseur, or curious adventurer, Hamburger America is an essential resource for reclaiming this precious slice of Americana.
Book Reviews
Michael R. Bloomberg, Mayor, New York City – “Just looking at this book makes me hungry, and reading George’s stories will take you on the ultimate American road trip.”
David Page, Creator, Diners, Drive-Ins and Dives – “George Motz is the Indiana Jones of hamburger archeology.”
Worldwide Launch Event
The official worldwide launch event for the Hamburger America book and mobile app will take place on Friday, May 20th, 2011 in New York City at the Apple Store in the Meat Market. George Motz will show clips from his films, read from the book demo the app and then sneak out to a secret burger party at an undisclosed location.

About George Motz
Since the publication of the first edition of Hamburger America, and the film of the same name, George Motz has become America’s foremost hamburger expert. He has taught a hamburger course at New York University and has consulted for many restaurants. In 2006, “Hamburger America” (the film) became required viewing for a food course at Princeton University and was nominated for a James Beard Award. In 2007, George created the Food Film Festival series, where guests taste what they see on the screen and has since, served 20,000+ hungry guests in New York City and Chicago. In addition to his ongoing work as a Director of Photography, writer and photographer, George continues to travel the country in search of interesting hamburgers and the stories behind them.  His Hamburger America Mobile App will be released in May 2011 and is expected to be required downloading for foodies and road trippers nationwide. George lives in Brooklyn with his wife and two kids.
About The Film
Hamburger America is a documentary film that tells the story of eight deliciously unique hamburger joints across the country and the people behind the burgers. Each restaurant featured in the film has been around for more than forty years, uses only fresh meat, and in many cases can boast the fact that ownership has stayed within the same family. Not only is each establishment family run, but their booths, counters, and stools have seen families come together and grow over the years. The tenets of tradition, family, and pride are what make Hamburger America a truly American tale.  The film is now available on DVD from Amazon.com and will soon be included in the Deluxe Version of the Hamburger America Mobile App.
The Hamburger America Mobile App Features…
– GPS-Based directions to burger joints nationwide from your location
– George Motz’s personal menu suggestions
– Detailed information about each burger joint, such as who to talk to, where to sit and what NOT to ask for
– Hundreds of original photographs from Motz’s personal Hamburger Photo Archive
– An in-app diary to note user Favorites, Upcoming Dining Plans and Restaurants Visited
– A live feed from Motz’s Hamburger America Blog
– Full set of social media links to share findings with friends
– The original full length cut of the film Hamburger America (Deluxe Version Only)
– Deals and coupons for discounts/specials at select burger joints (Deluxe Version Only)