THE CONQUEST
One of the best parts about living in NYC is all the great food options we have here. You name the food item or ethnicity and we have it, probably 10 times over, 10 different ways and in every neighborhood. One would think that diversified eating is a primary function of New Yorkers, and you’d be correct. We love our food here and we love it every possible way we can get. That’s why when when the Feast of San Gennaro comes around, the entire city becomes focus on Mulberry St between Houston and Canal.

2011 marks the 85th celebration of the annual Feast of San Gennaro in Little Italy, “New York City’s longest-running, biggest and most revered religious outdoor festival in the United States.” The festival takes over the length of Mott street which for years and years has served as the Italian cultural center of the city. Immigrants first arriving into the states from Italy since the turn of the century made this area of Manhattan their home. Even though much of the area has shrunk, the few blocks still house Italian eateries, bakeries and shops. It’s more of a tourist destination these days but for 11 days in September, the not for profit organization known as “Figli di San Gennaro” (Children of San Gennaro), puts together an event that draws around 1 million visitors.

The Feast is filled with parades, games, shops, entertainment and of course more Italian inspired food than one could possibly hope to eat. All the NYC street fare can be found like Sausage and Pepper Sandwiches, Clams Casino, Zeppoles, Bracciole and Cannolis among many other dishes. Having lived here since 1996, attending San Gennaro is a tradition I don’t take lightly. However, having eaten the same thing, year after year, and still loving it, I always look forward to what specialties pop up each year. As Little Italy is having a bit of a renaissance with restaurants like Torrisi, Falai & Rubirosa the city’s interest in New School takes on Italian classics grows. I for one, could not wait for the feast to return so that I could get my mangia-mangia on.

THE BYGGYBEEF
The talk of the festival this year was a sandwich that was decidedly un-Italian yet unmistakable. The sandwich, named “Byggybeef” was housed in a booth right outside of Torrisi that was shared with The Breslin. This dubious sandwich is the brainchild Dewey Dufresne, a 1970s sandwich master from Providence. Here in NYC, his son Wylie is a bit more familiar to us eaters as the Chef from wd~50. Dewey is in the works of opening a new-school sandwich shop some where in 2012 known as “BYGGYZ.” His booth at San Gennaro was meant to be a bit of test run and after NY Mag posted their “Deconstructing Dewey Dufresne” story, the buzz hit us eaters right in the hungry spot. 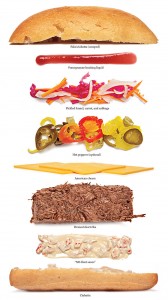 Click photo to enlarge. Be sure to check out the full story on NY Mag where the image is from. One read of it and you’ll understand what all the Buzz or BYZZ is about.

My first two attempts to get the Byggybeef sandwich ended in failure as it was closed both times. This only worked to build up more anticipation but the third time, well that was a charm. The sandwich is starts with a hollowed out Ciabatta from Falai. It is filled with braised Short Ribs, formed into a brick with Pomegranate Braising Liquid, Pickled Fennel, Carrot & Cabbage, Hot Peppers, American Cheese and something called “XO-llent Sauce” made from Mayo, Mustard & Sweet Peppers.) Although only about 6 inches in length, it is not to be taken lightly. The sandwich hits on all your flavor receptors with an amazing mix of sweet (Peppers, Liquid, Sauce) and savory (Cheese and Beef) tastes. In fact, the balance is almost uncanny. The Short Ribs are juicy and almost greasy but certainly not in a bad way. It’s just divine in it’s preparation. Done the right way, this would make for an amazing Hamburger. However, that’s not what it’s meant to be.

Congrats to Dewey Dufresne, because of the the Byggybeef Sandwich, a new level of Cheesesteak has been achieved!! Hopefully you didn’t miss out because I guarantee there will be a line out the door when BYGGYZ finally opens. 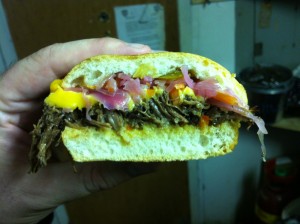 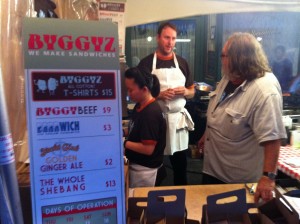 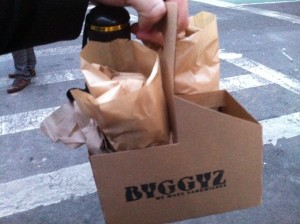 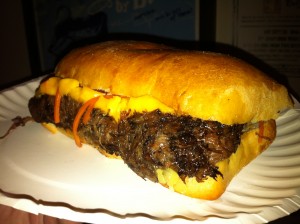 Although the Byggyzbeef Sndwich wasn’t available on the first night I attended San Gennaro, that didn’t stop me from eating my way around the Feast. Here are some of the other tasty Italian Alimenti. 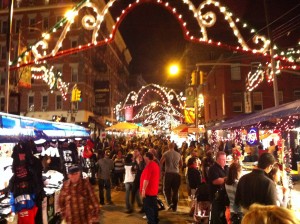 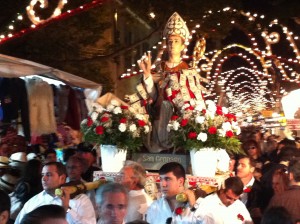 The Braciole with fresh Bitter Greens, Shaved Parmigiana & Red Sauce on a Potato Roll from Rubirosa was utterly fantastic. 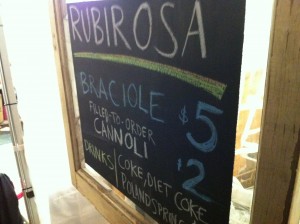 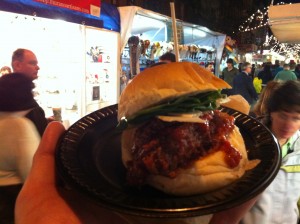 I don’t care if they’re stamped out on an assembly line and they come frozen, there is NOTHING like a Mozzarepa at a street fair. It’s a sandwich made of two grilled Sweet Corn Cakes with a slice of melted Mozzarella in the middle. 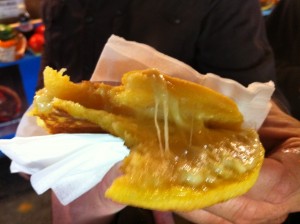 One booth that was undeniable at the Feast of San Gennaro was that of Brooklyn Bangers. My friends and I stopped dead in our tracks when we read the words “Beef Brisket Hot Dog.” Could it even be possible that something as simple as a Hot Dog could be made from and taste like Beef Brisket. Until this very moment, I had never even considered the idea but thanks to Brooklyn Bangers, the answer is a unbelievable YES. After walking all the way down to the end of the fest and abck, something called me back to the Brooklyn Bangers booth for what became my favorite sandwich of the night, Brooklyn Banger’s Meatball Parm Sandwich served with Peppers on bread from Parisi. 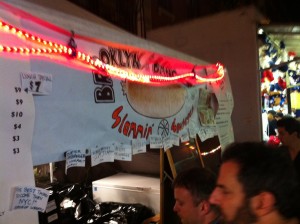 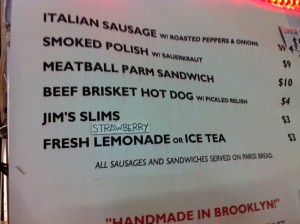 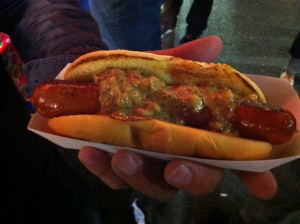 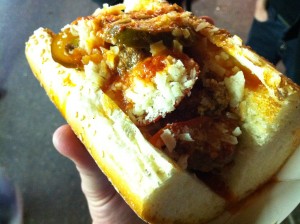 Attending San Gennaro and not getting a staple dish of the Feast is a huge no-no. Whether it’s a Steak Sandwich on Garlic Bread, Pasta, Pizza, Meatballs or anything else, it’s an absolute must. For me, this year’s traditional dish du choice was a simple Rice Ball covered in Vodka Sauce. AWESOME. 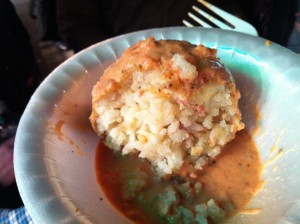 1 Response to Byggybeef – Putting The Feast In San Gennaro