THE CONQUEST
Sometimes you just want a good Burger! Truer words are rarely spoken and if there is one thing I can appreciate, besides said good Burger, it’s the truth. Thankfully for me and the rest of the Burger eating society of New York, CrossBar also likes to speak the truth. When they tweeted at me the opening sentence to this post, they immediate drew my attention especially when they followed it up with “Stop in to try our Burger Royale: testa, Taylor ham, & fried egg!” When I worked at McDonald’s back in High School, we called this suggestive selling. I wonder if Todd English worked at McDonald’s too?

New York is a crazy town with a crazy history and a lot of crazy people. For those who have been here long enough to remember the Limelight, they know it as a crazy, if not the craziest of night clubs. On my very firs trip ever to NYC, way back in 1994, I had my first experience there at a show with Marilyn Manson, Stabbing Westward & Die Krupps. My poor Midwestern heart thought I stepped into Hell’s concert venue and I’ve never been the same since.

Housed in a former Episcopal Church, the Limelight was known for all levels of debauchery and mayhem … but those days are long since gone. In 2010 the Limelight re-opened as the Limelight Marketplace with 35 high-end boutique shops and restaurants. Among them you will find CrossBar. It’s a 2-story restaurant on the 20th Street side of the building with beautiful street side patio and a modern Gothic looking dining room made from salvaged wood from old churches, barns and schools. It’s the creation of super celebrity chef extraordinaire and James Beard award winner, Todd English. After publishing many acclaimed cook books, hosting the TV show “Food Trip with Todd English” on PBS, Todd has opened 20 restaurants around the country. CrossBar has a very uber-hip and cool feel while serving a small yet focused farm-to-table comfort food fare with an intense focus on the hog.  You’ll find all parts pig including Bacon Jam, Crispy Pork Belly, Cubano Sandwich, Pulled Pork Tacos and more. Wash it all down with an interesting selection of Craft Beers, Wines, Bourbons, Scotches & Whiskeys.

THE BURGER
CrossBar’s Burger Royale comes topped with Testa, Taylor Ham, Fried Egg and Spiked Ketchup with an order of French Fries on the side. Ask me what my favorite topping on a Burger is and I’ll without a doubt answer Fried Egg. Just about any Fried Egg will do but the best kind is cooked over medium and upon tooth impact, has a runny yolk that explodes all over the sandwich. The Burger Royale Egg, is just as such! It’s all served between a soft yet sturdy Onion Roll which holds up extremely well on what could be a very messy Burger. The Patty was cooked to a picture perfect medium rare with a nice charred flavor on the outside. The juicy insides placed nice with the smoky and salty tasting Bacon and Taylor Ham. Honestly, this burger would still be good without the breakfast toppings or do I mean this breakfast sandwich would still be good without the burger?!? Probably both. 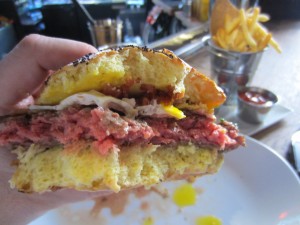 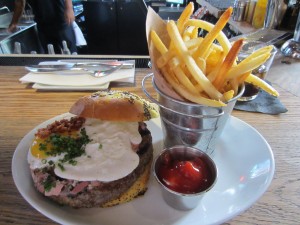 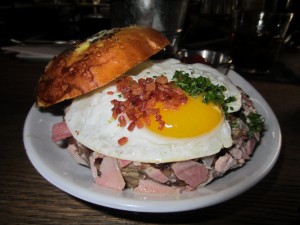 CrossBar scores a 5 on The Rev Meter.