Schnipper’s Quality Kitchen 2.0 – Off-Menu Burgers In The Heat of A Burger Row Battle

THE CONQUEST
When it comes to Burgers, I say gimme more. It’s like term used by women who are involved in long deep satisfying sex sessions but with probably a little less “OOOH” and a little more “YUMMM.” You can never have too much of a good thing, especially Glorious Hamburgers, especially here in NYC. When Andrew and Jonathan Schnipper told me they were opening a second Quality Kitchen location, you bet I was stoked! The brother’s Schnipper can claim one of the best Burgers in NYC and now you can get it in midtown or in the Flatiron District right on 23rd St, AKA “Burger Row.”

That’s right! While the Shake Shack has been busy off opening locations all over NYC, D.C., Connecticut, Florida and even the Middle Freakin’ East, little did they know, Schnipper’s Quality Kitchen was setting up right in their front yard. Sick of the long lines at the Shack, no worries, there’s awesome Burgers across the street. In fact, in a move not unlike the territorial battle of ancient peoples, some of the first customers at today’s opening were all from the Shake Shack coming in for scalping of their oncoming attackers.

OK. That’s probably a little dramatic and as ensured to me by Jonathan Schnipper himself, the decision to move onto Burger row had everything to do with a great deal, a great location and a love of Burgers. If you wanna get really serious, Schnipper’s Quality Kitchen shares 23rd with 2 New York Burger Co locations, Rub BBQ, Lucky’s Famous, the Trailer Park Lounge, Fresh & Fast as well as the Shake Shack so clearly, there is something Burgerriffic about the street.

But aside of all of that, the new Schnipper’s comes with an all new lay out that has more of a homey feel. It’s even complete with seats right on the kitchen line where you can watch all the delicious food being made. 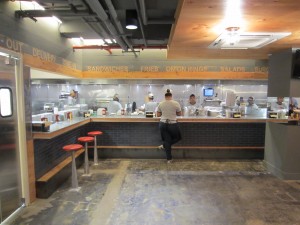 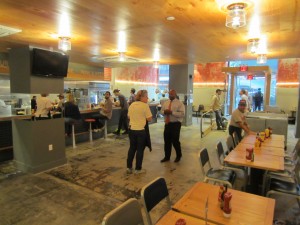 The menu is relatively the same with a few exceptions. The Burgers are only 4 oz (instead of 5.5 oz Patties at the Midtown location) with a drop in price. You can also now order double patties if you want to get all stackified. The Mac N Cheese here is more a home baked style and there are no tacos on the menu. There is one new Burger on the menu at the Burger Row location that you won’t find across from the Port Authority; A Green Chile Cheese Turkey Burger on Whole Wheat. I asked why here and Jonathan told me it’s the most popular Burger with the staff.

With that, along with some of my Thrillist Rewards homies, I had to try it.

THE BURGER
I won’t go into a long dissertation on the selections at Schnipper’s. For that, you can read any of these:

But, let’s talk about this new addition to the menu, the Green Chile Cheese Turkey Burger on Whole Wheat. The Patty itself is a house ground blend of white and dark Meat, the percentages of which Jonathan would not reveal. It’s topped with Scnipper’s famed Green Chile’s, Cheese and served on a Whole Wheat Bun. Much like their Beef Green Chile Cheeseburger, which is the BEST of it’s kind in NYC, Schnipper’s can now claim the same for their Turkey Burger. On top of that, this is far and above the juiciest Turkey Burger I have ever had the pleasure of taking down. As Turkey needs to be cooked well-done, most restaurants end up over cooking it until it’s dry and flavorless. The Schnipp’s stay true to the word “Quality,” this Burger is worth the trip alone. 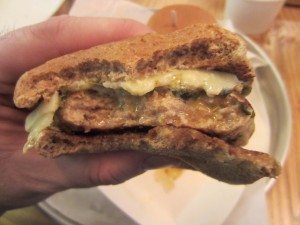 The temptation of a Schnipper’s Classic was too strong to resist and also had to face me in a battle of hunger. FYI – the Burger lost but in this game, everyone is a winner. With the special blend of Schnipper’s Cheese, Greens & some unbelievably tasty Bacon, there’s a reason this one is so popular. 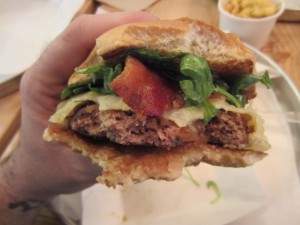 Just as my stomach was hitting the breaking point from Two Burgers, Baked Mac N Cheese, Onion Rings and Sweet Potato Fries with Maple Dipping Sauce the Schnipper’s team pulled out a little surprise. After all the talk of Meat sourcing, blends, cooking temperatures and toppings, we started to discuss the Schnipper’s menu options of the upcoming Blue Moon Burger Bash at the NYC Food & Wine Festival. They asked me if I thought they should serve the Beef or Turkey version of their Green Chile Burger. I asked “how about both?” To which the reply was “you mean in one Patty?” My eyes lit up. “I don’t know but that sounds kind of crazy!” I stammered. “Well, let’s find out. If we make you a Turkey / Beef combo Burger will you try it and tell us?” DUHHHHHH OF COURSE I WILL!

A few minutes later they emerged with an off-menu Green Chile “Turkeef” Cheese Burger on Whole Wheat. J-Z, Dean and I looked at each other, shrugged our shoulders and started to chow down. Knowing that Turkey has to be cooked more than Beef, the kitchen staff stuffed the Beef into the Turkey. While the Turkey cooked to full, the Beef in the center heated up just enough. Man oh man oh MAN! This Burger was AWESOME!! Cooked absolutely perfectly, this Frankenstein Concoction allowed for the outstanding flavor in each Meat to have it’s own flavor space on my tongue. I freakin’ loved it!! I told the Schnipper’s that I think they could’ve served this on White, with just one Slice of Cheddar and some Schnipper’s sauce and while they agreed, I wouldn’t expect to see this on the menu anytime soon.

Pop yourself into the new Schnipper’s Quality Kitchen on 23rd, say hi to Jonathan and Andrew, tell em’ Rev from Burger Conquest and enjoy some of the best damn Burgers in town. 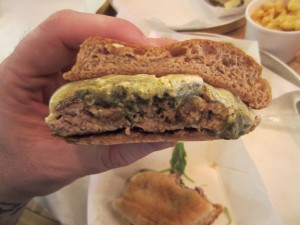 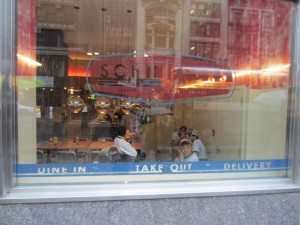 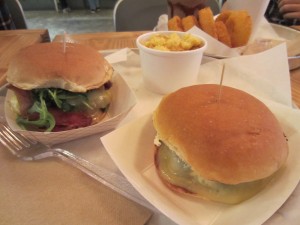 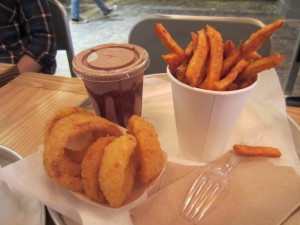 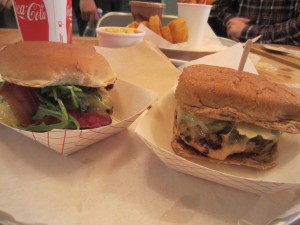 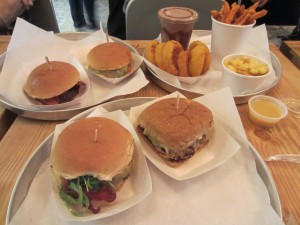 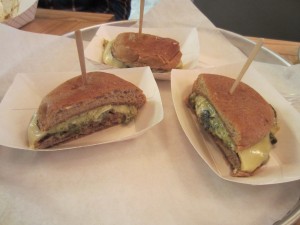 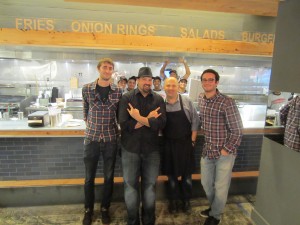 1 Response to Schnipper’s Quality Kitchen 2.0 – Off-Menu Burgers In The Heat of A Burger Row Battle