When you hear the words “Sausage fest” normally visions of a bunch of Beered up frat dudes having a party with a serious lack of female participants. Or maybe more directly, it’s miles and miles of low grade street Sausages served on old crusty Buns to a bunch of people swilling back malted beverages with no concern for quality, only a Romanesque Dionysian need to consume. But not if your New York City’s Tour De France Restaurant Group.

To this crafty crew of French themed restaurants, the annual Sausage and Beer Festival means so much more. This annual event is a chance for each of their Chefs to flex their meaty wings by creating their own artisan Sausages that are then paired with fine craft Beers. Prior to 2011, the Tour De France “Sausages and Beer Festival” took place in each of their partnered restaurants. 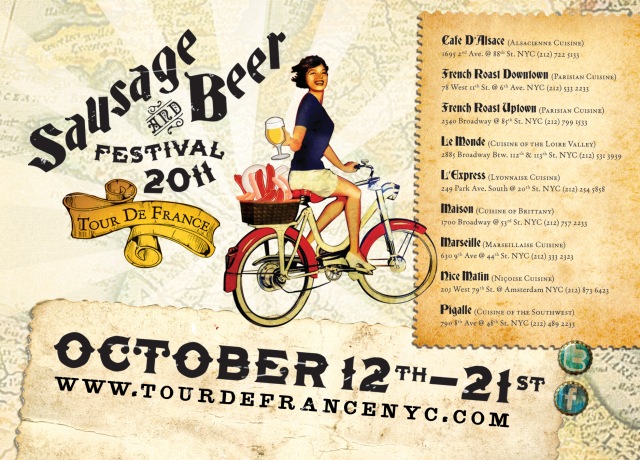 But this year they took a step out of their home kitchens and into the beautiful and elegant 404 Event space to present a gourmet tasting of their talents. The restaurant grouped paired up with the Duvel Moortgat USA family and Thrillist Rewards for an epic tasting event. 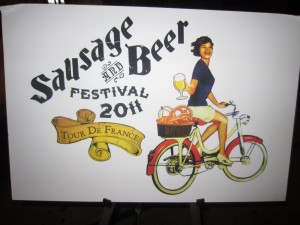 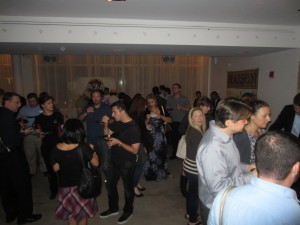 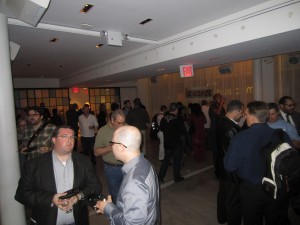 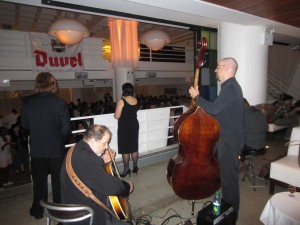 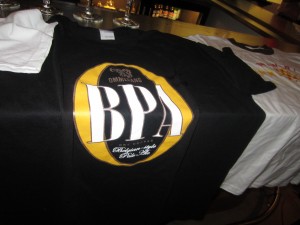 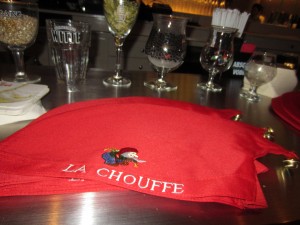 The sweetness of the of the reduction on the Sausage against the pungent cheese and bitter greens were paired with the bitter sweet maltiness of the Mardesous to create a very rich match. 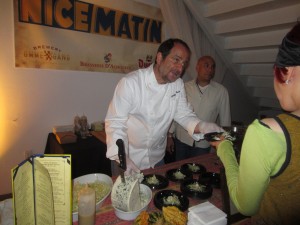 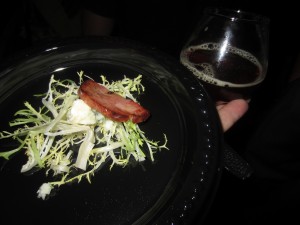 The lighter, sweeter Sausage dish was delicious and of all that I tasted, allowed the Beer to actually dominate the pairing. Duvel Single is a lighter yet still bitter version of it’s self and I love that the Chef pulled back on the dish to match the delicate Beer. 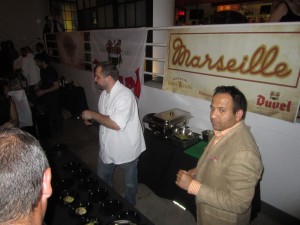 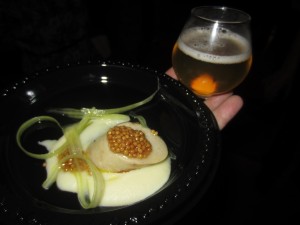 Wow. Seriously, if they are serving this in the restaurant, RUN, do NOT walk and get one before it’s gone. The smoky Sausage, served on a sweeter bed of Semolina was taken up a notch by the floral smelling and refreshing French Farmhouse style beer. 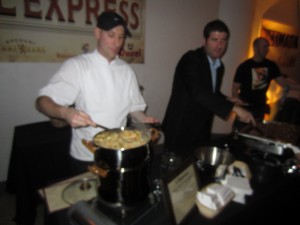 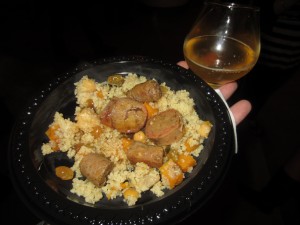 Three Philosophers from Ommegang is a no joke, Quadruple Beer that has deep tasting and dark qualities to it’s also fruit and almost chocolatey profile. Due to it’s complexity, it’s a Sommelier’s pairing dream but that certainly doesn’t make for an easy task. This dish could easily be described as Pork Belly in a light flaky Pastry but is so much more intense without being overpowering to the palette. 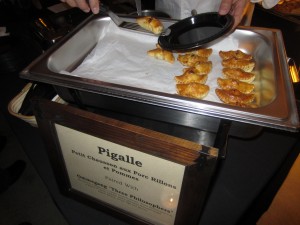 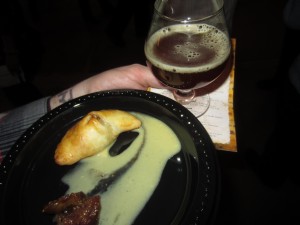 Admittedly, I can’t stand Seafood but was told this Sausage was one of the most unique and favored dishes of the evening. While I didn’t try the food, I definitely took the chance to sip on a delicious, fruity and spicy Belgian White Beer. 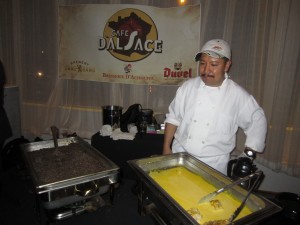 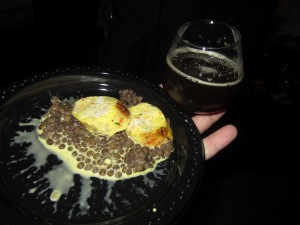 Oh man! I love and I mean LOVE Ommegang BPA. This beer, made with the coveted Cascade hop is one of the most amazing and well balanced and hoppy Belgian style Beers made in America. It’s made with a perfect balance of respect to the old ways but with just enough American ingenuity to set it aside from the rest. Having said that, I couldn’t wait to try it’s paired Sausage. The Pheasant was an interesting, and bold, departure from the rest of the offerings. I’d normally shy away from anything Celery based but the Chef truly stepped into some magic by adding a Blackberry Sauce to the Fowl. 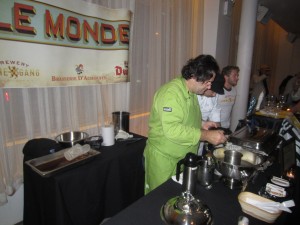 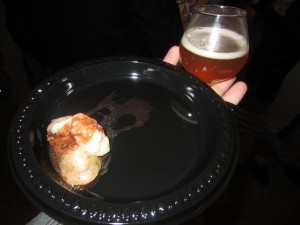 Ommegang’s Abbey Ale is a tribute to a Trappist Belgian monk brewing tradition. It was once meant to serve as a Bread and has just such a hearty flavor. But we aren’t talking White Wonder Bread, this bread can taste like cloves, caramel, figs and other dark, salted tastes. It’s a fantastic beer and when I saw it was paired with my favorite thing in the entire world to eat, Venison, I was ecstatic. I’m glad to say that the Sausage and Beer pairing lived up to my excitement and is one of the only offerings I went back to and had a second time. If this is available at either location, I STRONGLY suggest you go eat it before the festival is over on October 30th. 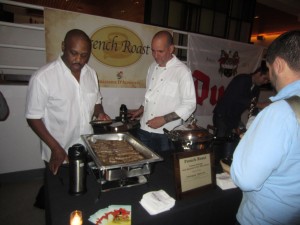 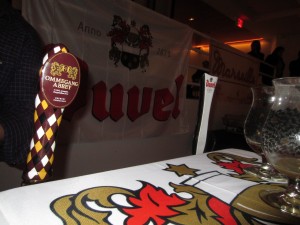 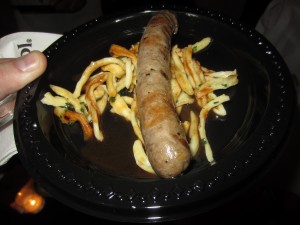 You know what’s great about Cassoulet? Everything. However, the word “great” would do little justice to this unbelievable dish and this astounding Beer. As for Beligan Breweries, Brasserie d’Achouffe is the BEST one of all of them. They believe in Beer Gnomes and if that isn’t enough reason for you to try it, hopefully my testimonial will. Mc Chouffe is Malty, raisiny, coffee tasting Scottish style Ale and it is magical, like a Beer Gnome. As for Duck Confit Sausage, well I would like to meet the Chef who is just crazy enough to try such a bold move in his kitchen.

Holy Moses, this was the BEST Sausage of the night with the most savory and complex of all flavors yet delicately well balance on a bed of one of the world’s most acclaimed dishes. Seriously, if they are serving this for the rest of the festival, I am moving into the restaurant with an air mattress, my computer and my phone. I’ll be there until it’s no longer on the menu…I hope that doesn’t make them think twice!! 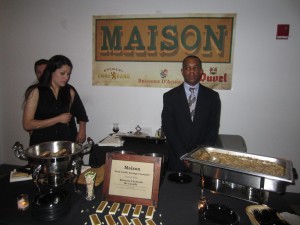 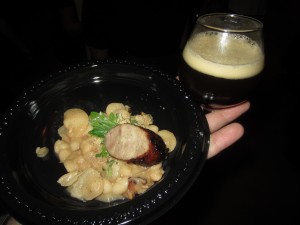 I didn’t get to try the dish because I was having too much fun tasting off and unique beers with the fantastic folks from Duvel Moortgat and Gianni, the Beer Sommelier from Cafe D’Alsace who also chose all the pairings for the event. This was one of the most fun, tasty, thought out, delicious, unique and well dressed food events I have ever been to in NYC. All of these restaurants are worth checking out and for sure, like the Tour De France on Facebook so you don’t miss any of their other Food Festivals!

I’d also suggest you sign up for Thrillist Rewards because you can trust them to bring you great and exclusive events like this. 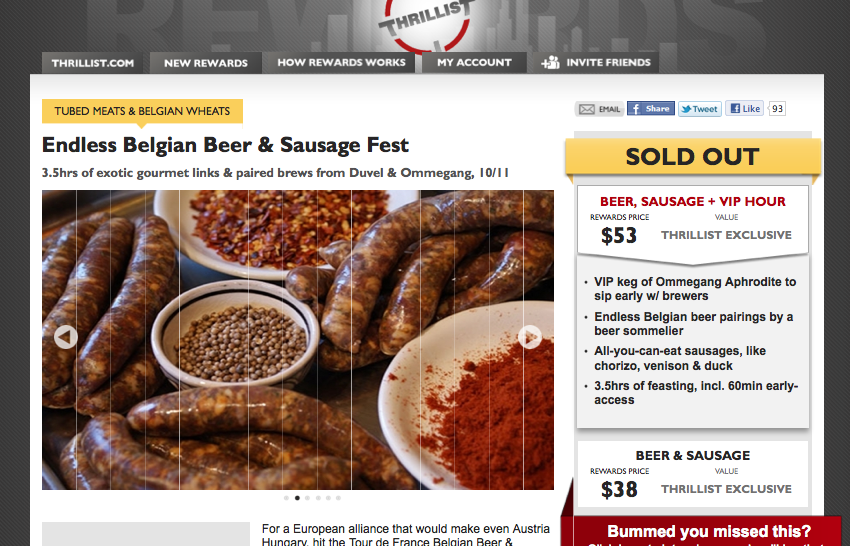 Now I know this had nothing to do with Burgers and normally I would not go off topic but this is something you need to know about!