Chicago Food Film Fest – How Many Times Can I Say Amazing?

George Motz, the man behind the burger bible “Hamburger America,” and film of the same name, along with Harry Hawk, are the co-creators of the NYC & Chicago Food Film Festival. This multi-day event combines their mutual love of food and film to create a unique twist to the standard film festival. According to them; “Through documentaries, features and short films, the Festival showcases the best, and the most memorable, of the world’s favorite foods. Along with a heaping helping of mouth-watering films, Motz, Hawk and company serve up the food that guests are watching on the screen for a multi-sensory, full-bodied experience.” The motto of the festival, “taste what you see on the screen!” 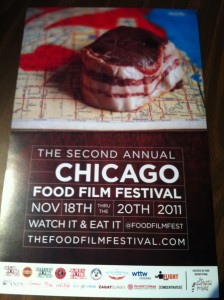 Some people asked me; “Rev, why in the hell would you fly all the way to Chicago on your own dime and on your own time to work for an entire weekend?” Well my friends, read on and you’ll understand. First of all, understand there is nothing like the Food Film Festival.

In all my years of the event business I have never seen, or tasted, anything like this. It’s an all out, 3-day food, film and drink adventure like the world has ever seen. If you’ve ever been described as a “foodie,” “food fan,” “food aficionado,” “food connector,” “taster,” “Gourmand,” or just an “eater” or “drinker,” you need to experience the Food Film Fest.

HOW IT WORKS:
It starts with talented filmmakers around the globe who not only have a passion for food but also for film making. They combine them together and create something like Joe York did about the Cruze Dairy Farm and you create, “Buttermilk: It Can Help.”

Then you submit it to the festival for consideration. If it make it into the festival, it’s entered into competition and shown. Then, if it can be done, whatever food is shown in the movie, is served during the screening. 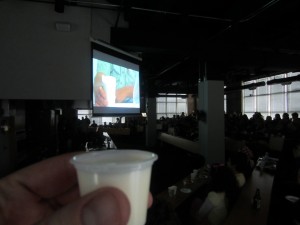 In the case of Joe York’s “Buttermilk: It Can Help,” you get voted the “Audience Choice” winner and are awarded the festival’s “slotted spoon,” to commemorate the victory.

For more about the festival itself, please point your browser to my review of the 2011 NYC Food Film Festival. Once you’ve done that, come back here and see what craziness took place in Chicago.

Get it? With plastic compostable fork in hand (or pocket when in not in use) I set out on a 3 day gratuitous, pornographic, edible adventure that could only be brought to you by the craziest, friendliest, most creative and HUNGRY group of people I have ever met. 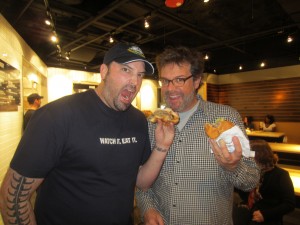 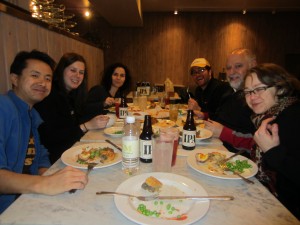 It started Thursday night with a pre-festival breaking of the Burger at Kuma’s Corner. From there it was off to bed as we had a long weekend ahead of us. The first day of the festival, Friday, was spent doing A LOT of set up. It was our first full day at Kendall College and with less than a dozen people on the official staff (myself included) serving food and films to 1000 people is no easy task. Fueled by awesome catering from Chipotle, we got everything in order. For me that included getting laminates made, picking up event lights & cables, making a run to Home Depot to get concrete sheets, blocks and wheel barrow and setting up multiple sponsor & food stations.

But most importantly, as the festival’s Director of Adult Libations and official Beer Sommelier, I had to get an amazing array of craft beer from Lagunitas, Two Brothers, Stone, Vanberg & DeWulf & Anderson Valley up 5 flights, cold and ready to satiate the masses. 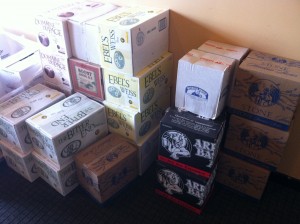 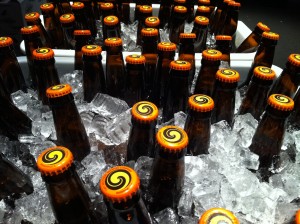 Friday night came and we were ready to kick off with one of our signature events; Farm To Film To Table.

A number of films themed on locally sourced, grown, created and cared for foods are bundled together along with, where possible, foods show in the film. In this case Art Jackson and the crew from the amazing Pleasant House Bakery prepared a number of unbelievable dishes featured in the films or available at the restaurant itself. After the screenings, we moved the entire festival down to the Kendall College ballroom for a A Pig Pickin’ & Whiskey Bar Party presented by Flight Chicago. What this mean was two entire hogs, that roasted all day, were placed out on tables buffet style and guests lined up to pick whatever meat they wanted from whichever part of the pig they wanted. It was all washed down by some whiskey and of course, some awesome craft beer. 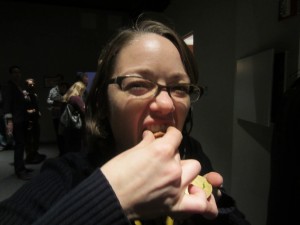 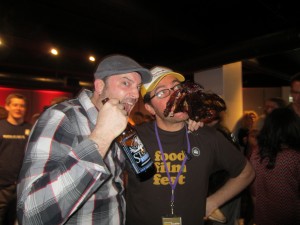 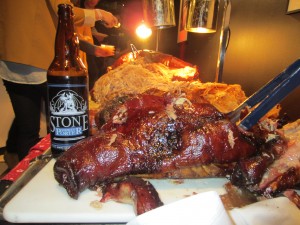 It took until the wee hours of the morn to get Kendall College picked up, clean and ready for Saturday. Exhausted but excited, we turned in for the night in an attempt to steal away a few hours of sleep because we had a BIG Saturday in front of us.

Day 2 brought us another, and very, very excitement, signature event from the Food Film Fest, the Edible Adventure. The basic premise is that we either bring you food you can’t get in your town or in the case of this year’s fest, we bring you to a place you aren’t allowed in or are supposed to be eating at! Welcome to Edible Adventure #004: The Doughnut Vault Brunch

We took our entire operation and built a restaurant and movie theater right inside the docks of the Intelligentsia Coffee Roasting factory!! The event sold out in mere moments because people in the know, knew this was going to be a ridiculously unique opportunity. We showed a movie about coffee roasting and about Intelligentsia while people sipped their choice of Intelligentsia coffee. We screened a movie about a love for Doughnuts, followed by a movie about the ever popular Chicago Doughnut Vault while attendees ate Doughnuts from you guess where, the Doughnut Vault. Also served; a selection of Cheese from Jarlsberg, Apple Crisps from the charity benefactors of the festival, the Good Food Project, Wines from Europe, Pere Jacques & Matlida Beers from Goose Island and yours truly poured glass after glass after glass of fresh made Carrot-Apple juice. 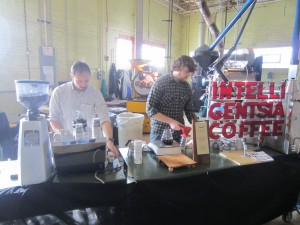 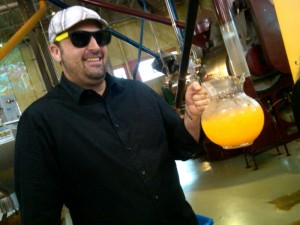 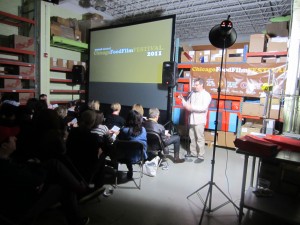 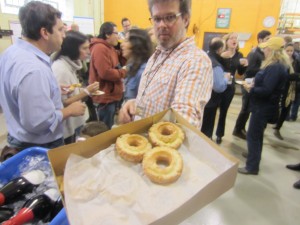 After watching a bunch of gratuitously pornographic (the funnest of ways) food films and eating the food featured in them the party moved downstairs where the insanity continued. George, being the food fanatic that he is made a movie called “The Mud and the Blood,” about his family from Lowcountry South Carolina. This food porn shows George’s family picking Oysters from a private water way and then having a proper Lowcountry Oyster Roast. It’s entirely a passion process with no commercial output, just something you do for family and friends. This festival inspires people to do crazy stuff and case in point, George’s family, lead by his Uncle Bubsy, harvested 40 bushels of Oysters, put them into a truck along with several cases of Palmetto Beer and drove them nearly 1000 miles to Chicago. Why? Because that is what the Food Film Fest does.

Using hand made Oyster Roasters we had to have constructed just for the festival, Uncle Bubsy and crew essentially lit the Chicago sidewalk on fire and cooked the entire truck load of Oysters! Not ones to half-ass it, the festival also provided not only proper shucking knives but also shucking tables, hot sauce and Boiled Peanuts! It was a food frenzy! I watched people in attendance shuck their way and eat through 5-6 dozen Oysters each, washing them down, of course, with awesome craft beers.

Once the madness had died down, there was one table empty, way in the back of the outdoor tent. Artie S. Unger CPA, one of the executive staff members of the fest, gathered up the rest of our team and George’s family for our very own shuck off. In all my years hosting the NYC Wing-Off, as a founding member of the world’s #1 Steak Club, SteakClub7 or in my entire Glorious Pursuit of Delicious Burgers via Burger Conquest, I have NEVER seen a food frenzy like the hurtin’ these people put on the roasted Oysters! Even me, a notorious hater of all things Seafood, had to get in on the action! However, after one Oyster, I remember that I don’t like them and continued on with Boiled Peanuts and Craft Beer. It was an amazing evening. 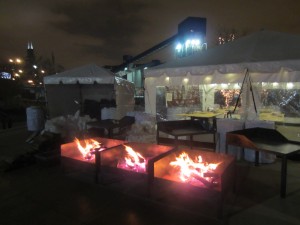 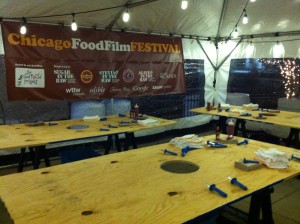 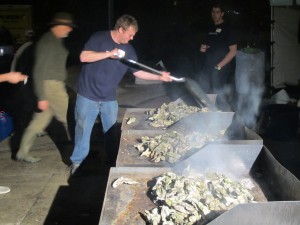 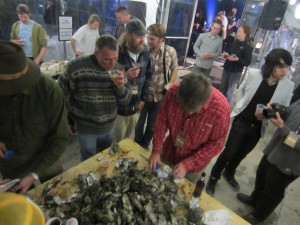 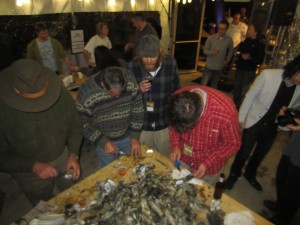 Sunday morning came quickly and everyone reported in that they couldn’t FULLY get the smell of Oysters off themselves. Oh well, it was worth it! It was day 3 and time for the final event of the 2011 Chicago Food Film Festival; The 2011 Awards Ceremony Lunch

At this screening, we showed the winning films from the whole festival as well as the Chicago premiere of “How to Make a Turtle Burger,” and the Belgian smash hit “In De Keuken.” It was midday on a Sunday and I thought we needed to take the beverage profile up a notch to match the time of day and the event. For this epic closing ceremony, we exclusively poured Beers from Lagunitas including one very special pour, the “Hopsploitation.” I created this Beer cocktail at the NYC Festival where it became the official Beer cocktail of the 2011 Food Film Fest. It’s made by taking 2.5 parts of Lagunita’s IPA, full with a lot of fruit notes and combined with 1 part Bruce Coast Fresh Ginger Ale. The combination creates an almost mimosa like taste and is perfect for a food intensive brunch. 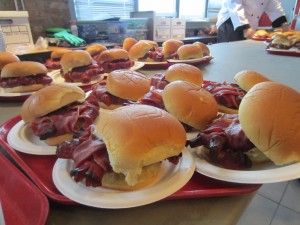 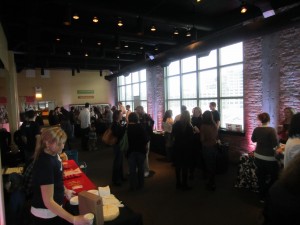 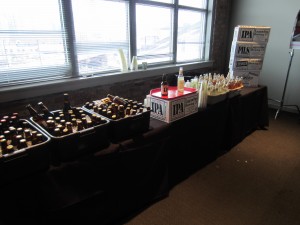 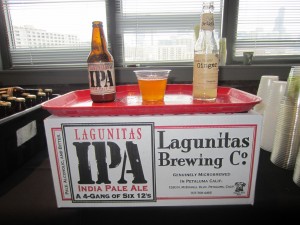 Once the films were screened, the Turtle Burgers were eaten, the Hopsploitations were drank and the awards were presented, it was time to close up shop. Why would I fly all the way to Chicago or spend an entire weekend of my free time in NYC to be a part of this, well if at this point you don’t get it, it’s because you have yet to “taste what you see on the screen!” There is nothing like this festival any where in the world.

All that amazing food, all that amazing beer, all those amazing films…man that was fun and to think it’s all put together by a staff of only 9 people (including our very own DJ!) is pretty damn amazing. NONE of it and I mean NONE of it could’ve happened without the help of Monkia Lotter and the Kendall College staff & students. Everyone truly has them to thank for not only welcoming us into their home but helping us to organize, run and most importantly, clean up these coolest food event in the whole world. Thank you all so much. Special thanks also goes to Emma, Olivia and the army of friends they hauled in to back up and run around like crazy for 3 days to ensure a good time had by all. You’re all amazing.

Now, if you think all of that sounds crazy … read part 3 (coming soon) to see how we blew off steam from all that hard work!

1 Response to Chicago Food Film Fest – How Many Times Can I Say Amazing?