The Pint of No Return – Sliding Into Victory

THE CONQUEST
Magazines, TV, friend’s recommendations, blogs (like this one!), online city guides, there area all kinds of ways people find out about restaurants and bars to check out. I use all of these and more and as it pertains to this post, I recently used a Taxi. Yeah that’s right and if you’re in New York, I’m not talking about an add on the TV screen. I was riding in one on the way home when we passed a new restaurant I had never heard of. The name was so interesting that I instantly Googled it and when I saw Burgers on the menu along side craft beer, my curiosity was up.

The Pint of No Return is right on the border of both Chelsea and the West Village, just West of Union Square and proudly boasts “Classic American cuisine, Comfy living-room style seating, Best craft beer selection in NYC.” The lengthy bar & restaurant also has a couch filled lounge for a more relaxed experience. The Pint’s bar menu offers a number of Beers on draft as well as a long list of bottle beers and even a few Beer made cocktails. Food wise, they have a selection of traditional American pub fare including a decent list of Burgers and Sliders.

When I noticed the  “Victory Black Velvet,” cocktail on their website, made with Victory Brewing Co’s Storm King & Prosecco, I instantly reached out to my friend Sean who works for the brewery. I LOVE Victory Beer, especially after visiting their brewpub on the first BROH’D TRIP. In fact, my favorite beer of 2011 was their Otto, a smoky-sweet and delicious Smoked Belgian Dubbel. Sean suggested we catch up there over a Burger and just like that, the first Burger Conquest of 2012 was on the books.

Sean, being the super rad mofo that he is, brought me a little gift, a bottle of Dark Intrigue. To make the Beer, they age their Storm King Stout in Heaven Hill and Jim Beam Bourbon barrels.

THE BURGER
Unfortunately The Pint of No Return wasn’t offering their entire menu at lunch and all they had was their Classic Burger with Cheese. It’s a thick pub style Burger served on a sturdy Sesame Seed covered Bun that was toasted very well. It’s a good thing because it has a very important job of soaking up the very juicy Patty. It was cooked with a nice pink center and held up well through the entire Burger. The Burger was good but damn, the French Fries were awesome.

Sean however, ordered a trio of Sliders; Sirloin, Pulled Pork and a Turkey topped with Cinnamon spiced Cranberry Relish and a grilled Apple. After tasting both the Pulled Pork and Turkey, I realized Sean was the day’s winner. I’d like to point out however, that The Pint of No Return’s Sliders are technically Mini-Burgers, very tasty Mini-Burgers. 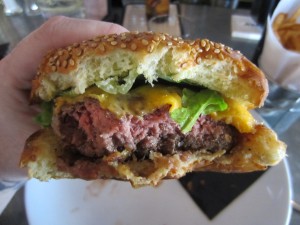 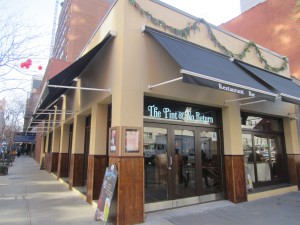 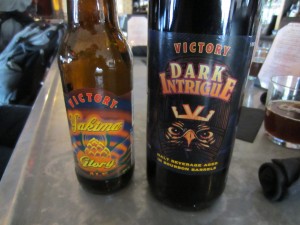 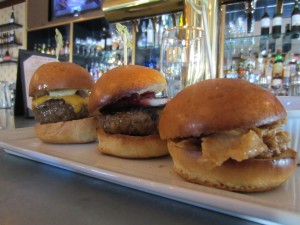 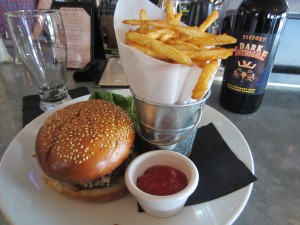 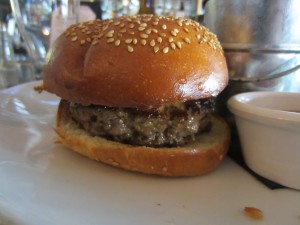 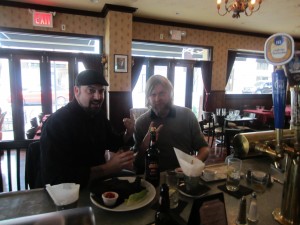 The Pint of No Return scores a 2 on The Rev Meter.

1 Response to The Pint of No Return – Sliding Into Victory