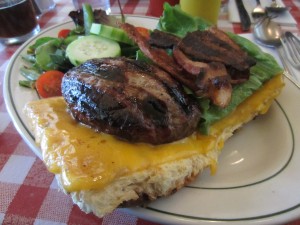 THE CONQUEST
What were you doing in 1847?  Herman Gerken was busy getting a lease on a wooden building at 94 Prince Street in what is now known as New York City’s SoHo neighborhood. He opened a grocery store in the location and 6 years later, in 1853, he bought the place. 3 years later he built the brick building that still stands there today. At that period in the history of our beloved city, grocery stores were often given liquor licenses and would sometimes develop into full on taverns & saloons. Such was the case at 94 Prince Street. Gerken died in 1860 but the property stayed in the family well into the 20th century, until when it passed into the hands of Michael Fanelli in 1922. He reopened it with his family name, operating as a speakeasy throughout the prohibition era through 1933. He held onto the place until 1982 when Fanelli’s Cafe came under the owner ship of Hans Noe.

To this very day, Fanelli’s Cafe can legitimately lay claim to being the second oldest food and drink establishment on the same site, in New York city since 1847. For the record, The Bridge Cafe dates back to 1794. Pete’s Tavern is #3 from 1851 and McSorley’s Ale House rounds out at #4, opening in 1862. (For more info, check out this post on NewYorkArtWorld.) While they don’t serve the bathtub Gin or homemade Wine anymore, you can still grab a pint and have a bite with a friend in the bar room, or in the back in the “Ladies and Gents Sitting Room.”

So what were you doing in 1847? I wasn’t even a gleam in a great ancestor’s eye but that’s not even important right now. What’s important is what are you doing on September 8, 2012? If you don’t know yet, save the date and come eat with me at Meatopia.

Meatopia is the meaty brain child of Josh Ozersky, author of  the beefy missive “The Hamburger: A History” & a member of NYC’s Burgeratti. This massive meaty outing has roasted Meats, smoked Meats, BBQ’d Meats, grilled Meats and all other kinds of Meat. In fact, you could say the event will have more Meat than you can shake a licked clean Rib bone at. Josh and I needed to “meat” up and discuss some meaty business so he suggested we “meat” at Fanelli’s to eat and discuss…Meat. Because if you’re going to have Meat on the brain, you should also have it in the nose, on the tongue and in your belly for proper inspiration.

That’s why I was a little surprised when Josh told me he was thinking about ordering a Grilled Cheese sandwich. Thankfully that though flew out the door, along with the thought of having a large scale Tofu event and Josh came to his senses.

THE BURGER
Although Fanelli’s does offer a slightly elevated diner menu, the star of the show & the reason people meat up here is to get the Burger. Josh and I both ordered one medium rare and with Bacon. Mine, with Cheddar Cheese. The Fanelli Cafe Burger comes on a square Onion Roll that’s almost as thick as the Patty itself. It’s a thickly packed and semi-coarse piece of Ground Beef that makes up the kind of Pub Burger this city was founded upon. It’s topped with a couple of thick slices of well-done, crispy Bacon and a piece of lettuce that is as square as the Bun surrounding it. The char grilled Burger certainly does look delicious and for it’s 2012 price of $11, it’s not a bad deal at all.

To call this Burger juicy would be an underplay. It’s practically swimming in it’s own juices which I realized as I watched Josh squeeze out the juices to be sopped up with the soft Bun. I opted instead to try and eat my Burger, juices in tact, which only meant most of it ended up my face, shirt, lap and napkin. That’s not a complaint by the way, it’s a warning, a messy, wonderful warning.

The Burger, while fresh and good, isn’t as savory and flavorful as I would like.  In fact, to quote Josh, “without the Bacon & Cheese, it’s a little flavorless…isn’t it?” Yeah he’s right. We’ve been spoiled in this town with some of the most delicious and intense Burgers & Meat in the world and it’s blown our palettes into a level of expectation that’s hard to achieve.

There was a time in this city where a fresh Fanelli’s Burger was the best you could get. Nowadays, it’s not the best, but it’s pretty good and if anything, it’s an important part of the history that built the Burgers we all know and love today. But you can read more about that in Josh’s “The Hamburger: A History” and we can all chat about it on September 8th. 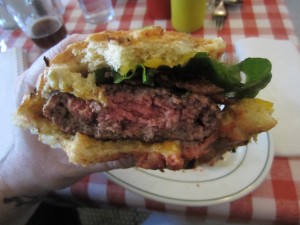 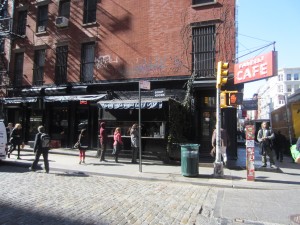 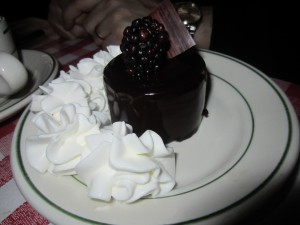 Fanelli’s Cafe Tavern scores a 0 on The Rev Meter.