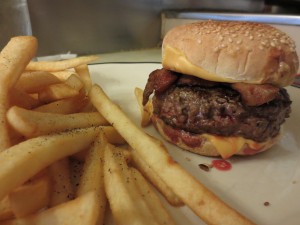 THE CONQUEST
I was recently put to task to find an old-school Burger in NYC that not only I have never had but was a hidden gem. I’ve eaten and written about 589 Burgers since the start of this blog, the majority of which are in NYC where I happen to live. My initial reach was thinking it would be easier to walk through the Lincoln Tunnel, swim across the East River, be elected Borough President or some other analogy for a needle in a proverbial NYC haystack. So I went to the Google and searched “old school nyc burger” which revealed the following list of been there / eaten that’s:

…and the list goes on. I should note that P.J. Clarke’s also came up in the results and although I’ve never blogged about it, I have eaten there. I read Grub Street, Eater, Thrillist, Tasting Table, Urban Daddy, Village Voice, Serious Eats and all those other sites daily. There literally isn’t a talked about Burger in NYC that I haven’t heard about and or eaten, especially one that’s been around for a long time. Then it hit me. I remembered there was an unassuming restaurant that touted their Burger and I looked it up once but for some reason just forgot about. After re-reading Nick Solares‘ post on A Hamburger Today from 2008, I thought I might have found the spot.

Joe Junior Restaurant is perhaps one of the least talked about, least known, most plain looking restaurant in all of New York City. Other than the cartoony image on their sign of a smiling face & a steamy Burger, it looks like the kind of corner luncheonette that used to be all over Manhattan. By all means and definitions, Joe Junior is a corner diner. They have a huge menu with pages and pages of Eggs, Sandwiches, Salads, Roasts, Pastas and the like. There’s only a couple tables and a long counter with seats for a quicker meal. You will not find any rare ingredients, name brand purveyors, famous Chefs or anything else beyond the ordinary. Joe Junior exists to feed people hot and fresh food and that’s it. But when you walk in, you’ll notice one thing, everyone is eating a Burger.

So of course, I had to eat it.

THE BURGER
As coincidence would have it as I was walking to the restaurant, who do I bump into? Nick Solares. “What are you doing over here?” he asks me. Before I can get an answer out of my mouth, Nick answers his own question; “You’re going to Joe Junior aren’t you? It’s great man, you will enjoy it. Be sure to tell them I sent you and insist that they do NOT use the plancha on your Burger. They’ll squeeze out all the juice if you let them.”  If Nick told me the best way to eat his favorite Burger was while whistling dixie in my skivvies atop the Empire State building, damn right I would do it. Thankfully this request was much easier.

While I spooning down the soup, I watched the grillman make our Burgers. The grill is right there on the other side of the counter in plain view. No secrets here, you see it all. He took two fresh Ground Beef patties, placed them on the flat top and started cooking. As I watched him flip them and also move them around the grill several times, my hopes started to diminish. One of the reasons you don’t flip a Burger more than once or maybe twice is so you don’t ruin the char. You also don’t want to over handle them and lose all the juiciness. I then watched him stick the plain white Sesame Seed Buns in the broiler. Another interesting move. A broiler is incredibly hot and the chance of burning something as delicate as a Bun is pretty high. I just kept my fingers crossed.

You are so delicious. You are so juicy. You are exactly how a Hamburger, and lets now use the formal version of the word to refer to you, should be. Your simple squishy white Bun with Sesame Seeds is the exact kind of Bun a Hamburger should be served on. Your simple slice of processed American Cheese is just the right amount of melted and salty. The Bacon you surround yourself with is crispy, smoky, a little peppery and not overcooked. The juices that flow out of you are the food equivalent of fireworks. The more I see, the happier I am. Your buddies, the French Fries are pretty standard and normal but I know they, like me, enjoyed taking a dip the Hamburger juices.

Every Hamburger in the world could benefit by hanging out with you. You are the every man Hamburger. You are the American dream. You are a best friend. You ask for nothing but go above and beyond what you are supposed to do, which is provide sustenance. You’re the kind of friend that I want all my other friends to know because selfishly, you make me seem like a better person for introducing you to others.

Why did I wait almost 17 years of living in the New York area to eat you?

I ask myself this but I know the answer. I had to eat all those hundreds of Burgers before you so that I could appreciate what is so special about your simplicity. You teach a very important lesson: do something and do it right and then do it again and again. You are not just a standard Hamburger, you are A STANDARD by which others should measure themselves.

I look forward to eating you again. 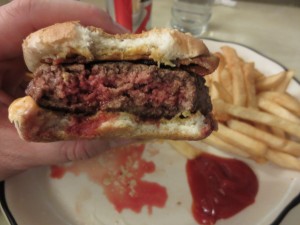 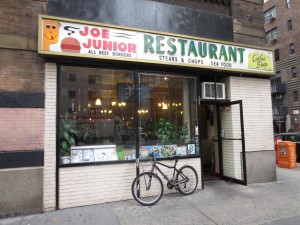 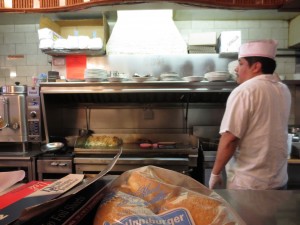 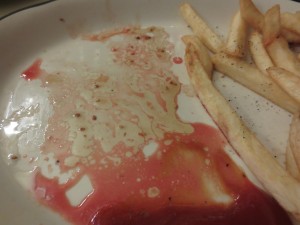 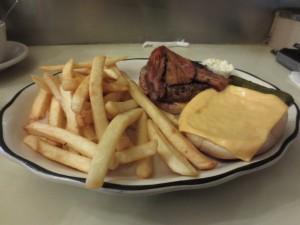 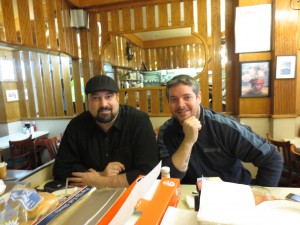 Joe Jr Restaurant scores a 3 on The Rev Meter.