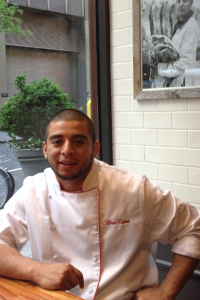 Where do you live: Bronx, New York

Favorite Childhood Burger: Wendy’s for their buns and simplicity.

What is the one Burger you’ve always wanted to try but still have not: The In-N-Out burger.

If you could eat any Mythical Creature which would it be: Puff the magic Dagon with mushrooms. How cool would that be? I love to be different.

If you could have a Burger with anyone alive, or dead, fictional or real, who would it be and where would you take them: Gordon Ramsey and I would take him to the original PJ Clarkes. There’s something special about this place. The atmosphere makes the burgers taste that much better.

Name one Burger in LA that for once, people should get off a plane and go eat instead of In-N-Out: Sorry, it’s the one burger I want to taste but haven’t.

Please use this space to talk about or plug anything else you want:
Next Clarke’s Standard opening: