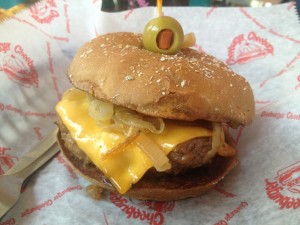 THE CONQUEST
The history of the diner dates back to 1872 in Providence, RI to a man named Walter Scott. He served Food from a horse drawn wagon to night workers and patrons of men’s clubs. This lunch wagon had open windows on either side from which he could serve Food. Commercial production of these lunch wagons began in 1887 in the town of Worcester, MA and the first patent for a diner was granted 4 years later. The word “diner” however, didn’t come into use until around the mid 1920s, right around the time that White Castle started to put Hamburgers on the path to being the quintessential American Food item. The American diner revolution had begun and quick way to have a casual meal swept the nation as  The Jerry O’Mahony Diner Company of Elizabeth, New Jersey produced more than 2000 diners between the years of 1917 and 1952. The diner was then a part of every day life and getting a Sandwich, Fries and Shake was about as American as a meal could get.

The 1950s diner with it’s Hamburgers, Shakes and Fries lives on in the form of Cheeburger Cheeburger. Founded in 1986 on Sanibel Island, FL, the casual dining chain is 50s style diner & Soda fountain specializing in those key items. The place is complete with decor from the era as well as its own radio station playing everything from Motown to Oldies to Surf Rock. Cheeburger Cheeburger is known for it’s “invent your own” Burger or Salad, giving you more than 8 million possible combinations with an array of toppings, sizes and accouterments. The have 5 different sized certified Angus Beef Burger patties, including their signature 20 ounce “Pounder” Burger. You also have the choice of a Salmon, Turkey or Veggie Patty.  If you’re into French Fries, even more specifically Loaded Fries, this is your spot.  The Cheeburger Cheeburger “Loaded Fries,” Skin-on, are piled high with BBQ Sauce, Ranch, Chili, Cheese Sauce, Melted Cheese and Jalapeños. You wash down with a Milkshake with more than 1 million flavor combinations, Sodas, Wines or Beer. Just have the hostess show you to a table or grab a stool at the counter and let your meal begin. 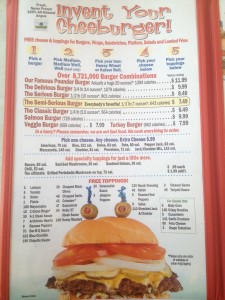 THE BURGER
In all the 5 boroughs of New York City there is only one Cheeburger Cheerburger location so if you’re looking for a 1950s diner Burger experience, you’ll need to head to Park Slope, Brooklyn to find it. I was tempted to order the “Pounder” but decided instead to go with the 1/3pound “Semi-Serious” sized Burger on a Honey Wheat Bun, topped with American Cheese and Sauteed Onions. I really liked the sweetness of the Bread which also has a good sturdiness to its shape. The Burger, made fresh is served Medium. The Burger is everything it’s supposed to be and although I wasn’t alive in the 50s, this is pretty much what I think of when I think of a classic diner Burger. The Loaded Fries for me were the star of the show. The Spuds themselves, despite being completely covered, hold up in their firmness without every getting soggy. The whole dish is a complete flavor bomb that goes from sweet to spicy to smokey to savory and all other points in between. These would make for an intense post bar snack. I definitely felt like I needed a nap after eating them! After getting through both dishes, I couldn’t imagine having eaten a larger sized Burger. 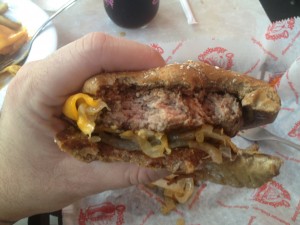 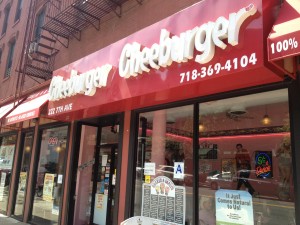 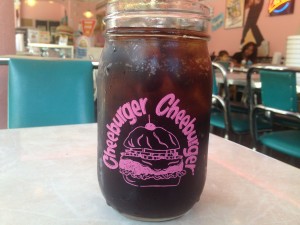 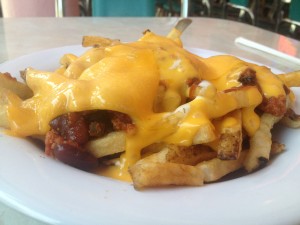