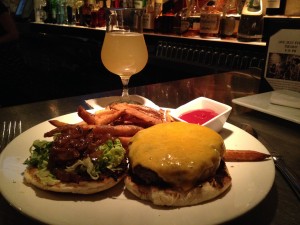 THE CONQUEST
Much like everything else here, rent in New York City is expensive. There’s a lot of people, a lot demand, a lot of businesses and a lot of competition and all of it comes at a very, very high cost. A business has a lot of choices to make in terms of maximizing profit and some of those are about spending while decisions are about saving. Knowing where to spend and where to save can make or break a restaurant. Smart restaurateurs know where to spend so that it results in more profits. Every square inch of a restaurant is beyond valuable and key in making sure it can be profitable. That’s why its always impressive to see a successful restaurant that uses fresh, local, hard to find and unique ingredients in their Food.

Lack of space and the high cost of it is probably the reason that there aren’t a lot of breweries located in the city, let alone on the island of Manhattan. All that expensive equipment also takes up a lot of space. Add those two things together and that means a high operating cost. It’s easier and more cost effective to buy really great Craft Beer from a number of different distributors. But that’s not what 508 Gastrobrewery does and it’s part of why it’s so great.

Located on a quiet street,  just a couple blocks off the West Side Highway near the entrance to the Holland Tunnel is the 508 Gastrobrewery. Opening in 2008, founder & Chef Jennifer Hill had the desire to serve New Yorkers great Food and Drink. Coming from the kitchen she created a menu described as “Rustic Mediterranean-American” Food. Most items are served in small or sharing plates ranging from Pizzas to Crostinis to Lobster Claw Sliders and Jalapeno Fried Oysters. Jennifer’s menu selection also include a few Housemade Pasta dishes and some larger, mostly seafood based entrees. What makes the food and cozy environment even more unique? All the Craft Beer of draft is brewed just below the dining room by local brewer Chris Cuzme. An active part of the brewing community, Chris is known as a “Zymurgician,” and certainly knows his way around great craft Beer. The list of available Beers on tap is constantly changing based on new ideas, collaborations, sourcing unique ingredients or trying to make federally inspired Beers. Between the fresh Beers and unique Eats, your guaranteed to have a gastronomic adventure. 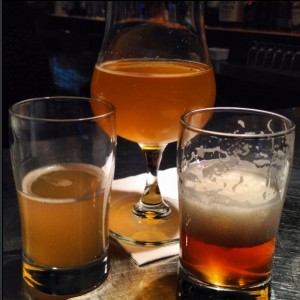 THE BURGER
Chris recently brewed a beer with Alewife Brewing Company’s Charlie Wildman called “Soft Crack Saison.”  Clocking in at 6.7% ABV, this Beer is made with Rose Hips, Rosemary Sprigs and Candy Sugar. The results of their self proclaimed “brolaberation” is a complex and tasty Beer. It’s still on tap as I write this but probably not for long. It’s also the reason the Get Real Presents crew joined up and headed over for a little food, drink and fun. After sipping through a few tasty beers including the AWESOME “Bump N’ Grinds,” a dry hopped session ale made with hand ground Coffee Beans from Staten Island’s Unique Coffee Roasters, I need to get some Eats in my stomach. I took a look at the menu and I’ll bet you can’t decide what I decided to get.

The Burger at 508 is built around a 10 oz Shortrib Patty sourced from Pat LaFrieda. It’s topped with Cheddar, Caramelized Onions, Tomato, Lettuce, Housemade Pickles and served on a Portuguese Muffin with a side of Fries. Without having taken a single bite, I knew this would be good. Shortib makes for a sweet and savory Burger which this guy is a fan of. Add to that one of my favorite Hamburger Buns, a Portugese Muffin which is kind of like what if a English Muffin was combined with a thick Pancake, and you’ve only got room to screw it up. Thankfully that’s not the case! The Burger at 508 is a juicy creation with a lot of all natural flavor made with fresh ingredients served with a selection of expertly made in house Craft Beers. In other words, there’s only 1 place in NYC where you can have a house brewed Gose & a Cheeseburger on a Portuguese Roll. 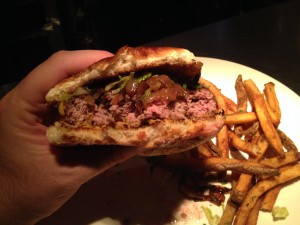 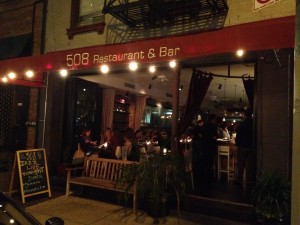 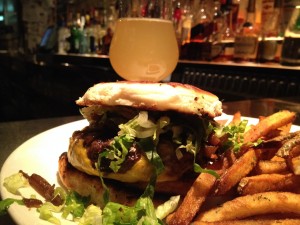