THE NYC AREA WINTER GOOD BEER PASSPORT
– 1 craft beer at each participating location for the whole winter –
January 1 through March 1, 2015 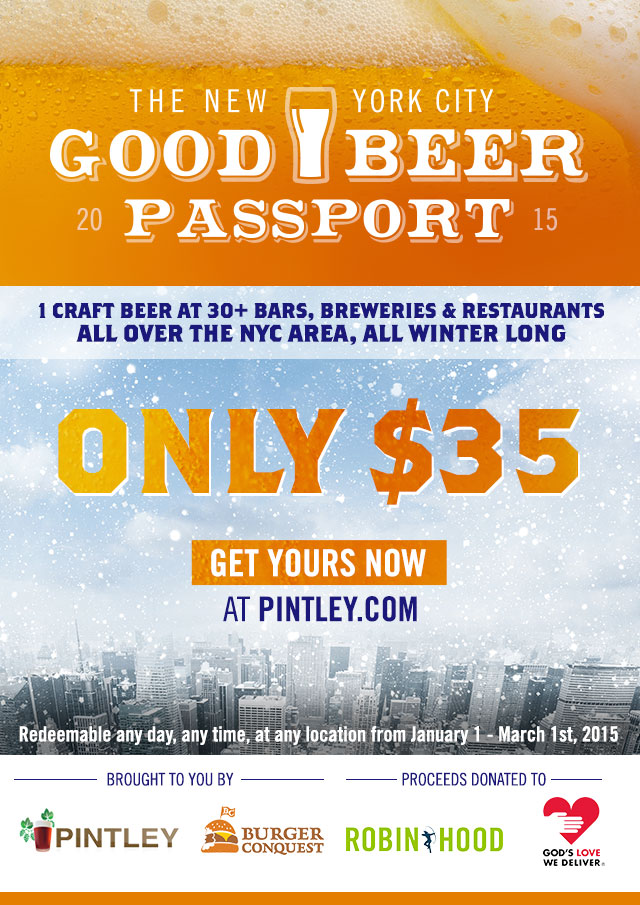 Pintley and Burger Conquest present The NYC Area Winter Good Beer Passport, which will act as a fundraiser for Gods Love We Deliver & The Robin Hood Foundation.

By purchasing a passport you’ll get one full craft beer or a flight of craft beers (where flights are offered) at every location participating. You can use them any day, any time from January 1st through March 1st, 2015.

When purchasing a The NYC Area Winter Good Beer Passport, choose the location where you would like to pick up your passport. Passports are available for pick up from January 1st through January 31st, 2015.

As part of your purchase of The Winter Good Beer Passport you will receive invites to special Craft Beer events happening at the participating locations during the redemption period. Just keep an eye on your email for details.

Bars, restaurants, beer stores & breweries interested in participating in the passport, please reach out to Rev Ciancio before December 19th at therev@yeahmanagement.com

Fine Print:
*Must be 21 years or older with valid ID
*1 passport per person
*You may buy 1 additional as a gift
*Misplaced passports can not be replaced

About Pintley:
Pintley is a craft beer community connecting drinkers, brewers, and bars. Drinkers use Pintley to discover great beer. Pintley learns from your tastes, suggests beers you’ll love, and invites you to free local beer tastings where you can try them. Brewers and bars use Pintley to grow sales. Pintley’s craft beer events help bar managers fill their bars on slow nights, while helping brewery reps gain and keep draft lines.

About Burger Conquest:
Burger Conquest is a blog written by sales marketing strategist, David “Rev” Ciancio about Hamburgers, travel and content marketing. Rev is the Director of Marketing at Burger Maker / Schweid & Sons, has been featured on numerous different TV shows and named an “Expert Burger Taster” by The Learning Channel. He is also the founder of The Burger Week, an annual delicious celebration of all things Burger in New York as well as South Florida and Charleston, SC.

About Gods Love We Deliver:
God’s Love We Deliver is the New York City metropolitan area’s leading provider of nutritious, individually-tailored meals to people who are too sick to shop or cook for themselves. Founded in 1985 when one woman began delivering food on her bicycle to a man dying from AIDS, God’s Love now cooks 4,600 meals each weekday, delivering them to clients living with life-altering illnesses in all five boroughs of New York City, Newark and Hudson County, New Jersey. All of our services are provided free of charge to our clients, their children and to the senior caregivers of our senior clients, without regard to income, and we have never maintained a waiting list. Because we believe the combination of hunger and serious illness is a crisis, we deliver food within 24 – 48 hours of first being contacted.

About The Robin Hood Foundation:
Robin Hood is New York’s largest poverty-fighting organization, and since 1988 has focused on finding, funding and creating programs and schools that generate meaningful results for families in New York’s poorest neighborhoods. Since its founding, Robin Hood has raised more than $1.95 billion in dollars, goods and services to provide hundreds of the most effective soup kitchens, homeless shelters, schools, job-training programs and other vital services that give New York’s neediest citizens the tools they need to build better lives. In addition, Robin Hood’s board of directors pays all administrative, fundraising and evaluation costs, so 100% of your donation goes directly to organizations helping New Yorkers in need.