All The Types Of French Fries Defined – Fun With Fries

All The Types Of French Fries Defined

#FunFryFact – there are at least 21 different classifications for French Fries.

If you are truly a French Fry lover, I suggested following my French Fry themed Instagram account, @funwithfries where you will be met several times daily with some of the best French Fry photos that the internet has to offer. 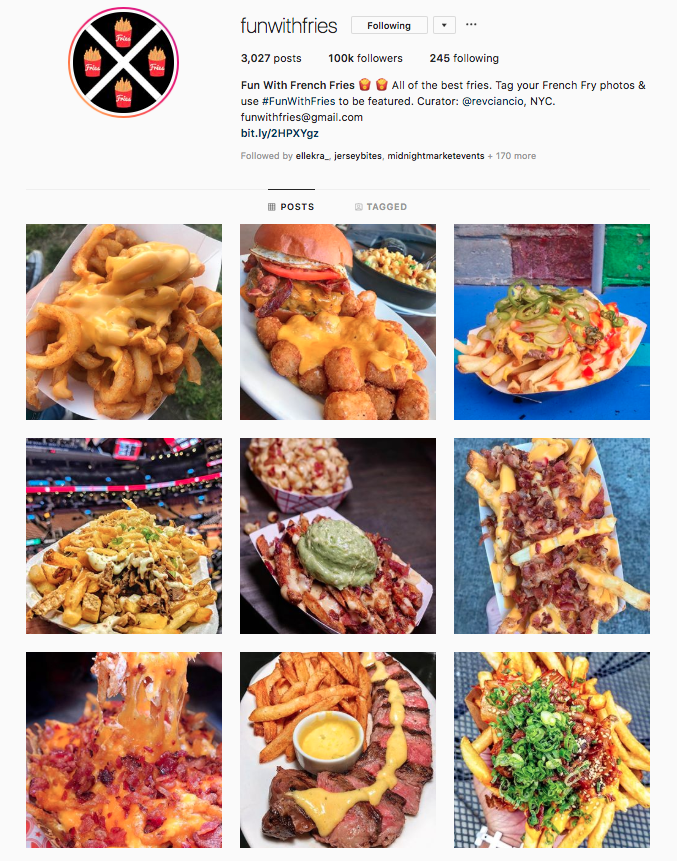 I’ve been cataloging some of the best French Fries on the internet there for years now. By following the account you’ll be served daily with more enjoyable gratuitous French Fry love than should be allowably legal.

I’ve even been featured on ABCNY7 on my how I display the world’s excitement for Fries through the lens of Instagram.

This is the ultimate guide to understanding them. Below you will find definitions, explanations, preparations and photos that will help you to realize and understand the world of the French Fry.

Belgian Fries / Frites: made from a special Belgian Potatoes called bintjes which is very soft. They are thick-cut and double-fried. Traditionally served in a paper or wax cone with mayo and ketchup.

Cheese Fries: Any French Fries covered in cheese. No one in particular can nail down the origin of cheese Fries but it’s believed to be linked to the creation of canned cheese. Cheeze Whiz is the most commonly known example dating back to 1952.

Chili Cheese Fries: This is an adaptation of cheese Fries whereas chili is added on top of the Fries with cheese. Don A. Jenkin claims to have invented the chili cheese Fry at the age of 16 in Tomball Texas. The name Austin Ruse’s gets mentioned often as the first person to serve chilli cheese Fries out of a Dairy Queen in Missouri. Which just so happens to be the same restaurant chain where Don A. stakes a claim.

Chips (British): Im here to tell you that there is no difference between French Fries and what the British call “chips.” While in American, Fries typically tend to be long and then, traditionally in British, the “chip” is not as big as but close to being a steak Fry.

Cottage Fries: Search Cottage Fries on the internet and you’ll be taken to pages about home fries. No. That’s in accurate. These are made by cutting a potato into thick slices using a corrugated slicer. Imagine Ruffles potato chips but thicker and flatter. They are the fries of choice at the famed JG Melon of New York City.

Crinkle Cut: These Fries are defined by the way in which they are sliced. When cut with corrugated knives or mandoline blades it creates a corrugated surface on the French Fry. Potato chips can be made in the same way. But which came first? The Fry.

Curly Fries: The distinctive feature of these Fries are having a spring-like shape. To create them, they are cut from whole Potatoes using a specialized spiral slicer. These have also been called “Goldilocks Fries” or “Suzi-Q Fries.” Typically they are breaded, coated and or seasoned. They are also the best kind of Fries and you should eat some now. RIGHT NOW

Garlic Fries: a special kind of topped Fry that is so unique and popular that it has earned its own classification. These Fries are served with grated parmesan cheese, salt, parsley and copious amounts of chopped garlic, most frequently from Gilroy, CA, the garlic capital of the world.

Easing into Monday one killer rosemary garlic fry at a time. Who’s with me? (bonus Monday feels because they're baked and/or airfried) #ad @alexiafoods Head to the link in my bio for the recipe ⠀⠀⠀⠀⠀⠀⠀⠀⠀ #foodiecrush #foodiecrusheats #frenchfries #garlicfries

Home Fries: When you parboil, slice and then Fry Potatoes, they are typically called home Fries and served with breakfast.

Loaded Fries: When cheese Fries are not enough, they get topped with other items like bacon, sour cream, jalapeños, pulled pork, mac and cheese, pepperoni, red sauce or any other combination of items that turns them from being a side item to a main course. Nacho Fries, or Irish Nachos (when the tortilla chips are replaced with a Potato variation) would fall under this classification.

Pommes Souffles: Some might call the French Potato preparation a chip, and they are wrong. Slices of Potato are fried twice, once at a lower temperature of about 300 °F, then cooled down and then fried again around 375 °F. This causes them to puff up like little balloons as they turn golden brown. They were invited almost by accident in 1837 by Chef Jules Colline, who also invited Béarnaise sauce. He is a hero.

Got some trips solidified in my calendar so I am super excited for that! Definitely want to check all the @McDonald’s in the world like these potatoes wedges I got while in Mexico! #mcdonalds Snapchat: foodwithmichel

word on the street that it’s national poutine day? so here’s one of our faves @thewhitebrickkitchen ??? – #poutine #nationalpoutineday #toronto #torontofood

Shoestring / Matchstick: The Merriman-Webster dictionary defines these as “Potatoes cut into very thin long pieces and fried in deep fat : very thin French Fries. Sometimes you might see potato sticks on a menu. They are a form of shoestring and commonly found as a sandwich topping in Cuban cuisine known as Papas Julianas.

Smiley: AKA Smile Fries and Potato Smileys. Its a circle shaped French Fry with 2 eyes and a smiley mouth cut out. No one really knows or claims to have invented them and its possible that they just dont want to. Why? They are the most inferior of Fries, but they exist and they are a classification.

Standard Cut: This is the classification for the most popular, well-known and common version of a French Fry. When you picture Fries in your mind or someone creates an emoji to sum up all of the French Fries in the world, they are standard cut Fries.

Steak Fries: These are Fries that have a thick cut and got their name because they are typically served with steak. These are not to be confused with steak frites, which is an entire dish made up of steak, standard Fries and either a peppercorn or Béarnaise sauce. Special shout out to Onion Rings which are not French Fries but are a much better side for steak than Steak Fries.

Sweet Potato Fries: A variation of Fries made from a sweet Potato. Sweet Potato Fries can come in many forms including standard cut, waffle and tater tot. They’re super power is to transform into a desert so feel free to dip or top with honey, sugar, syrup or marshmallow cream.

Tater Tots: 1953 was a banner year for Potatoes. Ore-Ida founders F. Nephi Grigg and Golden Grigg invented these by chopping up leftover slivers of cut-up Potatoes, added flour and seasoning and then pushed the mash through holes and sliced off pieces of them before deep Frying. 1956 was an even more important year because that’s when tater tots were first offered in stores. The world has been an amazing place ever since.

? When Fridays used to be all about 4 square during recess, but now you only bout hangin with your tots. Well guess what? No more friendsies for you, it’s cherry bombs here on out ??. ?: Philly Cheesesteak Tots, Country Fried Chicken Tots, Nacho Cheese Tots, and Side of Tots ?: @stockyardsandwichco ☃️: Santa Ana, CA ??: Now taking comments

Tornado Potatoes: These are also known as twist Potatoes or tornado Fries and originated as a street food in South Korea. They are defined on Wikipedia as “deep fried spiral-cut whole Potato on a skewer, brushed with various seasonings such as onion, cheese, or honey. Some varieties have spliced sausages in between.”

Extra saucy chip stix because why not?? ??? #elbowsmacncheese

Waffle Fries: If French Fries had a “triumvirate of awesome”, meaning the 3 best and most superior types of Fries, Waffle Fries would be one of the points of the triangle along with Curly Fries and Tater Tots. Waffle Fries are created by quarter-turning the Potato before each next slide over a grate. This gives them a lattice, or criss-cross shape. If you’re fancy, or nasty (in the Janet Jackson sense of the word), you call them by their French name, Pommes gaufrettes.

Now go forth and have some #FunWithFries!