Google search “best hamburger nyc” and you will find one restaurant in common with nearly every list, the Corner Bistro. It was even named checked in “The Best Burger in New York” episode of “How I Met Your Mother” on NBC. It’s the burger to beat, or so we were told. In fact, some say our opinion was not credible without having taken a ride on the Bistro Burger train.

Enter a snowstorm struck Manhattan Friday afternoon and 5 people with the day off! Located in the West Village, the Corner Bistro is really nothing more than a ragged Irish bar with a menu so simple, that they don’t print them. Burgers, chicken sandwich, grilled cheese, chili and fries. Without much fuss, we ordered a few beers, some fries and of course a burger each. Arriving was no small feat considering the weather conditions and that some of us had to take multiple trains to get there. The anticipation was building.

When the waiter arrived, he dropped Tim’s burger on the table. The bacon slid into Jackie’s glass. It was a mess. Did he take it back to get us another? No! He just left it there and said sorry. Chuck, who is allergic to cheese, specifically ordered his with out but with grilled onions. When it arrived it had cheese and no grilled onions. Both burgers had to be sent back.

My burger was small, in fact so small, that it left me hungry, even after a plate of fries. There was hardly any juice to the burger and it was over cooked on the edges. The bun fell apart as I ate it and for all the hype and all the excitement, I was really let down. It was your average burger, nothing more nothing less. The overcooked shoe string fries, the same they served in my high school cafeteria were nothing to be excited about. In fact, it was like a summer block buster movie, loaded with celebrities that in the end was all advertising and marketing but no story.

Add in the terrible service and I just can’t feel any excitement about this place. 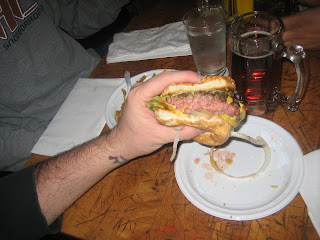 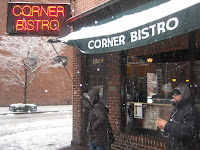 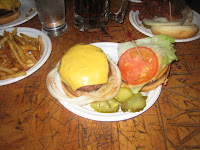 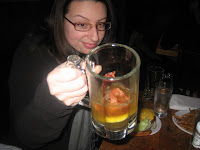 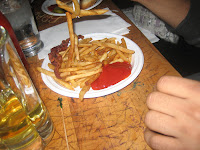 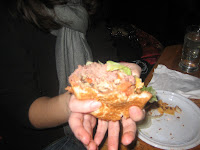 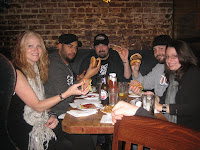 I was left so disappointed. I just couldn’t go out like that. I made a suggestion to Team Burger that everyone was instantly excited about…

Realizing we were only 1 Avenue’s walk from the Old Homestead Steakhouse, also on many a top 10 burgers in New York list, the decision was made to bring on a challenger.

Some of you may know we have a sister foodie website in http://steakclub7.com who parades the Old Homestead as the best Steak in NYC. Now it was time to see how the burger racked up.

A much fancier environment and less noisy, the Old Homestead has been serving up steaks in Manhattan’s meat packing district at this point for more than 137 years. You have to be doing something right to be in business that long.

The meal started off with their Kobe Slab Bacon, which is pretty much the ultimate slab of salted pork. It’s not like your Daddy’s Sunday morning bacon, this thing is a monster! It’s larger than your plate and has the taste of pure salted heaven.

Then it arrived. The coveted Old Homestead Burger, looking glorious and ready to be munched up by 5 people hoping for a big win. Oh god. Oh thank you. Oh Homestead!! The burger was cooked to a perfect medium rare. The meat was succulent and juicy. The cheddar cheese was flavorful and oozing out the sides of a well constructed bun that held together through the entire burger. Even the fries were delicious. I tried Chuck’s pepper slab burger and it was simply divine.

This was our white whale. Ahab could go home. Not only was the day avenged but we found a new #1 burger in NYC. Old Homestead, you never disappoint. 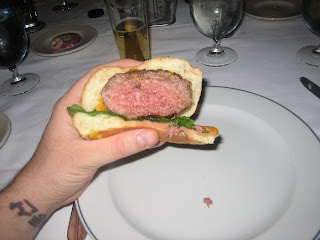 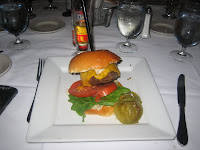 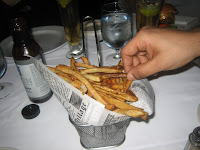 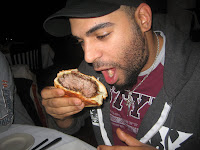 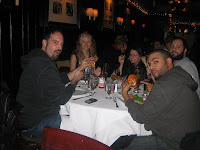