The Peanut Barrel – My Alma Meater

On a recent trip back to East Lansing, Michigan, I decided to stop in and revisit an old friend (read: burger) and catch up on old times. East Lansing is home to Michigan State University which also leads to lot of bars and cheap eats. One of my favorites while attending MSU was The Peanut Barrel. One of the only place in town that not only had a great selection of beers but also an outdoor patio, free peanuts and a well known hamburger, the Papa Joe. MSU providing my formal education and The Peanut Barrel providing part of my burger education, it seems only right that it’s featured on Burger Conquest.

With more beers, than food options, it’s easy to see that the Barrel is dedicated to a quest. Neither menu has changed much in the 16 years that I have been eating there. I ordered a cheese burger media rare with cheddar and a rye bun (a much tastier option than white.) The rye bun was hearty and delicious, just like I remembered it. But the bread to burger ratio was way more in favor of the former. The burger didn’t seem as big as I could recall and it didn’t seem as juicy and flavorful as my memory served. Perhaps it’s been my worldly burger experience since or maybe the quality has dropped.

If you’re in East Lansing, it’s a great choice with a great atmosphere and for a low price. 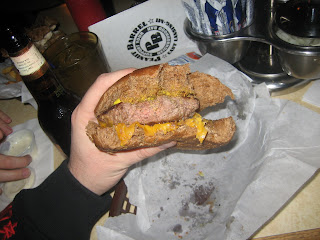 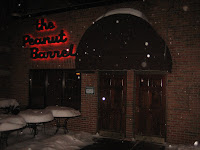 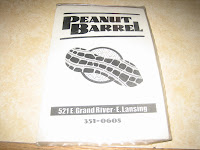 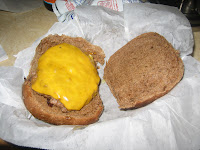 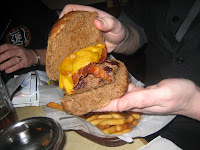