From the same people that bring you BurgerConqest, we now proudly present the results of WING-OFF7! I know, I know, this is a burger site but chances are if you like burgers like we do, you probably like wings too!!

As reigning champ Scruff Duffy’s and their legacy Lansdowne remain undefeated, we have decided to retire them for the time being to make room for new challengers.

NOTE: Wing-Off judges solely on medium and hot wings. Service, ambiance, beverage selection, price and other menus have no factor but they sure do count for a good time! 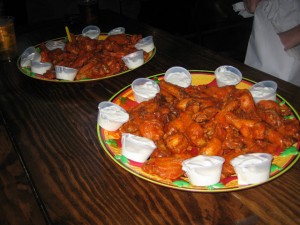 Kudos to Town Tavern for giving us not only a private table but also in a private room and with the Giants / Eagles game on the TV! Which was good because the Town Tavern is an Eagles bar the Wing-Off crew is made of primary non-Eagles fans!! After a Jameson shot with our waitress Kat and a round of beers, it was time to start em up; 40 medium and 40 hot!

The medium were fantastic and in what might be the first time ever, better than the hot! They had a nice buttery taste with the right amount of hot sauce. You could actually get a good taste of the chicken. Although not a factor in our decision, the blue cheese was thick and creamy…just the way we like it! A couple of beers and some very, very friendly service from Tabitha and Kat and we were on our way. 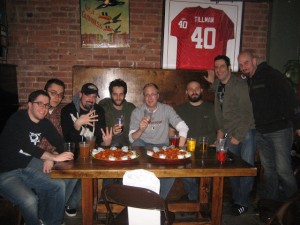 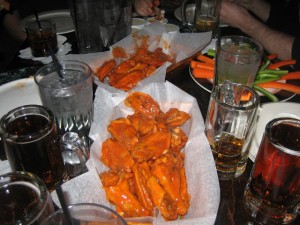 This place is new on the scene but making a quick buzz. Although their claim is “NYC’s Best Philly Cheesesteak” we heard the wings were top notch. They held us a table in the back corner and within seconds, the excitement was at top level. Check out the menu; pictures of owner Aaron’s dad, cheesesteaks, garbage bread, fried a mozzarella bread and of course “Krazy Kate’s Wings!”

We place a gut buster bomb of an order with our fantastic server, Kristin: 20 medium, 20 hot, 3 cheesesteaks, waffle fries with ranch, gravy and cheese and enough $3 Yuneglings to drown a small village.

The wings were delicious. Hot, tasty, breaded just right and cooked perfectly. It was not going to be an easy decision. The cheesesteaks were pretty decent and the fries were good too. But the real winner were the special salt and pepper wings that Aaron had prepared especially for us. WOW. Talk about amazing! Doug and Dan went in for a 2nd order. But, not a factor on the decision. 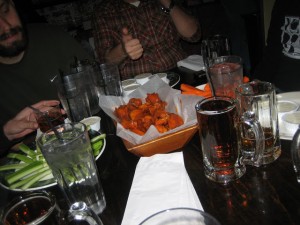 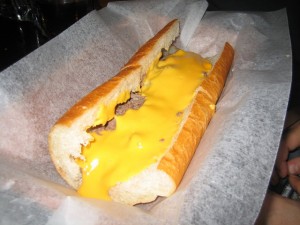 WING-OFF 7 OFFICIAL WINNER – WOGIES!
Congratulations, you advance in the standings. To be fair, both places were fantastic and you couldn’t lose slopping up wings at either Town Tavern or Wogie’s. 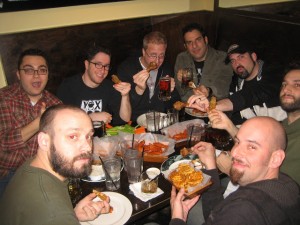 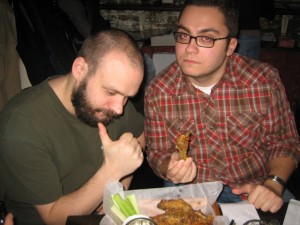