Named after a now defunct television network, Dumont has been serving up their DuMont burger for 7 years. I am told the Dumac & Cheese can be described as “sex in your mouth” but that is another blog, possibly 2 other blogs! It’s a no frills restaurant with 2 inside dining areas and a covered garden patio in the back.

I ordered my DuMont Burger medium rare with white cheddar and pickled onion but sans pickles (which I am told theirs are amazing) and tomatoes. Side of crispy fries accompanied the fabled DuMont and although I asked for ranch dressing, I never got it. The burger showed up only a few short minutes after we ordered. Admittedly I was shocked and impressed.

The burger was cooked perfectly! Dark sear on the outside and red on the inside. A little mustard and I was ready to bite in. The bun was delicious and held up well throughout the burger. There wasn’t enough cheese to really have an effect and the burger itself was really good, just not really great. It was missing something and honestly, I couldn’t figure out just what it was. My friend Marc, had bacon and blue cheese on his and said it was amazing. Maybe I just dressed my wrong. The complimentary homemade donuts were a nice touch though!

It was like a trip to an amusement park filled with great rides, good food, short lines on a warm sunny day with your friends but realizing they have no whack-a-mole game. Just that one little thing would make the difference. 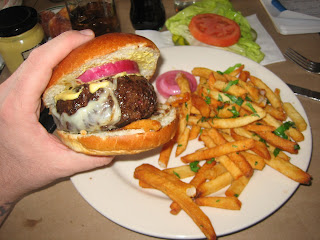 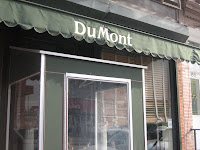 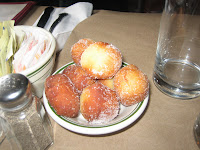 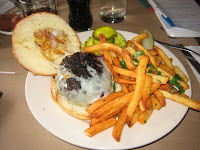 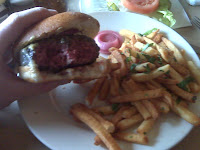 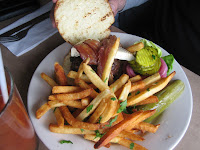