THE STORY
Macy’s, famous for being the world’s largest department store also has a gigantic wedding registry, a massive catalog, stores all over the US. and even it’s own Thanksgiving Day Parade that ends in the arrival of Santa. Located smack dab in the middle of Manhattan in Herald Square, millions of people flock there from all over the world to shop for the latest in fashion, home ware, jewelry, beauty supplies and more. The store itself is so big and so old that it’s a site to see unto itself complete with wooden escalators declared as official landmarks.

But what they don’t tell you, is that the restaurant in the basement, known as Macy’s Cellar, has one of the best burgers in all the land. After a day of endless shopping, the Macy’s “Cellar Burger” is like finding the gold after mining the rivers of the old West all day long. “THARE’S BURGERS IN THEM THERE CELLARS!!” As a native New Yorker, its one of Cara’s (my wife) favorite burgers in the city and this trip was part of her X-mas present. Pretty classy guy eh?

THE BURGER
Macy’s Cellar also server an “All-American Burger,” which is probably pretty good but the reason for the season is the Cellar Burger. It’s certified Angus beef, grilled with cheddar cheese, hickory-smoked bacon, frizzled onions, tomato and a pickle and comes with a side of fries. We both ordered medium rare and to credit the Cellar, was exactly how they were served. There are so many “frizzled onions” that you have to use your hands like a compress to get the burger down to bite size. Its served on a tasty brioche which ads a slight sweet taste to each bite. Its a good burger people, but its the frizzled onions make all the difference. Go easy on the red onion so as not to over power the rest of the tasty flavors.

Now that the cat is out of Santa’s bag, don’t take your new Lennox knife and spread the word like too much butter, the burger needs to stay ours! 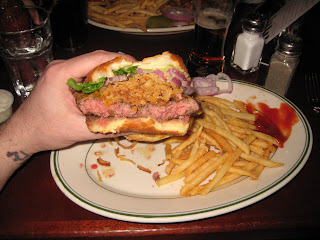 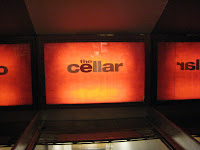 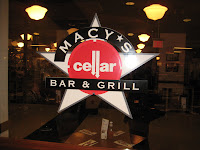 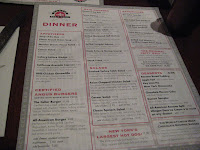 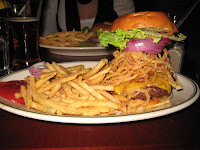 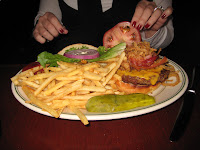 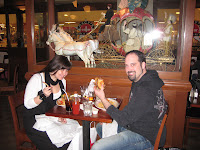