Jack In The Box – Just Had to Pee, Not Menopause

THE STORY
I was driving across the desert from Indio to Los Angeles, CA and wouldn’t you know it, as soon as I got to LA and it’s traffic, I had to pee. I pulled off at the first exit I came too once I couldn’t hold it any longer. That exit, the N.W.A. / Eazy-E made famous, Crenshaw. The first thing I saw off the exit was a Jack in the Box and although I intended just to relieve myself … well you know what happened. With more than 2100 locations in 18 states, you are never far from a Jack In The Box, especially in LA. Known for their off-the-wall and crazy marketing schemes and commercials, not to mention the guy in the clown face, you can play with all of it vistaing Jack in his office.

THE BURGER
Although at Wawa, I would be very excited to use an auto-mated sandwich computer to order, at a fast food chain in the ghetto, I just preferred to order from a human. I kept it very simple, Jack burger with lettuce and cheese along with a small order of curly fries. Whether fresh, frozen or otherwise, you can’t go wrong with curly fries, as long as they’re fully cooked and in this case, the Jack delivered. I opened the burger and immediately appreciated Jack’s policy of 1 slice of cheese on either side of the burger. Why skimp?!?! I can’t lie, for a fast food burger, it was really good. The Jack burger is definitely better than the Arch’s and the King. Really, all you taste is a bunch of sodium but for a burger craving, it more than gets the job done. 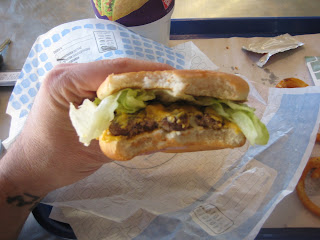 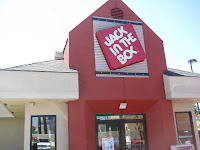 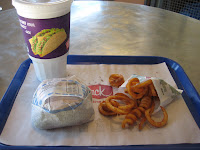 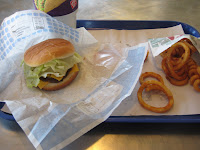 1 Response to Jack In The Box – Just Had to Pee, Not Menopause