Andy’s Burgers – Come For the Burger, Stay For the Taco

THE STORY
It was day 2 of the Metal Summit and as stories of a burger in a castle began to spread, I started getting asked if there would be another Burger Conquest. With a constant desire to please people, I quickly whipped one up. After a quick search of the interwebs, I stumbled across Andy’s Burgers. Andy’s opened in 1991 in NC by Kenny Moore for only $500. The restaurant has grown to more than 100 locations.

Known locally for fresh daily specials, homemade Mexican food mixed with all-American eats in a friendly environment, Andy’s also serves breakfast and just about anything that can be fried or cooked on a flat grill. Amy, Jason, Dave, Allie, Ian and I piled into 2 cars and braved the blazing desert heat to get some burgers.

THE BURGER
Upon inspection the burger had a West Coast style appeal Ala In-N-Out although a much larger burger. Served in a toasted sesame seed bun, I ordered mine lettuce, cheese and special sauce. At Andy’s they make ‘em how they make ‘em so no sense in asking for medium rare. A thick bun held together some lettuce, sauce cheese and a very thing burger patty. The burger was good although not robust with flavor. The large bun and sizable pile of lettuce overpowered. I wished I had known about the whole wheat bun option but it was too late. The fries were pretty standard frozen fries and weren’t begging to be written home about or blogged in this case.

On the way in, there was a sign on the door advertising 99 cent tacos and most certainly planted the idea in my brain. When I worked at McDonalds, we called the “suggestive selling.” So along with my burger and fries, I ordered one hard shell beef taco. In Spanish they say “el ganador” which means the winner! The beef was full of flavor, the taco shell was hot and fresh and the cheese was the fancy version of what we got served on taco day in our grade school cafeteria. I actually wish I had gotten a plate full of them. 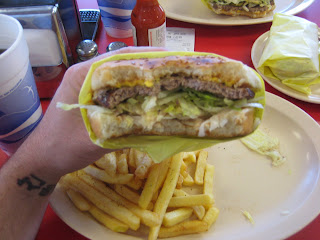 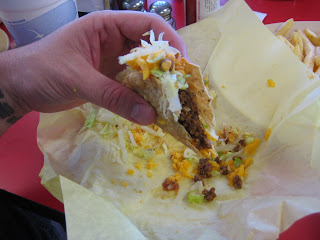 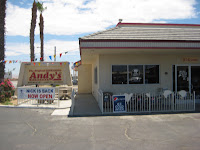 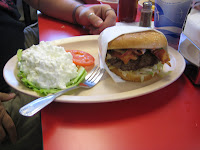 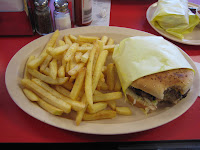 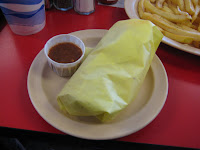 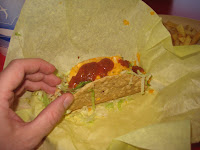 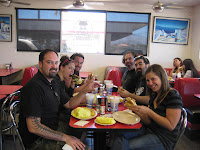 5 Responses to Andy’s Burgers – Come For the Burger, Stay For the Taco