THE STORY
Our good friend Mark Lafay, a meat aficionado, was coming to NYC as part of the “Scream The Prayer” tour with the band he manages, Haste The Day. Mark had suggested going to Shake Shack, but we weren’t sure if we all could do it since there is usually a huge line around Madison Square Park, and some of us had to get back to work. At the last minute, Rev had to cancel to go see TAT at Warped Tour in Detroit, so we decided to hit the long line and have one of the best burgers in NYC (or dare I say in the U.S. of A.) Obviously it was weird doing a Burger Conquest without Rev, but Mark, nona*, Mike from HTD and myself braved the heat and humidity, and tackled Shake Shack.

THE BURGER
Mark & Marc – “Double Stack” – a sandwich of a cheeseburger and a ‘shroom burger (crisp-fried portobello filled with melted cheese and onions), served with lettuce, tomato and shack sauce
nona* – Single Hamburger
Mike – Double Cheeseburger and a side of fries

This was actually the first time that Mark, Mike and nona* had been to Shake Shack for burgers (nona* had been once before, but only got a shake). I had been twice before, once having the ‘Shroom Burger and the other time having a Cheeseburger. But this was the first time I had them together in the “Double Stack….and I’m glad I did. Being a burger, mushroom and cheese fan, this is probably the ultimate combination of the three. The burger was cooked to a perfect medium, even though I usually prefer medium rare. The fact that they serve thousands of people a day out of a “shack” in Madison Sq Park makes it impressive that they can cook it right every time. There was a nice layer of American cheese, but nothing can describe the perfection of adding the ‘Shroom Burger on top of it. The molten cheese that fills the deep-fried mushroom adds a sharper taste that makes there no need for any condiments on this burger. The bun, which Rev always points out as a very important part of the burger experience, was a simple grilled, buttered roll that didn’t break apart and held together this amazing concoction.

THE STORY WITHIN THE STORY
While we were there, we noticed two film crews interviewing people eating the burgers. We all were laughing because it figures that one of the first “conquests” without Rev ends up being filmed for something. One of the crews came over to us and asked if they could interview us about the burger. Ended up they were from ABC News and doing a story on Shake Shack. Mark had devoured his burger already (literally took him 3 minutes), so they asked to interview me. When they asked me about the burger, me – being the great friend and business partner to Rev – said “I read on a great website called Burger Conquest that Shake Shack had one of the best burgers in the city, and I have to say, they are right”. We’ll see if it gets used in the story, or if it ends up just being footage of me chowing down….stay tuned.

Overall, we had great burgers, great friends and a great time. 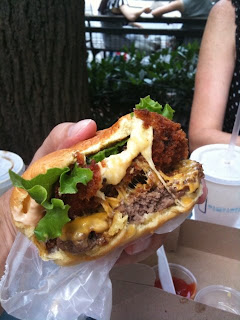 9 out of 10 ounces
-Marc Schapiro
www.baconjew.com 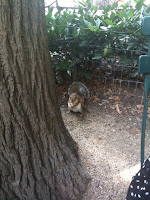 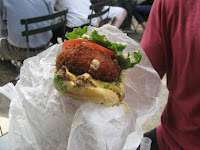 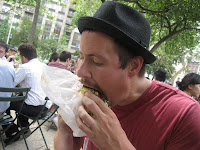 2 Responses to Shake Shack – Guest Blog from the Bacon Jew